In Defence of G.I. Joe

Four years ago I tried to bail on this monster we've created by launching a passionate defence of the Mortal Kombat movies. Surely such an assault on people's tastes, I calculated, would ensure no-one would dare listen to anything I have to say once I published it. But no, you just fell to your dirty knees and rather than rolling out from under the bar as it lowered you instead looked up from your pool of filth and said "lower please". I think this debacle says a lot more about you people than it does me. So here I am again testing quite how low we can all sink by trying to convince you that the two G.I. Joe movies aren't the visual equivalent of the sound made by a one-man-band falling down a staircase but are, in fact, utterly awesome movies.

Before I try to tie a ribbon around these turds let me first test your patience by talking a little about my childhood and what G.I. Joe (or Action Force as I knew it) meant to me. 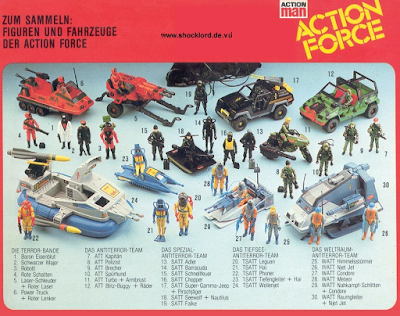 As a child I pined after my brothers Action Force collection. The adventures of Z-Force, SAS, Q-Force and Space Force and their battles against the fearsome Red Shadows and their Colonel Saunders-like leader Baron Ironblood were both exciting to act out with figures and to read about in the pages of Battle.  When they merged with the U.S. G.I. Joe figures they took on a whole new dimension and one that I fully intended spending every penny of my pocket money immersing myself in. Snake-Eyes, Destro, Quick-Kick, Shipwreck, Storm Shadow, Bazooka, Zartan and the rest of the colourful characters blew my little mind. I played for ours on the bedroom floor with the tiny articulated soldiers, my imagination fuelled further by their exploits in the pages of the Marvel UK comic. Incidentally, the cover below was my first introduction to Snake-Eyes; a character I immediately became obsessed with and, to a degree, still am obsessed with today. 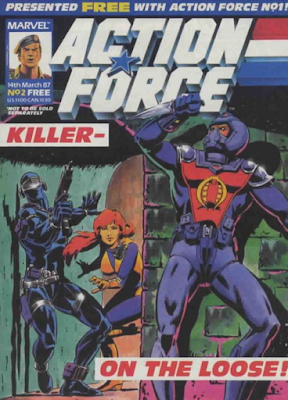 I've written about the cartoon movie and how I enjoyed it more retrospectively than I did at the time and to be honest I was pretty convinced that would the last I'd see of the Joes on screen. So when I heard a feature film was in production, even with Stephen "victim of his own excesses" Sommers at the helm, I couldn't help but be a little excited.

G.I. Joe: The Rise of Cobra is, by anyone's standards, the epitome of vapid hollywood blockbuster bullshittery. It easily fits alongside the Godzillas and Batman Forevers as an example of too much money and too little quality control filmmaking. The CGI is, for the most part, ropey as hell, Marlon Wayans is the kind of comic relief where the delivery is more important than the content (if it sounds like a joke then it must be a joke, right?) and the Joe's outfits were kinda bland tactical armour rather than the diverse and colourful designs I loved as a kid. And Snake-Eyes has a mouth. A weird, weird mouth. 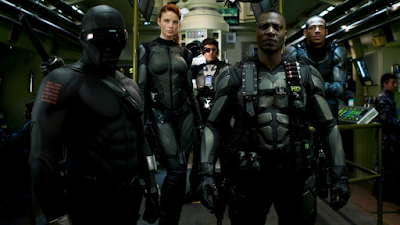 And yet none of that matters to me. Rise of Cobra has no pretensions, no larger goal other than to put as much cool shit on screen as possible. I've mentioned this before but this film has got a great list of stuff: Ninjas, jetpacks, lasers, armoured stormtroopers, mad scientists, mole machines, a master of disguise, an underwater arctic base, children fighting and so on and so forth. Not a moment of screen time goes by without something that would make my 10 year old heart throb in my much older chest appearing. It also has a fun twist and an exiting score by Alan Silvestri.

Much more than that it committed my beloved Snake-Eyes to film and despite some odd oral sculpting and weird rubberised body he worked pretty damn well. Storm Shadow and Snake-Eyes get two fights (their showdowns were big deals in the comics) and are thrilling just by virtue of existing even if they don't quite reach the epic potential promised.

Yes, I like this movie because it reminds me of a childhood spent lying on the floor racing my Snowcat around while Tomax and Buzzsaw battled with Lady Jaye and Wetsuit. Yes, it is almost pure nostalgia that drives my enjoyment. But rarely has a film captured so perfectly a specific childhood experience as this.

Except perhaps G.I. Joe: Retaliation. Despite my already pretty low expectations I found this sequal disappointing on initial viewing. It isn't quite as daft as the first one, the Joe's have nearly all but been replaced and with the exception of Snake-Eyes and Jinx still all look like everyday soldiers. Ray Stevenson, although good fun as Firefly, has a bizarre and distracting accent. Destro is again wasted. Worst of all we are denied another truly awesome Snake-Eyes Storm Shadow fight. This one starts well, but devolves into the two of them rolling around in the snow until Jinx sneaks up behind SS and puts a gas mask over his mouth.

I say that is worst of all, but actually the worse crime is the theatrical cut itself. The first movie, for all its flaws, actually got from point A to B efficiently while the initial cut of Retaliation felt more like a scattering of ideas. This cut had characters with less depth than background extras thrust into the foreground of the narrative, story beats that just didn't work and the whole affair just seemed jumbled. Like most Director's cuts the extended DVD edition does not make this a masterpiece all of a sudden but it does expand some scenes clarifying the presence of some of the characters. Flint still isn't particularly interesting but at least gets some kind of arc while Jinx is no longer this random person who hangs out with Snake-Eyes. Now they have a little silent relationship that works quite well. Alas, Jinx and Lady Jaye are both female characters with great potential who end up spending the running time trying to prove themselves to male characters. At least Jinx is spared a voyeuristic camera watching her undress in a reflection as Jaye suffers. The new cut doesn't fix every problem. 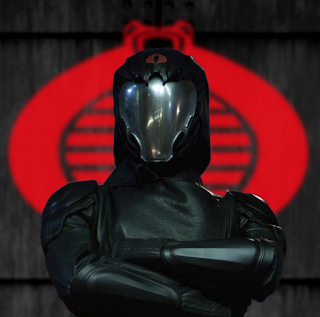 That being said with some of the plotting working much better and some characters I now slightly care about more the film feels like a story being told rather than a collection of incidents. Although not as as crazy as it's predecessor it's still pretty daft as the fantastically whacky mountain ninja showdown proves. Cobra Commander is in full evil villain overdrive (walking the tightrope of menacing and camp perfectly), the action is shot and cut with clarity and there is a laudable amount of practical work going on even in the wildest of scenes. Jonathan Pryce is having a ball as the President/Zartan and his nuclear disarmament conference is a hoot. While Rise is very much a modern CGI fuelled buster of blocks Retaliation feels curiously old fashioned at times.

Both movies, however, are made by people who understand the joy of playing with these toys. The variety of characters, scenarios and vehicles is huge and both movies cram the screen with them. You can easily picture the giant child hands guiding the HISS tanks around the battlefield (an observation I've seen a lot of people make). 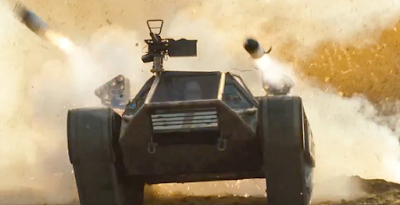 Nostalgia should never be enough to coast on and throwing a Rubix cube into the set or sticking a couple of songs from a particular era on the soundtrack can be a pretty cheap way to score some warm gooey points from your audience. With these movies the entire films have been designed to replicate a moment of childhood. They don't look or sound like the 80s' but have been painstakingly designed to feel like them for a handful of people. They are not trying to capture something superficial but rather something that only ever existed in someone's imagination. And they succeed. Real care has gone into the G.I. Joe movies to replicate something very personal and specific and for that I can't help but love these action-packed, bonkers and ultimately fun movies.

Now hurry up and make a third so I can get a proper Destro on screen.