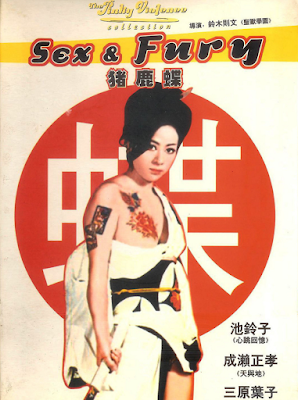 Sex and Fury is often sited as a good introduction to Japan's badass girls sub-genre known as 'Pinky Violence'. Although on the surface it appears to be a fairly standard exploitation movie it does feature some elements that makes it stand out.

The plot is surprisingly complex: Ocho is a pick-pocket and a gambler who decides to carry out the dying wish of gambler and travels to Tokyo to buy his Sister out of prostitution. While attempting to do so she gets caught in a street war between a group of anarchists and a party of corrupt business men. Inadvertently uncovering murders, political corruption and devastating secrets to her own past her rescue mission soon becomes a bloody mission of vengeance.

If you're wondering what the content of the movie might be the title of the film tells you everything you need to know. There is a lot of sex in this movie, not of all of it pleasant. There is seduction, bigamy, rape and assassination by poisoned vagina to name but a few ways in which sex is presented on screen. In fact the only way sex isn't actually shown is between two people for mutual pleasure or as an expression of love (at least not without is transgressing something). Sex is used to cajole, deceive, dominate or punish. I wish I could say this is all unproblematic but despite few scenes where care is given to the handling of sex there is a lot of blatant titillation.

It's a shame because images of traditional femininity are often juxtaposed with actions normally reserved for male leads, whether that is Swedish badass Christina Lindberg blasting away with a revolver while dressed in a full formal Victorian ball gown or Ocho hacking her way through an army of assailants while completely naked. And yet just when you think they might be going somewhere with this we see Lindberg whipping a chained and topless Ocho while dressed in a quasi-cowgirl outfit.

Despite some of the wobbly sexual politics Ocho still comes out as a badass and iconic character and this is entirely down to a superb performance but Reiko Ike. She wields a katana with the same deadly force as her sexuality but this is not just a physical performance. She is charismatic and evidences a subtle emotional range not often asked of actresses in movies such as this.

There is more sex than fury in this movie, but when things get furious you'll notice. The aforementioned naked sword fight pits Ocho against waves of assassins and is shot in a series of long slow motions takes, moving from indoors and out into the snow. The final battle is even bloodier and more ferocious. The action is great.

There is more going on in this movie than sex and violence. It is beautifully crafted, often using abstract and/or expressionistic imagery, and the story and performances are as engaging as the more lurid elements. It sometimes indulges a little too much in the more subversive sex stuff but this is an exciting experience all round.
Labels: Reviews