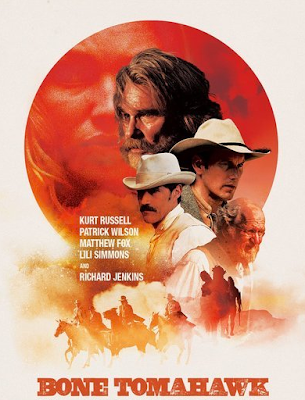 Bone Tomahawk is a film you've probably heard of, starring a cast of actors you will definitely know that was a hit at a great deal of festivals you will be aware of. That does not, in anyway, diminish the films cult credibility one iota. From its production to its execution this is niche and independent as it gets.

At some point in the old west an outlaw accidentally pisses off a savage tribe and takes refuge in a nearby town. When the tribe come to collect him they also decide to take a number of other townsfolk with them leaving it up to the Sheriff, played by Kurt Russell, and a small band of volunteers to launch a rescue mission.

Genre hybrids can be like completed jigsaws, the overall picture is clear but the joins are clearly visible. This is often due to the genres being merged having clear identifiers by way of tropes or conventions. This movie isn't interested in showing you what you think genres should be but rather synthesises two distinct genres in a seamless manner. Clearly the movie is a western and clearly there are areas of the story that swerve into horror territory. Well, flips the car onto its roof and slides its way into the ditch of horror. And yet despite leaning heavily on the horror elements it manages to do so without ever leaving the confines of the western. Don't expect gothic imagery, rolling mists and acres of negative space waiting for a ghoulish face to fill it.

This is partly achieved by being a somewhat unconventional western. Some key iconography is there but it is not homaging any of the classic cliches. The film is much more concerned with portraying an authentic frontier lifestyle than telling you you are watching a wild west flick.

Running at over two hours Bone Tomahawk is a slow burner and then some, but there is purpose in it's reluctance to race to the end. Characters are, thanks to smart writing and excellent performances, built with care and each given their own little obstacles to overcome. What's more, for a 'horror-western', it is rarely predictable. That's not to say there are any twists, not at all, but if you were to pause the movie at any scene you'd be hard pressed to say with any assurance what might happen next. Which means when things get ugly (and by ugly I mean a wince-inducing sequence that made a horror veteran like me actually say "oh no" out loud) it is all the more horrific. It doesn't have to show you horror conventions because it has spent the best part of the film making you invest in the people and their world. Had one of the characters stubbed their toe I'd have felt it for them. 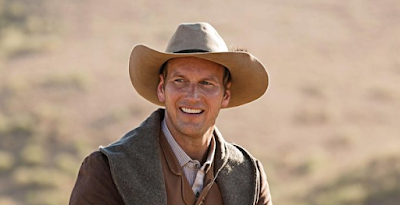 Bone Tomahawk is constructed with care and patience. it is not a wild-west shoot-em up with zombies but a movie that convinces you that you are witnessing the hardships of frontier life before making it even harder for the characters on screen. It is compelling and effortless. In short, a masterful piece of filmmaking.