I, Doctor Gogol, celebrate my creation... I mean my totally natural birth... in October and this year James Trick and another mutual friend who shall remain nameless gave me a stack of previously owned DVDs that are diverse in genre yet equal in their potential for quality. I have therefore decided the next run of my Triple-Bills shall be selected from this Birthday bargain bin based with no criteria other than what happens to take my fancy. 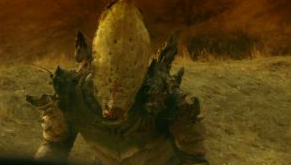 The Asylum stick with what they know: spunking out low-rent clones of only slightly higher quality productions. This particular Poundland Frankenstein of theirs shows they have their ambitions set on piggy-backing the mad critical success of the Alien Versus Predator series.
A craft crash lands in the hills of an undisclosed US town. It's passenger, a vicious alien creature, escapes and terrorises the inhabitants while being pursued by a high-tech space hunter. The unfortunate humans caught up in this must fight for survival as these two non-terran aggressors work their issues out on each other.
The good news is the cast isn't half bad. William Greatest American Hero Katt is actually really good, breathing life and character into whatever hastily assembled words where presented to him moments before shooting. He is supported by a couple of other competent turns while the rest of the more wooden performers are wisely given minimal screen time. Also good are the practical creature effects. The alien looks fairly cool and the space hunter is convincingly armoured and has this dorky helmet that looks like an old lantern with British WW1 helmet on it. I love sci-fi costumes when they are not trying to look sleek and cool and this dude is anything but.

And now the bad news.

The idea that our heroes are trapped in this remote woodland warzone should present some sense of futility or claustrophobia. Unfortunately the landscape is all rather lovely and they seem to be able to go as they please, sometimes popping to town for a discussion about what to do. In fact the bulk of the movie is this group of people wandering back and forth and talking while our cool combatants rarely show up. There is a nice atmospheric underground tunnel set, but nothing really happens in it.
Also, as cool as the monster design is in close-up, when they cut to the wide shots we see they have decided to place the practical torso on a big CGI spider body. Points for ambition, but minus points for shitty visual effects. It also means the two creatures can't actually have a proper wrestle.

I will now spoil the ending to this movie.

Katt uses a space gun found on the Hunter's ship to kill the spider creature. With his prey gone the space hunter fucks off and despite having just witnessed all their friends being murdered the survivors share a joke and plan a road trip or something. I mean immediately, as in they are surrounded by bodies and a smouldering space spider carcass as they giggle to each other. And yet the film has not finished with us, oh no. We cut to the Hunter's craft interior as it returns from the battle to chat with its on-board computer. As it does it lifts its helmet off, opens a can of beer and lights a cigarette - for the Hunter was human all along! But still from space, I think, despite the Earth beer and cigarettes. I dunno, but the "human all along" cliche is enough to count as a twist, right? It doesn't have to actually mean anything. Right?
Anyway, the movie is horseshit. It's not without its charms and I never felt compelled to tap-out but anyone hoping for some monster on monster action will walk away sorely disappointed. This movie is purely point and laugh porn.

The criminals of the future have their minds digitised and their bodies destroyed. When a portal between the digital prison and the real world opens up Special Agent Steve Falcon (yes, that really is his name) is digitised and sent in to sort shit out.
Special Agent Stephen Hawk is a tragic character because his girlfriend, played by Julie 'Darla' Benz, is blown up by an exploding picnic basket. I don't think this moment was supposed to be funny, but I thought it was was fucking hilarious. Like a Wile E. Coyote plot. It is due to this terrible loss that he agrees to get Tronned. Once inside the digital world the movie slips right into the conventions of the 90's sci-fi action knock-offs. Although there are no cyborgs or martial arts there are lots of guns with massive bits strapped on, flappy raincoats and a virtual reality sex-scene twixt Darla and Special Agent Dick Kestrel.
I'll be honest with you; I drifted off midway through. I was, however, jolted out of my daze by some sub-John Woo balletic gunplay, a twist which I 75% understand and the lovely image of Darla and Special Agent Ron Tit reunited in a computerised heaven. It's much better than AVH, I'll give it that. 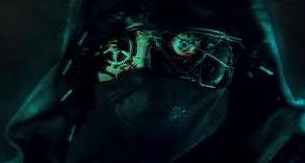 Thank Christ for The Ghostmaker, a genuinely well put together horror movie. Kyle lives a relatively cool life in a nice house with his wheelchair-bound roommate Sutton while dating his lovely girlfriend Julie. Kyle has a secret meth habit, though, and this has landed him in debt to some shady characters. Kyle takes a job cleaning and old woman's attic out (not a euphemism) and finds a weird clockwork coffin. Ignoring her warnings and instructions to destroy it Kyle takes it back to his house and after some research and experimentation finds it was built by an old German scientist who they describe as an evil DaVinci. The coffin, when activated, allows the person occupying it to astrally project and walk around like a ghost.
Kyle and Sutton's baser natures get the better of them, however, and while Kyle uses his phantom form to rob money to pay off debts Sutton uses it spy on Julie, whom he has a secret obsession with. Little do either know that with each use their bodies begin to change while drawing the attention of a spectral clockwork cyborg.
It's a cheap movie with only a handful of locations but it spends its money well. The casket is legit and the ghost forms hokey but satisfying. And let me say again: SPECTRAL CLOCKWORK CYBORG! This mechanical reaper is sometimes practical and sometimes digital but he's an awesome design and always lifts the movie.
All the performers work well and there are enough narrative strands that the story is always doing something - no spinning wheels here. The finale wraps everything up nicely, though only does that. It could have done with a really standout horror moment (a splattery death or a really memorable image) and the sexual threat lurking throughout the movie becomes more overt. It's as well handled as you can hope for sexual threat when used as a plot device and it never manifests in any actual grubbyness. But still, y'know.
So despite needing a punchier finale The Ghostmaker blows the other two movies out of the water. It will never compete with indy surprises like The Babadook, but its a solid 87 minutes of horror movie.
Labels: Triple-Bills