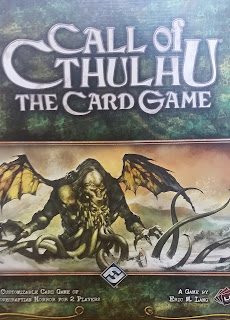 Immerse yourself in Lovecraftian mythology by joining an occult faction and competing against others in a series of battles. Manage a deck of powerful creatures and artefacts until you have a strong enough hand and then go card-to-card against an opponent, playing for a series of story cards in the centre of the table. Whoever wins the most stories is the victor while the loser is damned forever! 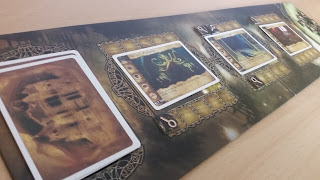 In the centre of the table lies three story cards each with rewards and punishments. Each player has a deck made from two lots of faction cards (Miskatonic Univeristy, Yog-Sothoth, Cthulu, etc), three domains (three unused cards turned upside down that serve as a discard pile of sorts) and a hand of cards that they can play or discard. Playing a card costs, and you can only play that card if you have a number of cards in the domain equal to the score. Therefore with each hand drawn you must decide which cards to discard to your domain, essentially funding yourself to buy better cards later on, or to play in order to attack or defend another player.
The aim of a battle is to win story cards so that you can reap the rewards or unleash the punishments on the other player. Battles consist of a series of "struggles" that essentially amount to comparing a variety of symbols from each player's hand. Each struggle has a different effect that can weaken your opponent further. With all the struggles complete and any special effects cards might have resolved a clear winner will be left and they can claim a victory over that story by placing a success token next to it. Five tokens and you win the story, three story cards and the player wins the whole game. 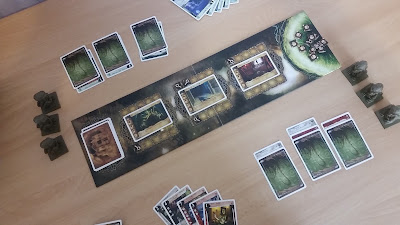 Aside from whatever strategy you may be deducing and a certain element of poker bluffing your attention will be spent mostly looking at your hand. The symbols, special rules and other elements require a pretty good knowledge of not only how the cards work together but what cards you will need to draw from your deck. Learning the cards is essential to victory but ultimately means there is little conversing between players other than checking rules. 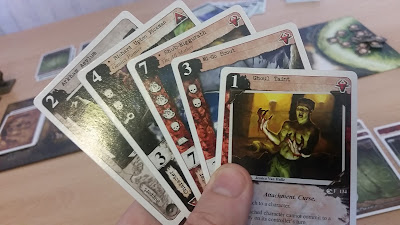 Fantasy Flight never fail to produce good quality games. Once again the materials are robust and the tactile experience is extremely satisfying. The artwork is excellent and compiled from a library images they use from across their games, meaning that there is a visual continuity across all their platforms. They even go as far as to produce some awesome plastic Cthulus to show when you have spent the cards from your domain. With so many high quality cards you could kill an hour just looking through everything. 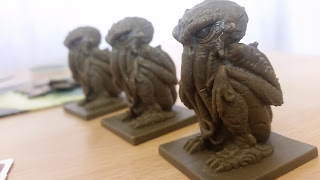 This is a tough game. Once you start playing it all makes sense but the terminology used can get a little confusing (trying to sum the game up above was really hard and I wouldn't blame you for being none the wiser having read it). The real skill is in knowing all the cards and which ones work best together and with such huge combinations this requires a player to really immerse themselves in the game's lore. This is a game for serious players who want to research and create the most powerful decks and not for the casual player. In the first game I played I lost the first few hands and found it almost impossible to get back in the game. It's a shame, because it feels like a lot of hard work and complicated terms for what is ultimately a really simple mechanic of comparing symbols. There are tournaments organised for this game and it is clearly catering for those hardcore gamers, rather than the pick up and play lot. 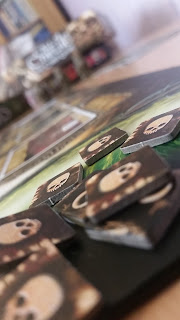 It was relatively inexpensive considering the quality and the depth of the game is immense, especially considering you can purchase expansion packs to add new factions or build up existing ones. Ultimately it never felt like fun. I only played a couple of games and even at that point I still felt I was learning it. If you love Lovecraft and want a game that you and a friend can take your time with I'm sure once your head is wrapped around it it plays really well but there are faster and funner card games out there. 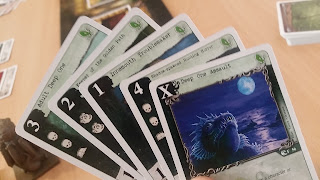