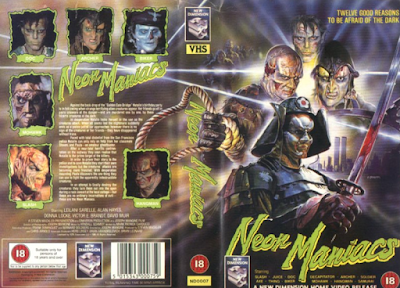 Neon Maniacs has kept popping up on my radar leaving me baffled as to why I haven't got round to seeing what is clearly a film made just for me. Well, I've finally got round to seeing it and although it does a lot of things I expected and/or hoped it would by jove I found it lacking in some pretty important areas.

Lookout! Plot! A fisherman is travelling back home one night and passes the Golden Gate Bridge. He finds a cattle skull lodged in a door and decides to inspect it. Inside he finds a series of what looks like cards depicting a variety of colourful but monstrous characters. Then he gets an axe to the back of the head. Title card! 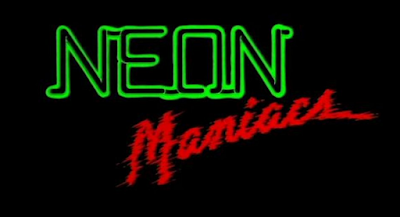 We then follow a group of teens as they drive their camper van into a local park to get up to the kinds of things horror teens do. Before long they are set upon by an army of monsters who bear a striking resemblance to the creatures on those cards. Are they fictional characters come to life? Were the cards some kind of cursed tarot? Who are these creatures and what do they want?

And I've seen the film. I have not over-simplified. I have not reduced the plot down to fit into two nice paragraphs. Nope, fisherman finds cards in a cow skull, creatures kill teenagers, no explanation is given. Ever. And that is not the film's biggest problem.

But let us start with what works. Neon Maniacs does what a lot of 80's monsters movies fail to do: not get drowned by conventions. Oh they are there, from the survivor that no-one believes to the kid who is obsessed with horror movies (y'know the one; horror masks in the bedroom, own video camera, etc) but changes enough around to make the film feel a little fresh when it needs to. Every time it gets a little bit slasher it changes gear into a creature feature. 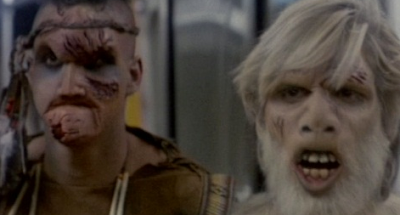 The creatures are fun by the way. You have a samurai, an archer, a soldier, a biker and, well... the list goes on. Imagine a Village People from hell. All of them are essentially wearing halloween masks or above average (for the 80s) zombie make-up. Nothing astounding but nothing too ropey. Maybe the cyclops. 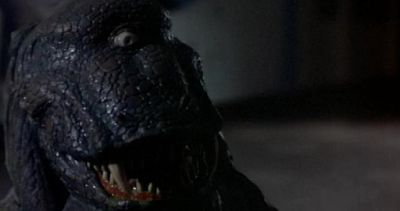 Although the human kills are fairly tame (save a nice decapitation at the park massacre) the monsters die good. They are particularly susceptible to water (don't know why) and melt, steam and explode on contact. 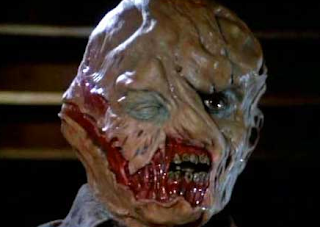 At times the film seems very cheap yet still manages to throw some surprising production value in at times. The locations are good, set pieces include a chase through a subway train that ends up on a bus and there is a really effective raining blood nightmare sequence. Going with a bunch of killers rather than a singular psycho in a mask means that the kill scenes are a little bigger in scale rather than the usual one-on-one knock-offs you often get. 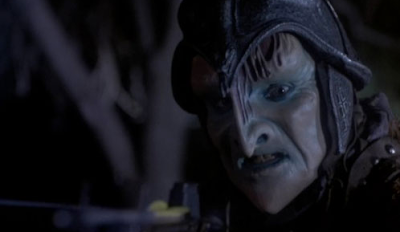 It is the ending, however, that is the real cluster-fuck. After a rather fun killing spree at a high school battle of the bands (spoiler alert - both bands are embarrassing and horrible) a few of the maniacs escape. The police, who have refused to believe our protagonists for the duration of the movie, question them while angry parents demand to know where their children are (oh, it appears the kids vanish once killed - yup, don't know why either). The cops are convinced to investigate the Golden Gate Bridge but when they get there the maniacs are nowhere to be found. Our heroes are hurried out by the cops, angry that their time has been wasted. Hearing a noise one detective decides to take another long look and after frustratingly knocking some things over opens up a door only to be snatched by the cyclops!

With the only detective with first hand experience of the maniacs dead, the police convinced our heroes are mad and a bunch of teenagers still missing how can the riddle of the Neon Maniacs be solved? Once again:

Because that is when the end credits roll. My eyes also. It would appear that the battle of the bands sequence that happened three or four long-ass scenes earlier was actually the finale despite it, nor any of the long-ass scenes that came after, offering any kind of closure on anything that happened in the film. There are very few narrative threads in this movie and all of them are left hanging at the end. I have no problem with a little mystery in movies but come on guys, give us something.

I'm being harsh, I know. This is a film made by some people that really love horror movies, have access to some half-decent practical make-up effects and a little technical know-how (director Mangine has worked as a cinematographer on a shit-ton of genre B-Movies) but little awareness of how to craft any kind of story. If you know that going in you might get some enjoyment out of it - and there is plenty of fun to be had - but it fell far short of the hidden gem I was expecting. This is mainly because despite having seen the whole movie, it feels like I've only watched the trailer.