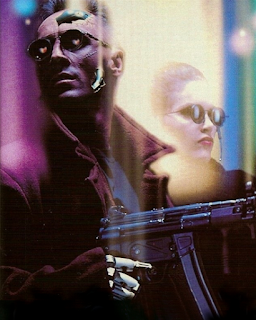 The influence of hard-edged sci-fi in the late 80s prompted an explosion of straight-to-video action movies that took narrative, visual and tonal cues from the likes of The Terminator, Robocop and Aliens. The sheer mass of these knock-offs caused a black hole effect with the conventions of other genre movies unable to escape its pull. As such, the shelves of 90's video rental shops were packed full of big-box sci-fi actioners with interchangeable locations, characters and stories all connected by a skeleton of re-occurring conventions.

These movies displayed a fetish for chunky firepower, often in the form of custom built future weapons or regular guns with ludicrous silver attachments. The Cyborg Cop and Nemesis series favoured these as did individual movies like Digital Man and Prototype. It was as if each film was trying to out-do the pulse rifles from Aliens or Robocop's machine-cannon. These large guns were part of larger preoccupation with excess these movies had. Everything needed to be bigger, bulkier and more stylised from actors physiques and costumes to the saturated cinematography and exaggerated violence. These weren't just big guns, but they made big holes in people.

Even the effects of regular handguns were exaggerated to absurd levels. The exploder gun from Dark Angel could turn anything it hit into a column of flame and despite being constructed by intellect and materials of alien origin it looked remarkably like the Calico 950 machine pistol used in a lot of action movies of the 80s and 90s (Tango and Cash to name but one). The guns were bulbous and clunky devices used to puncture the bloated stomach of these movies, spraying the screen with geysers of excess.

The T-800, face gashed to reveal a metallic skeleton, imprinted itself into the minds of a number of filmmakers. Like staring into a lightbulb and then seeing it every time you close your eyes this image constantly repeated, the luminescence fading each time. Pretty much every movie I watched as research for this article featured cyborgs and many involved those cyborgs wrestling with their own consciousness a la Robocop. Some would have a metallic body under human flesh while some would have a human mind inside a metal suit, but all essentially performed the same narrative function. And of course if you have an odd non-human you have to team them up with a sardonic, motorbike riding all american muscle-slob hero cop for some forced buddy-cop antics.

Cyborgs, or occasionally aliens, functioned as The Other; a form with elements of humanity but with enough to separate them from the rest of 'us'. I don't believe this was a conscious, ham-fisted attempt to critique any group of people, although I found the amount of robotic prostitutes in these movies a little disturbing.

Your 90s knock off isn't going to work unless you find yourself some kind of industrial location to stage a shoot-out but you're only really in the club if you stage it in the ocre-frosted remnants of a steel mill. Orange grit, rusted metal scaffolding, colossal concrete obelisks and half collapsed pipes were the common panorama of these movies and could be expected to appear as often as cyborgs. Look at these stills, each one of these was from a different movie!

Thematically they are appropriate but ultimately this a production choice. The locations were clearly evocative, practical to stage explosions and stunts and probably cheaper than shooting in active areas. I wouldn't be surprised to learn they all the same place.

Unlike the movies they were based on these knock-offs featured a considerable amount of martial arts. Often starring film fighters who were orbiting B-list cult status (Billy Blanks, Matthias Hues, Olivier Gruner, Don 'The Dragon' Wilson, etc) the movies exploited their athletic prowess to the fullest. TC-2000, Nemesis, Cyborg Cop, Cyber Tracker and Digital Man all featured actors performing spinning punches and reverse round-house kicks and wouldn't shy away from oiling up their shirtless heroes as they did.

Obviously fashion sense is going to differ and any hack can laugh at the bizarre wardrobe choices made during any era not their own (clearly there had been some sort of sleeve drought during the 90s). However a lot of these films not only went with bold hair choices that stood out even amongst the other cast members, but were also immaculately cared for. Like the wigs of Georgian times these were the mark of a powerful presence, an externalisation of internal fortitude. 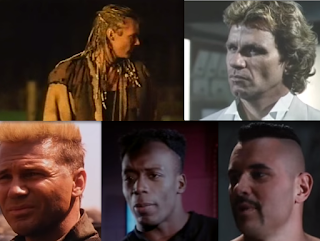 Where there's smoke there's fire, and where there is a cyborg questioning its humanity while gunning down endless rows of human fodder there is the evil corporation that created it. From their glass towers, draped in enormous shoulder pads and flanked by pony-tailed bodyguards these evil corporate shits play with life like they are assets on a spreadsheet. And if it's not a company, it's an increasingly privatised military.
The Project Shadowchaser series, Digital Man, and Cyber Tracker series all feature nefarious groups pulling the strings on these metal and flesh puppets. They will monologue about omelettes and eggs, and the greater good but ultimately right will win out. Well, in Cyber Tracker the heroes defeat the evil Corporation then discuss the merits of Ayn Rand... let's just say 'movie right' will win out. It is an interesting contradiction seeing an organisation who creates shallow copies of humans for profit placed as the villains in movies made by organisations who create shallow copies of movies for profit.

Since we are dealing with cyborgs and super-guns then it can be assumed that most of these movies are in the future. But don't rule out the occurrence of time travel. A.P.E.X., Time Guardian and Future War all involve temporal shenanigans of some sort.

Everyone loved the armour-plated marines in Cameron's Alien sequel right? So let's fill ours with the same! Digital Man, Prototype and A.P.E.X. all put clunky and plastic armour on their military forces. 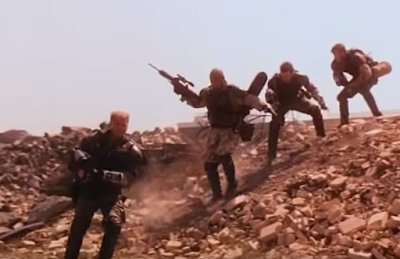 If the action is set in more urban areas there will be some kind of slow motion car stunt which, in most cases, will be awesome and make you wish more modern action films treated car stunts in this way. It's also not uncommon for a movie to throw in a Die Hard style building siege, especially if your title has the word Shadowchaser in its title.

Let us also not forget the following shot of a helicopter exploding which I have seen occur in no less than three movies I saw over the two months it took me to research this article. 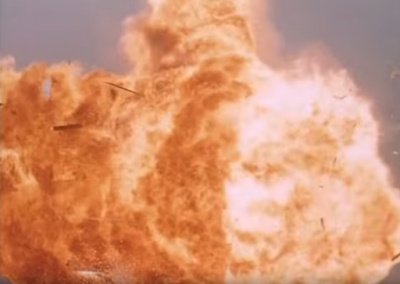 So what do these conventions add up to? Most of these films are designed to cash in on more successful projects and as such often feature a muddled ideology that places technology as a danger yet equally revels in it. As pieces of entertainment they don't always succeed either. TC-1000, despite showing Bruno Mattei levels of rip-offery in its opening, is ultimately flat and un-compelling at an even basic level. Prototype and Digital Man both have a cool looking robot suit and exciting action editing but ultimately play sluggish. Prototype, in particular, is po-faced to the point of being no fun at all.

Shadowchaser has an awesome trailer and is just about ridiculous enough to engage but leaves you wishing it were more entertaining. Both Cyber Tracker and Cyborg Cop maintained the right balance of competence and incompetence but probably won't get a re-watch. In fact of the movies I watched only Nemesis really felt like a good movie. It's big, bold, well-produced and shot and featured enough craziness to warrant a repeat viewing. It constantly bests its previous scene and culminates in a hokey but fun fight with a stop-motion endoskeleton.

There is one movie I have yet to talk about. It is a movie that, with the exception of time travel, features all of the conventions discussed in this article. That movie is T-Force. 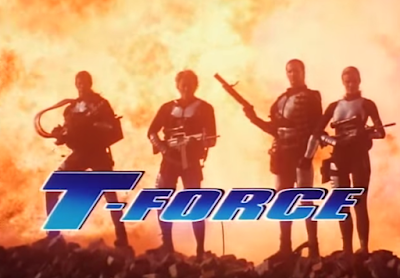 T-Force begins with a group of terrorists taking over a building, a problem that is resolved by sending in a group of cybernetic and armoured troopers to kill the bad guys and rescue the hostages. Their approach to collateral damage, however, results in human hostages and the corrupt company that produced them comes under fire. When the cyborgs refuse to shut down they go rogue and it's up to a divorced, technology hating cop and the one cyborg that retained its humanity to track down the rogue droids and destroy them. This film features cyborgs, car Stunts, martial arts, a siege, a shootout in a steel mill, immaculate hair, an evil corporation, nudity, buddy-cop antics, is set in the near the future and has armoured marines. It is without a doubt the ultimate 90s sci-fi action movie and by default almost impossible to not enjoy.