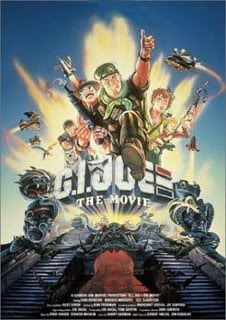 As a kid my Saturday mornings were dominated by He-Man, Thundercats, M.A.S.K. and The Transformers.  On the other hand Action Force, or G.I. Joe as it is more widely known, dominated my toy box.  A feature length animated movie, therefore, drew my childlike attention.

Transformers: The Movie was something of a traumatic experience for fans.  In the first fifteen minutes all the classic heroes are violently slaughtered and the rest of the film is given over to mostly brand new characters.  In addition, most of the action takes place in a variety of strange planets as opposed to the earthbound locations of the weekly series.  It was all new and exciting but, at the same time, a little unsettlingly as it bore little resemblance to the cartoon kids were used to.  Although less extreme, G.I. Joe: The Movie does much the same thing.

It opens with an exciting title sequence that depicts an epic battle between the heroic Joes and the villainous Cobra.  As a child fan of G.I. Joe it’s impossible not to be excited by this sequence as it features all of the main characters, many of which get nice moments of action (check Snake-Eyes taking out the Cobra flight pod in one deft move).

The story begins with a strange assassin breaking into Cobra’s Terrordrome using weird organic weapons to take out security.  She eventually confronts Sepentor, the genetically engineered leader of Cobra, and gives him a mission to undertake.  Those familiar with G.I. Joe will be aware that traditionally Cobra Commander is, as his name suggests, the leader of Cobra.  Yet here he is reduced to a snivelling second-in-command.  Aside from Serpentor, a new character created just for the movie and this mysterious assassin, all of the regular Cobra characters are present in these early scenes.  Likewise when we are whisked away to an icy landscape to meet the Joes, it is all very familiar faces.  When the two collide in the first major battle of the film, great care is taken to ensure that as many of the key characters and vehicles from the toy line are used. 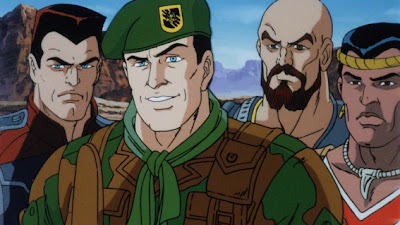 So at this stage you would be forgiven for thinking the movie was going to be far more conventional than the feature length bloodbath that is Transformers:  The Movie.  That is until the film takes a strange and somewhat Lovecraftian turn.  As the battle rages it is joined by weird organic creatures that reveal a secret world hidden in the snow-capped mountains.  Cobra-La, a place of bizarre monsters and technology, is an ancient civilisation planning to destroy humankind and reclaim the world as theirs.  It is a place where insect-like beings, reptilian monsters and fish-like creatures form both the populace and the technology.  Weird bug-like drones travel around in living piscine flying ships, prisoners are interrogated while trapped in giant clams and there is even a giant vagina dentata used to travel in and out of the city. 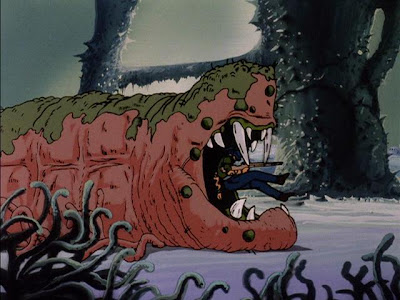 It also introduces three new key characters; the mysterious assassin and her squiddy weapons called Pythona, the awesome and iconic winged strongman Nemesis Enforcer and the bio-tech nightmare that is the ruler of Cobra-La, with the wonderfully grotesque name Golobulus. 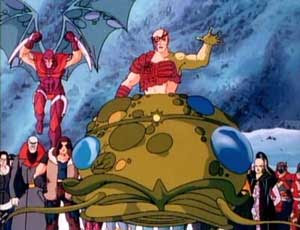 More than this it is revealed that Cobra Commander was once a scientist of Cobra-La and was placed into the human world to create Cobra.  Cobra, it seems, isn’t really a terrorist organisation but actually a force designed to prepare the world for the return of this hideous and ancient world and their transformative spores with which they intend to turn humans into snakes.

So not especially traditional after all.

The film isn’t quite as ruthless with its characters as Transformers:  The Movie, though there is a little blood spilt and Cobra-Commander, continuing the Lovecraftian themes, is slowly transformed into a hideous snake creature.  Additionally a lot of the classic heroes are imprisoned for most of the film and newer characters introduced to rescue them. 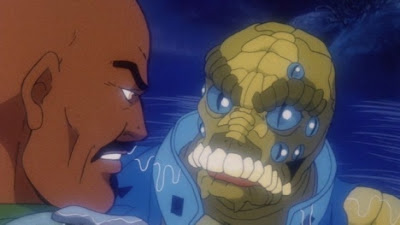 Understandably fans where a little perturbed by not only the change in genre from high-tech action to sci-fi horror-fantasy, but to the revising of the whole nature of Cobra.  Yet as a child who only played with the toys, and was therefore not as invested in the canon as many, I found the changes really rather exciting.  As an adult watching it back the whole thing seems so ballsy I can’t help but have some degree of admiration for it.

G.I. Joe:  The Movie is only slightly better animated than most Saturday morning cartoons of the time, yet it features a fairly interesting list of voice talent from the familiar vocal talents of seasoned artists like Peter Cullen and Chris Latta, to actors such as Don Johnson and Burgess Meredith.  But more than that it is a weird example of a gamble that kind of pays off.  Toy soldiers mixed with H.P. Lovecraft and served up for kids?  Count me in. 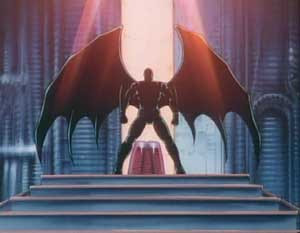