I am by no means against CGI yet firmly believe that bad practical effects at least have presence and, for me, charm.  Bad CGI, by contrast, feels like a placeholder, something sat there to fill space awaiting the proper effect to be added later.  I have been drawn in by a number of movies that have promised fantastically imaginative creatures doing all sorts of absurd damage to public property only to feel like I’m watching an animatic for a yet to be finished movie.  No surprise then that I hesitated.

To say the CGI work in Dragon Wars is perfect would be an exaggeration.  There are a good few moments, especially in crowded scenes, when the effects drop to the quality of video games.  The majority of the film, however, maintains a high enough level of quality that I can watch without being thrown out of the moment.  This, alongside the imagination on display, results in a giant monster movie as enjoyable and as daft as any Godzilla movie.

Based on a Korean legend, Dragon Wars revolves around two sacred snake-like giants called Imoogi.  One of them is destined to ascend into heaven once it has consumed the life force of a pre-chosen sacrifice.  The forces of evil and their Imoogi want the power and it is up to the forces of good to stop them.  This battle plays out in ancient Korea and ends in a stalemate.  500 years later and the ritual can take place again.  The re-incarnated sprits of the key players, now unknowing residents of Los Angeles, are spurred into action by the emergence of the evil army and their malicious Imoogi. 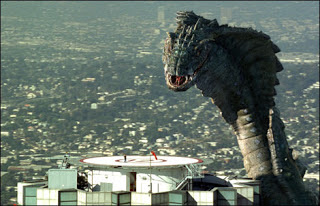 If it all sounds a little bit fairytale it's because it is.  Yet it does mean that there is some interesting stuff going on between monsters sequences.  The evil army are cool looking armoured dudes with rocket launcher wearing elephant-ish beasts and fire-breathing mini-dragons at their disposal.  The benefits of the fairytale story means that logic can be overlooked in favour of imagination.  At one point the action moves to an awesome looking giant evil fortress that seems to come out of nowhere, yet it can be easily explained away with magic. 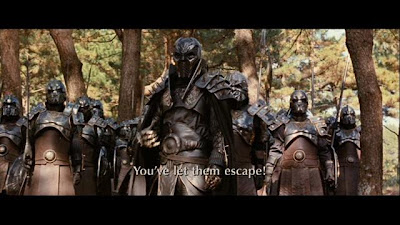 Although Korean-made the setting of the action in the US results in some recognizable faces popping up.  Robert Forester and Craig Robinson, amongst others, crop up and give some affable performances.  On the down side the two leads seem to have because of their pretty faces rather than their ability to engage an audience.

But it is when the shit hits the fan that the film really comes alive.  Dragons versus gunships, tanks vs lizards and a giant devil snake coiling itself around sky scrapers.  All of this is captured with a frenetic and exciting aesthetic while boosted by Steve Jablonsky’s cinematic score

The end battle twixt good and evil Imoogi is nicely rendered and the design of the Dragon, once it has ascended, is wonderful and has beauty in its movement.

Dragon Wars is a b-movie though and through and your enjoyment of it will entirely depend on your acceptance of that.  Yet although at times it can look inexpensive it certainly isn’t stingy on ambition. 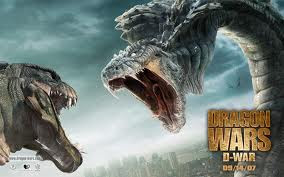