In Defence of Mortal Kombat

Like O.J.'s defence council you may think I'm onto a losing battle here. If not, let me help you arrive at that conclusion. I am not only going to argue that Mortal Kombat is good, but that the sequel is better. 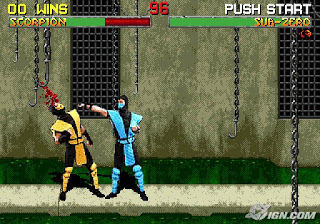 Ever since the Megadrive version of Mortal Kombat 2 beat my imagination into a swirling daze then roundly finished it with a cheeky spine removal, I have been convinced the Mortal Kombat games would make for utterly astounding genre cinema. The universe in which these games are set features elements that have proven extremely popular over the years, elements such as marital arts, large scale fantasy, the supernatural, brain splattering violence, and an Eastern flavour. A Mortal Kombat movie with a budget and a skilled director behind the lens could be The Lord of the Rings meets Ong Bak meets Big Trouble in Little China meets The Evil Dead. Or, put another way, piss-your-pants awesome.

Which brings us to Mortal Kombat (Paul WS Anderson, 1995), pretty much the opposite of everything I described above. Here the Mortal Kombat universe is not treated with any integrity nor is there really any attempt to make the property cinematic. Instead it tries to capture the video game aesthetic, thinly stringing arcade set-pieces together with a narrative of sorts. This should, by all rights, disappoint and/or enrage me. Yet it is hard to dispute by its own low standards it is successful. 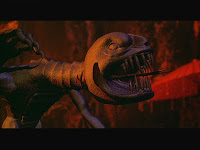 The key characters from the game are there and they all get to fight on screen. The environments in which they do battle are at worst derivative and at best imaginative. The story just about holds things together and gets you from one dust-up to the next. The CGI is bad. Worse than Lost in Space bad. On a par with The Lawnmower Man bad. But remember, Anderson isn't aiming for 35mm, he's aiming for 16bit. 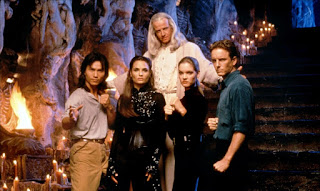 The casting is patchy. Cary-Hiroyuki Tagawa delivers his ever-reliable scene-eating villainy, ill-fated potential action star Trevor Goddard is good value despite his absurd British accent (all the more absurd considering the guy is actually British) and Christopher Lambert again forgets he's French, here playing a Chinese lightning-god. Everyone else is okay, but nothing exceptional. Linden Ashby and stunt double are fine as the charismatic Johnny Cage, yet why not hire an equally charismatic martial arts star who, y'know, could actually do the martial arts required? Surely Jeff Speakman wasn't busy? Remember Jeff Speakman? No? Just me then...

The martial arts themselves are quite exciting all things considered. At the time this was released martial arts in mainstream Western cinema consisted of, if you were lucky, Van Damme slo-mo round housing Bolo Yeung seven times. But these fights, brief as they are, are acrobatic and skilful and, for the casual cinema-goer of the time, possibly their first exposure to proper martial artists.


What is lost, however, is the ultra-violence. There are a couple of deaths and some horror conventions do creep in, but it is an ultimately bloodless affair. Yet we are not short-changed, oh no. For while Anderson steals hardcore violence away from us he compensates us with middle-of the-road, um... I want to say Techno?


Whatever it is, it should be an entirely inappropriate theme for an epic fantasy set against a conflict twixt Eastern gods and demons. Yet it has a relentless energy and cheer that is kind of endearing, much like the film.

Mortal Kombat is appalling, obviously, and should piss me off no-end. But it is aiming so low it cannot help but succeed. It's like an infant's first drawing; yes it's basically scribble, but meets expectation and is kind-of cute.

Mortal Kombat: Annihilation (John R. Leonetti, 1997) carries on directly from the first (narratively speaking). Narrative, however, is not of interest here. Nor writing, nor acting. The budget takes a hit and as a result so do the visual effects. Not even Lambert returns. Ashby didn't even return. So what do you do get? 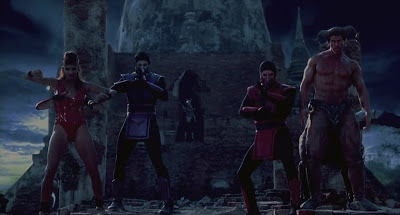 Ninjas, robot ninjas, a man with robotic arms, a centaur, a native american werewolf, mud-wrestling, James Remar as a Chinese god, our protagonist and antagonist turning into giant dragons, a four-armed woman, people wearing just enough clothing for it not to be pornography, a toothy monster with swords for arms, this exchange:

If you know the game none of this is a surprise, but viewing it without prior knowledge must make the films seem so brilliantly random. I urge you to forget this was based on a series of video games and rather imagine these are ingredients someone actually thought would make for a good film, it is so much more fun that way.

The film even manages competence at times. Even, dare I say, moments that are quite good. The fights are significantly improved.


The above fight is favourite of mine as it ticks so many boxes for me. It's a little bit ninja, little bit superhero, little bit Temple of Doom. And that is a cool set. The wonderful mess that is Mortal Kombat: Annihilation is peppered with kind-of cool moments like this showing that the creative minds behind it where using the lack of narrative as a strength, whizzing us from absurd moment to baffling happenstance.

The first Mortal Kombat is like a horribly catchy tune. It isn't good and you know it, but it has enough to hook onto your brain and is somewhat endearing as a result. Mortal Kombat: Annihilation is the dubstep remix of that same song. You may wonder what the hell they were thinking and that it sounds kind of cheap, yet that doesn't mean you can't admire the imagination and insanity of it all. 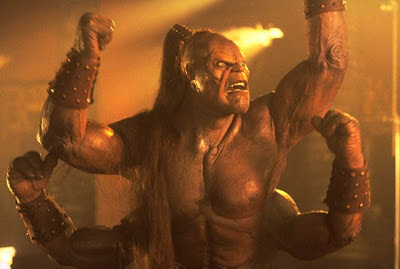