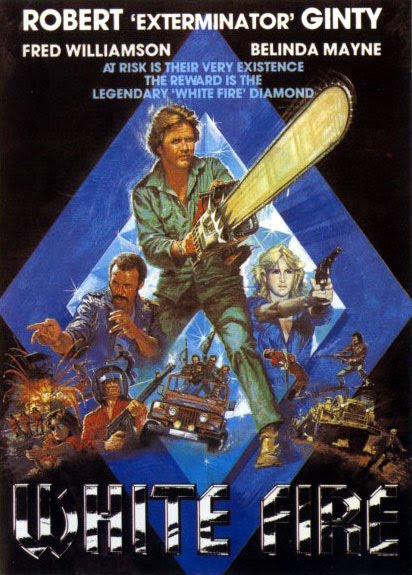 I like to think of White Fire as being something of a kindred spirit to Ricco the Mean Machine. Both have a great poster, an interesting cast and an edge that separates them from other run-of-the mill action thrillers. Whereas Ricco has enough absurdities to make the more unpleasant moments easier to digest, White Fire has very little going on at all. So while my Ricco review was a cautious recommendation of sorts, the purpose of this review is to save you the trouble of hunting the film down and watching it for yourself. Everything you could hope to get out of it you'll get right here.

First off, that is a great poster. So great, in fact, that it was the sole reason I got myself a copy of the film on DVD. Having Fred Williams in your film also can't hurt, yet like Ricco the film suffers from a less than conventional action lead. Robert 'Exterminator' Ginty (as he seems to be billed in everything he appears in, to the point that I suspect Exterminator might actually be his middle name) looks like a dog Barbara Cartland might own if it were having a really horrible hair day. 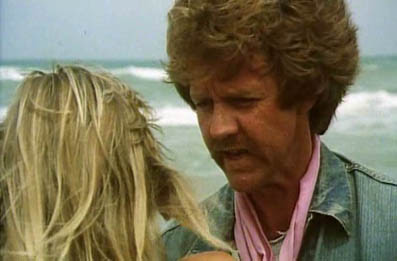 But he does carry a chainsaw in the film, which is awesome. What is more awesome is that the film doesn't wuss out. Oh no, that chainsaw does some damage. Check out the unusually bloody trailer:

I won't recount the plot because even having seen the film I don't know what it is. Beyond the poster, the splatter, the chainsaw frenzy and Fred Williamson there is absolutely nothing going on. The film has a narcoleptic narrative, prone to dropping off and leaving a screen absent of anything even remotely engaging.

That is not to say the film hasn't nothing that makes it stand out. One scene in particular makes the film kind of unforgettable. Like Ricco, this is not a good thing.

Ginty's character Bo is accompanied on his adventure by Ingrid. At about the half-way mark (if memory serves me correctly) the obligatory unnecessary nude scene crops up. Ingrid is having one of those late night naked swims that absolutely everyone (except, perhaps, men) has in films. After ensuring the camera has got everything it needs to, she leaves the pool and takes a shower. Now extra sure the camera has everything she raps a towel round herself.

It is then she notices Bo lurking on a balcony above like a creepy ball of fluff. He jogs down the steps to see her for a chat. A little way into their conversation he suddenly decides to whip the towel off her, rendering her naked again, and refuses to give it back to her while she stands in front of him giggling. He eyes her up and down as she half-heartily bargains for the towel back. As flirting goes it is as awkward, embarrassing and, well, weird as it sounds.

And then you remember they are playing Brother and Sister.

If that wasn't enough, he even goes onto say “you sure don't look like anyone's kid Sister anymore do ya?” and “y'know it's a pity you're my Sister”. It is not often a films hero can make you throw up in your mouth.

The scene stands out like a sore, awful, thumb, as if it where an off-colour joke meant for the cutting room floor but accidentally left in. Thankfully that narrative thread is never returned to. I believe some kind soul has uploaded the scene to youtube if you feel the need to verify my claims.

And that is all there is to it. The few good bits are in the trailer and the poster is better than the trailer. Consider this a mine avoided. A mine that would have exploded in a great ball of boredom and incest. 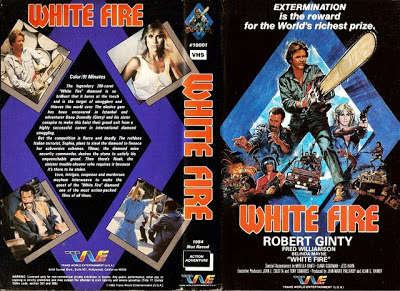