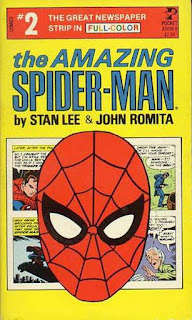 Delving into the wonderful world of comics, Trick & Gogol get their hands dirty and discuss the comics that shaped their childhoods and corrupted their adulthoods.. And just what the hell did Trick once see in a Spider-Man pocketbook that scarred him for life?

Writing obscenities on a Barbie doll
"We haven't mentioned comics yet"
Packs of American comics
Tossing Batman and Superman
A large petri-dish full of bodily fluids
Comic adaptations of films
That girl in Dragonslayer
Time Bandits comic
Little Shop of Horrors comic
Spider-Man pocketbook freaks Trick out
'Murder Magic'
Goat-skull billboard
Comics are expensive
Why are comics for kids?
"You're a bit old for that"
Eagle and Doomlord
Death Wish (not the Charles Bronson one)
My first Daredevil comic
Labels: Podcasts