Film and the Immersive Experience 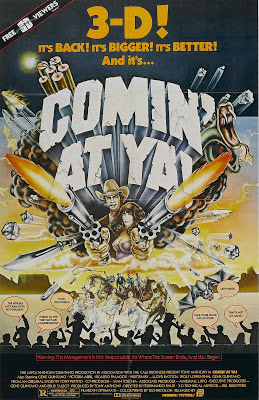 Some have proclaimed that film is either dying or dead. Many attribute this to the benefits of digital film-making, but this article is not about that. For the purposes of this piece I am not referring to film as defined by its physical properties, rather film as an output, a product or as art. In other words, the ninety minutes plus of contained visual storytelling, intended for viewing in mostly one sitting that we refer to as film (regardless of whether a single frame of film has been exposed in its production or not). Film, in that context, still has a healthy lifespan ahead of it yet it is currently going through something of a metamorphoses. Into what? Now that is what this article is about.

Cinemas have been trying to find ways to drag people to their screens ever since television provided a way for people to watch visual media in their own homes. Now that many people can watch a film or television show wherever they are in the world, in addition to the fact that current television shows can be as cinematic as some feature films, cinema is having to pull out every trick it has to get people's arses in its seats.

3D is not new. The first screenings of 3D film took place in the 1920’s and the technique has been rolled out to cinema goers on a regular basis ever since. The current trend for releasing films in 3D seemed like a good idea at the time, yet almost immediately 3D televisions, hand-held games consoles and camcorders flooded the consumer market. Another victory for revolutionaries in their fight for equal entitlement, or a respected and dignified aristocrat pulled from position and thrown in the shit with the rest of the peasants, depending on your view (for what it is worth, mine is the former).

IMAX is something of unique experience as it changes the very canvas onto which the light is painted. Sometimes utilising 3D, IMAX can be at times an overwhelming experience and one that immerses you to a degree that you are given a choice as to on what part of the screen you will focus your attention. IMAX gives you the power to adjust the director’s vision, re-framing to your own demands making it not just immersive, but ever-so-slightly interactive. The ideal? An awesome assault of visuals filling your peripheral vision with cinematic artistry forcing you to experience rather than observe. The risk? Live pan and scan.

Faster frame rates are the next big cinematic experiment. Peter Jackson’s The Hobbit is being shot at 48 frames per second and in 3D. Early promotional soundbites suggested that it was as if there was a hole in the wall where the cinema screen should be; so real it is like you are really there. Like all the above techniques, however, it has its detractors. My problem, however, is not with the individual issues that each of the techniques have but with the ethos behind them all:

The idea that film should be an immersive experience.

As the image fills your eyeballs and objects float out around you, all in frame rates desperate to capture movement the way the human eye does you, the audience, are being asked to participate in the events unfolding. And who knows what the future holds? With the recent Tupac ‘live’ performance via hologram, who's to say once the consumer market is flooded with giant home IMAX systems that pioneers won’t be desperately trying to find a way to extend sets out of the screen so that they surround the audience. It all sounds extremely exciting doesn’t it?

But that is not what film is about. Yes, film should always aspire to be emotionally and intellectually immersive but that is not the same as trying to put people inside the events. Film is, for me, a medium used to understand how other people view the world. How a director frames an image tells us everything about how they see and then interpret everything around them, it is a way of communicating their imagination and interpretation of the world to an audience. That audience may be asked to become involved with the drama, or to consider the concepts explored, but we are always observers. Even when we are not given all the answers, when we have to work hard to piece together concepts and narratives to form our own ideas, it is still the filmmaker in control.

The moment we are immersed totally is the moment we are given choice. It is then that the film has escaped beyond the confines of the director's frame and we are able to frame the images ourselves. We can choose what to concentrate on, or what narrative to follow. We can even create our own narratives. The moment the world represented on film becomes our world it ceases to be the world of the directors. When we, the viewer, are so enraptured by the realism of the grass at our feet than at the subtle drama unfolding between two characters we find ourselves in an entirely different medium altogether. Whatever it is, it is not film.

That does not mean I cannot appreciate this new medium, whatever it is. I love seeing films at the IMAX, I cannot wait to see what 48fps second actually looks like and I am still desperate for 3D to really work well. In the application of each of these techniques there can be meaning and artistry. Yet at what point is the line crossed that redefines what it is that is being created?

Am I being pedantic? Does it matter what we call the experience? Who cares if I see I watch a TV show and call it a film, or listen to a piece of music and claim I’ve read a book?

If you were hoping for a more academic conclusion then I’m sorry. As much as I understand, appreciate and respect film I love it first and foremost and love, as we all know, isn’t something that can be intellectualised.

Regardless I should at least try and finish with some kind of conclusion.

Maybe it is not film that is changing, but cinema. Maybe in the future films will be something watched at home and this new immersive medium is what we see at the cinema. That is until the technology is made available for home use and the whole cycle starts again.

To be honest, as much as I don’t like to play the cynic, I can’t help but think that these developments will be fads that come and go and that films will remain films, wherever we choose to watch them.
Labels: Articles