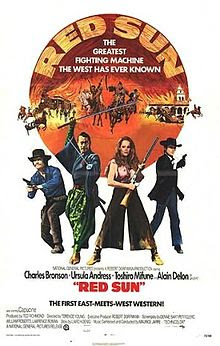 I have always been fascinated with the iconic mythologies of countries and how they re-occur in their cinematic output. I particulalry like it when these mytholgies clash. Unfortunately it can often be at the expense of one of the cultures.

The all-american cop who is partnered with an international counter-part, usually asian, whose odd customs and almost supernatural abilities help solve the case is all too familiar. Yet these films are not so much about finding some common ground and respecting what differences are left, but rather painting the outsider as 'other'. If the alien cop can survive the racial slurs and learn to loosen his values he may well earn the trust of the people slinging those slurs at him in the first place. His mission is to merely justify himself to the audience.

On paper, Red Sun sounds pretty much the same and though it dances close to the above conventions it never treats the outsider with anything other than respect.  Considering this is something of an international affair, that's no surprise.

Outlaws Charles Bronson and Alain Delon rob a train only to find a Japanese ambassador and his Samurai guards carrying a golden sword as a gift to the American President. Delon steals the sword leaving Bronson, his partner, for dead. Fearing disgrace, the surviving Samurai, Toshiro Mifune, teams up with a Bronson to track down Delon and retrieve the sword. Aside from having a western with principle characters that are from three very different countries, the main female characters are played by Ursula Andress and Capucine and was shot in Spain under the direction of the very British Terence Young (who incidentally was born in Shanghai).

As Mifune and Bronson search the plains they form a begrudging respect for each other. Though Mifune takes on the role of the outsider and his martial arts ability and unwavering discipline initially present the character as alien and otherworldly, the film quickly places the two of them on an even keel.

Their relationship is quite interesting. Although their primary goal is the same, their motivations are very different. Mifune wants to regain his honour by slaying Delon at first sight, while Bronson wants Delon to lead him to his share of their spoils. At every stage of the film the threat that one might betray the other is present, yet they both fully understand and respect this and neither character is portrayed as any more distrustful as the other.

It would be remiss of me, however, to not mention that despite all this wonderful multi-culturlism the Native Americans are reduced to whooping savages. Whereas the main characters are icons, these poor buggers are nothing more than stereotypes. I guess you can't have everything.

And that is not the only problem the film has. The action is efficient, but rarely either brutal or exciting enough to fully monopolise on the potential of having some major Bronson/Mifune ass kickery/choppery. Don't get me wrong, they do get their share of action and blood is spilt, but it is never to the level one would hope. The visuals are much the same in that they do their job but that's about it.

That being said the brief Samurai vs Comanche sword on spear fight set against a burning field is pretty cool, but nothing else in the film quite matches it. 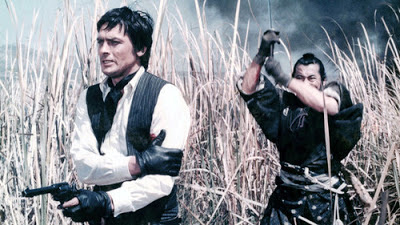 Regardless, there is a lot to like here.  It's so refreshing to see a film that treats its international characters with such respect. Not only that, but have another look at that cast.  These are not just international actors, but truly iconic ones. Bronson and Mifune work well together and the Maurice Jarre score is sparse yet effective.

Red Sun remains a fun little entry into the East meets West films that treat its conlficting cultures with equal respect. It may never reach its full potential but it has a bloody good go and is well worth your time. 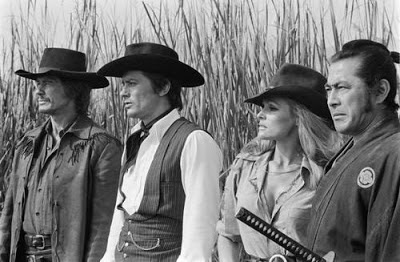