Stop me if you’ve heard this one before.
When I was about six years old, in 1980, I bought a copy of Spider-Man pocketbook. To this day, I can tell you the newsagent I bought it in and I can remember how excited and happy I was to have a new Spider-Man comic. Cover price of 15 pence, coughed up by my brilliant Mum.
I loved Spider-Man. He was my favourite superhero and carried with him that odd sense of security that is such an important part of childhood. Kids like to know where the boundaries lie, and I felt I knew the rules with Spider-Man. I knew that his universe could sometimes have slightly scary bits. I knew that sometimes people died. But Spidey’s universe felt comforting despite the bad bits, because your friendly neighbourhood Spider-Man would sort it out.
As anyone who listens to the podcasts regularly will know (and I think I’ve actually banged on about this on three separate occasions in the past year), that particular issue of Spider-Man pocketbook wasn’t destined to be a good experience for me. It had an illustration in it that utterly freaked me out; a picture which has been hovering around the fringes of my consciousness ever since
The basics: a stage magician levitates a volunteer. The man in the air comes to pieces; head and arms floating off. The now-corpse has a horrible blank expression on his face, and someone in the audience shouts out that the man is dead.
I describe my memories of it in the podcasts far better than I could do now, because now my memories are contaminated. Because, this week, I found it.
The illustration is at the bottom of this page. To scroll or not to scroll? If you look at it before you’ve read what follows, will my memories become laughable? If you look at it afterwards, will it have been built up way, way too much? I almost feel weird posting it without some kind of warning. I realise that a warning would just be ridiculous; this is a site for grown-ups, featuring various unpleasant elements dealt with in an often frivolous manner. But, fuck it, I’m not going to be frivolous about the picture. I want to talk about it.
I find it a rather strange thing to look at. I found the picture again on Monday 16th April 2012. Prior to that date, I hadn’t seen it since (by my rough calculations) around April 1980, when I would have been six years old.
The picture massively upset me as a child. I can’t help wondering how long I must have looked at it for after opening the comic, puzzling over it, trying to work out what I was looking at. I was certain, before this Monday, that my memory must be exaggerating or playing tricks because it just didn’t seem to make sense. Why would such a panel be in a Spider-Man comic? It didn’t fit the universe. I Googled every different thing I could think of that might lead me to the answer. I Googled ‘Murder Magic’ (which is how I remembered the title; my six year-old self clearly missed the ‘by’), I searched for info on the 1980 pocketbooks (and could only find that they held reprints of classic Ditko Spidey), and pulled up nothing.
Then, last week, I found a copy of Spider-Man Pocketbook issue 2 on Ebay. I thought there was only about a 30% chance that it would be the right issue (I remembered the magician image clearly, the cover of the hastily-binned comic was vaguer) but thought it was worth a few quid to find out. I was laid up in bed sick the day the comic turned up, and thus the fact I was vaguely feverish when confronted with the image again after 30+ years may well have added to the impact.
But, there it was.
It’s a reprint of a Marvel Boy story from ‘Astonishing’ comic circa 1951, and was thus almost 30 years old by the time it comprehensively ruined my day in 1980. The fucking thing is *exactly* as I remember it, and still seems incongruous to my eyes in the middle of a very child-friendly Spider-Man comic.
Of course, finding out that it was a Marvel Boy story made it a lot more Google-able, hence the fact that I was actually able to find an interactive preview of the original issue of 'Astonishing' which you can peruse over here (and it's that version that I grabbed the image at the bottom from). The version in the pocketbook is black & white. I don’t think the colour makes it any more reassuring.
Most things that scare you as a child become cuddly to you as an adult. I feared the poster for Scanners as a kid; by the time I was at Uni I prided myself on having an original UK quad on my wall. I can’t see myself clutching this one to my chest in the same way.
Truth be told, it still creeps me out, and it also makes me feel angry and slightly sad. I can trace the threads of Murder by Magic in various creative stuff I've done over the years, so I guess it's given me something back for that ruined afternoon in 1980.
These things that upset us get carried with us, though, and ultimately become part of us whether we want them to or not.
Here's the image, folks. 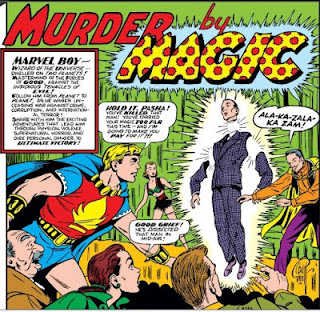