There is a moment in Slash where a man leaps up from a nightmare and shouts “Barbara!”. This may not seem worthy of any real attention for most of you, but for the group of newly formed friends gathered for their first 'bad movie' night it became a moment that resonated with us deeply. There was nothing especially remarkable about that moment. Maybe it was the delivery, or perhaps the actors luxurious moustache... something about it just made us laugh. 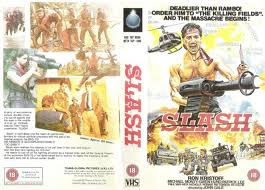 And that is Slash all over. It's hardly up there with the classic 'so-bad-it's-good' movies, in fact to many it would seem boring and utterly forgettable. Yet it was inept enough in a particular way to make the film easy pickings for the vultures that had gathered that night to watch it, and the purpose of this article is to characterise that particular way to the best of my ability.

Slash opens with the word 'Vietnam' crash zooming towards the audience while behind it a battle rages between American soldiers and guerillas. This would have been an incredibly effective opening had it been set in deep rain-soaked jungle. However this particular battle takes place in the driveway of a country house, on what looks to be quite a pleasant afternoon, while around the soldiers lay bed frames and an overturned jeep. Not quite Apocalypse Now. 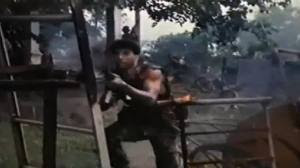 Of course in low budget film-making you have to make the most of what you've got. It's not like they had the money to fly to a country that would easily double for Vietnam. Did I mention they shot this in the Philippines?

This opening sequence also features one of the most harrowing depictions of death I think I've ever seen. A soldier is shot and reacts by stopping dead in his tracks, spinning round one hundred and eighty degrees on the spot and then sitting down. Now maybe I'm being unfair, maybe destroyed beds would often litter the battlefields of 'Nam. Perhaps the effect of being hit by a bullet fired from an M16 assault rifle would have been to spin round before retiring to a seated position. If 'm honest I'm basing my knowledge of Vietnam entirely on what I've seen in other films. I have to, I wasn't there man!

It's about this time in the film a character tells us Vietnam “ain't no fucking bus” and is in fact “a country with real live people”.

Aside from pearls such as that, the film depicts the Vietnam war as a series of indistinguishable soldiers running around fields and falling over. As with the spectacular opening battle, the problem with action scenes in Slash is not scale. Throughout the film we are treated to armies running across battlefields, tanks, bridges exploding, helicopters, you name it. Yet every single sequence is captured in wide shots, making it feel like we are watching a battle re-enactment group rather than being in the midst of an exciting struggle. The deaths do not improve either, the stuntmen apparently being instructed to either casually lay down or leap into the air with all extremities outstretched (regardless of how close or far away the explosion was to them). To make matters worse they don't intercut the wide shots in an attempt to create any kind of pace, deciding instead to paste the shots back to back to try and sell the audience the idea that they had more than four explosions going off. It becomes something of a chore watching the same three stuntmen pathetically flail about in response to the same explosion time after time.

It's about this time in the film the heavily moustached “Barbara” shouting Major Scott's leg grows back. 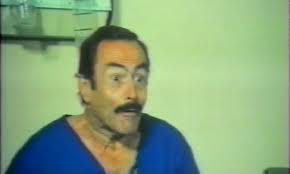 Major Scott does not have a good time in this movie. A failed evacuation from a besieged city ends up with his wife, the aforementioned Barbara, in the hands of rebels and himself down a leg. However, later on in the film he has both legs back. When we first watched the film it appeared to everyone that his leg had grown back.

When I watched the film again in preparation for writing this article, I discovered that this was the not case. What we had all missed was a single, dialogue-less shot, where Scott points to his knew rubbery artificial leg. I think we can be forgiven for that mistake as it's not like they laboured the point and once the leg is on Scott doesn't so much as limp. Does this revelation exonerate Slash?

A leg growing back was the kind of major flaw one would expect from a proper bad movie. Although confused at the time, I had since decided there must have been a rational explanation, such as a scene having been cut somewhere along the way. However, now that I am aware they intended the leg to come back and that this was the best they could come up with only cements the film-makers particular brand of ineptitude. In fact I'm beginning to suspect they forgot the character had lost a leg and where forced to come up with that tenuous explanation on the fly.

I have also found on second viewing a number of other moments that are only partially inept, but inept enough to rob said moment of any effectiveness. Here are my three favourite:

It's about this time in the film that Barbara spits in the villain's face causing him to make a sound like a recording of a motorbike engine revving played at double speed.

Interrogation scenes are an ideal way of demonstrating your protagonists devotion to his values as well as his durability. The film seizes this opportunity, yet again gets it wrong. Slash (our hero who is helping Scott rescue his beloved Barbara) has already agreed to give our villain the location of the McGuffin (in this instance a suitcase) in order to stop Major Scott from being repeatedly shot (c'mon, give Scott a break). Alas the the story calls for a little water to be tread in order to allow an escape plan to be put into place. Thus, the screen-writers come up with a solution to drag the scene out a little longer.

Just ask him you twot.

It's about this time in the film that slash has a conversation with someone for nearly thirty seconds before realising the guy is clearly dead.

Poor Scott, his wife is kidnapped, he loses a leg, he is repeatedly shot and then when he finally dies his “friend” shouts at him for being dead. What is important about that clip, however, is how it highlights actor Ron Kristoff's craft.

I'm not familiar with Kristoff's other films (many of which were of a similar theme) but one can only hope he got to display this range of emotion in them. My favourite moment of his, though, is his reaction to discovering his escape route has been compromised.

Put your actor's hat on for a moment.

You've just rescued a POW and are racing through the jungle to get back to your helicopter only to discover it is no longer there. As an actor consider your choices of how you should play this moment. Do you simmer with rage, desperate to scream out but repressing the urge so as not to give away your position? Do you collapse in acceptance, perhaps with a wry smile as you acknowledge that all along you knew this was a suicide mission? Do you break down and sob like Stallone at the end of First Blood?

No doubt all of these choices went through Kristoff's mind prior to the cameras rolling, but in the end he went with this:

Watched alone one might not make it a half hour into Slash. I'll admit on second viewing I found myself eyeing the fast forward button on several occasions. Yet with a group of friends all looking hard enough there is plenty to enjoy. It's not that the film is cheap, on the contrary it is full of production value, yet every decision on how to capture that value was made by someone who didn't know what the balls they were doing. It was this constant evidence of poor decision making that kept us going, even through the dry spells. It was a film that but because of, not in spite of, it's mild yet frequent ineptitude that allowed us to bond in mutual mockery.

For some time after that evening shouting “Barbara!” at a friend roused a fond memory and raised a sly smile. That is the power of cinema; even a forgettable Rambo rip-off made in the Philippines can bring people together.

Of course I don't expect you all to understand, but that's because you weren't there, man. 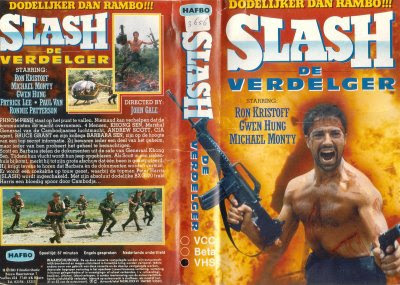