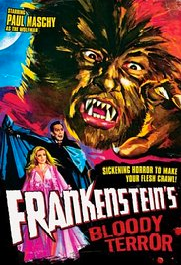 I think I have made my love for Paul Naschy clear (here and here) and since I believe enough time has passed since I last wrote about the Spanish horror master I'm going to spend some time on his first turn as the werewolf Waldemar Daninsky in the cracking Frankenstein's Bloody Terror.

I think it's a good idea to get the fact that Frankenstein does not appear in this film out of the way early. Originally produced as werewolf movie Mark of the Werewolf American distributers bought it at a time when they needed a Frankenstein movie to fill out a double-bill or two.

As such a short voice over, accompanied by a barely animated monster, tells us that at some point the Frankenstein family became infected with werewolf blood to become Wolfstein. At this point I'd like to recognise how helpful it was of the Frankenstein family to announce their lycanthropy via Deed Pole. With that out of the way the movie proceeds pretty much as originally intended.

Two childhood friends have grown up and fallen in love with each other. As the children of two respected aristocrats their lives seem destined for wealth and happiness, at least they would be if swarthy cad Daninsky wasn't a distraction. Not only is he financially compromised his family name is riddled with infamy predominantly due to a story about his father receiving a werewolf bite on an expedition and going on a murderous rampage. The story turns out to be true and Daninsky himself is bitten and transforms into a savage wolfman. In a desperate attempt to cure himself he brings in a Doctor and his assistant who turn out to be vampires and who pit Daninsky against his Father in a werewolf on werewolf smack down. The fucking luck of this guy, jeez.

Bloody Terror is bloody marvellous. Like all of Naschy's gothic creature features they are sumptuous productions giving Hammer a run for their money. Nasty reproductions give these movies a cheap feel but this movie was shot in 70mm and it's initial cinema run, in 3D no less, was meant to be something to behold. Despite a weak transfer you can still see why. The use of depth and colour in this movie is staggering at times looking like Argento had directed a Universal Monsters picture. The locations are a mix of authentic gothic ruins and dungeon sets and are all wonderfully evocative.

As the first of Naschy's werewolf flicks out the gate it isn't quite as gory as his later efforts (although a fair bit of crimson is dribbled out his fanged mouth) and sex and nudity is non-existent. There is a lot of cleavage on display but compared to the movies he was making in the mid-to-late seventies (which were in danger of becoming nudey flicks dressed as horrors) Bloody Terror is positively chaste.

It is also clear from this movie why Naschy got to make so many more. From the first frame he appears in, dressed in a bright red masquerade outfit, to being chained against a wall he commands the screen. Daninsky is an interesting character; driven by a moral compass of sorts yet very much a womaniser. He's like the James Bond of the monster world.

Bloody Terror also doesn't bugger about with one monster, instead chucking in Vampires and another Werewolf for Daninsky to bash. With lavish sets, monster-on-monster action and a star-making turn Frankenstein's Bloody Terror is a must see for anyone who loves classic monsters and gothic horror. 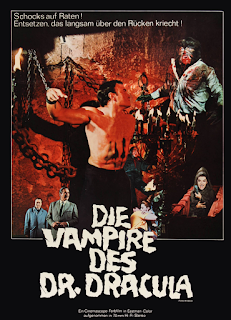