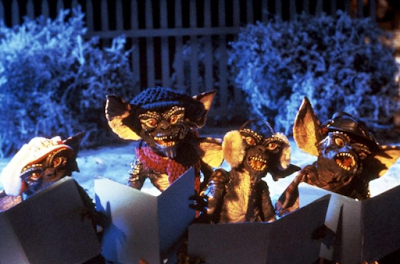 Much has been written about the dangers of too much nostalgia in one's cinematic diet. In recent years we have had endless remakes and reboots that, even when good, try to cack-handidly wedge groan inducing call-backs to previous movies. Even original content, such as Stranger Things, thrived on conjuring warm thoughts of distant childhoods.

I have an odd relationship with nostalgia in that I genuinely still like a lot of things I liked as a kid. I don't want to grow out of my childhood; I want to add to it. As such it is sometimes difficult to separate nostalgia from genuine appreciation.

Thankfully no one has to worry about his shit at Christmas. Once you get past all the Christian symbols and rituals Christmas is, for people that have had good ones, often an attempt to recapture the past by rolling out a number of traditions (like bread sauce, chocolate coins and painstakingly circling every movie and TV show in the Radio Times only to not bother watching or recording any of them). Christmas is as much a celebration of nostalgia as it is the birth of J-Chris.

It is also this time of year when people start going on about the Christmas movies they are going to watch (namely Home Alone and Elf) while often dismissing your movies as not traditional. And you will always get one rebellious bugger who'll say their favourite is Die Hard before filling with a warm trickle of smugness like a pissed-in trouser leg. Full disclosure, that's normally me.

Thing is my Christmas movies aren't Christmas movies at all and I am often met with weird looks when I try to explain them to norms. With the exception of Scrooged and maybe Elf no movies about Christmas tend to get me in the festive mood. Why? Because they weren't the movies I watched at Christmas. My Christmas viewing is, therefore, based around the recapturing of formative moments in my X-Mas life: a flicks of Christmas past if you will. As such I have compiled an alternative playlist of movies that invokes the spirit of Christmas without ever really touching on it. 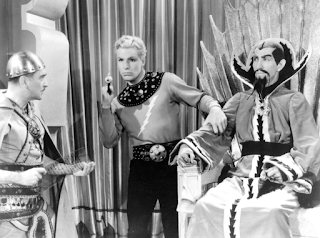 Like most kids my normal mornings would be filled with children's TV presenters, puppets and animations based on toys. So when Christmas hit those kinds of things didn't really stand out. Then one year my Dad woke me with the information that Flash Gordon was on TV. I didn't really have a grasp of ratings but even I thought Flash Gordon was a bit much for 8:30 in the morning. I stumbled into the front room to discover a black and white Flash Gordon adventure featuring fizzing rocket ships, calamity filled action scenes and a frantic orchestral score. It looked cheap and the image was fuzzy but there was something about it that hooked me right away. And then the cliffhangers... holy shit they worked wonders on me. I had to tune in the next day to find out how Flash survived that fall into a pit or that clearly fatal rocket crash. And so every morning for the week leading up to Christmas I ran to the front room to check out the next episode of this thrilling cliffhanger serial. The next year was Buck Rogers. Then Batman! A version of Batman I didn't even know existed! A really racist one, granted, but a version fresh to my eyes. The following year I hurriedly flicked through the Christmas Radio Times to see what hero was going to greet me in the mornings this year only to be crushingly disappointed by a total absence of cliffhanger serials. And so, if I were to programme my perfect schedule of Christmas viewing I'd begin with a couple of episodes from some of my favourite serials such as the later episodes of The Phantom, the first few of Captain America or any Spy Smasher.

Christmas has always been synonymous with fantasy and Science Fiction for me. Something about Christmas fires my imagination, filling it with images of vast deserts, brave warriors and alien races. Only a few years ago I sat and watched John Carter while eating leftover Pate and toast and was thrilled about how much it reminded me both Star Wars and Flash Gordon. Some odd narrative choices aside (and the fact it was clearly setting up a sequel that never happened) the movie is an absolute joy. It's design is thrilling, action stunning and has a score that you feel more than hear. As such it has become a regular Christmas movie for me and one I'd happily sit and watch while the house fills with the smell of roasting bird and a pile of freshly opened presents beg to be played with.

One of my happiest and most vivid Christmas memories was sitting in my Aunt's front room after Christmas dinner, the room lit only by coloured Christmas lights, while I played with my Action Force Snowcat and Quick-Kick figure and Short-Round leapt to safety from a tumbling ladder on the TV. Temple of Doom is, for me, a quintessential Christmas movie full of the fun, colour and swashbuckling adventure that thrilled me as much as waking up that morning. It was the live action equivalent of the games I played with my newly received toys and demonstrated abstract imagination, music and image working in perfect synchronisation - as if my dreams had literally come true.

One year the food had been eaten early and some leftovers, plus snacks, were being arranged into an impromptu buffet to see us through endless games of Pictionary and into the night. I'd popped upstairs to my room and had happened upon Star Trek: The Motion Picture. This is a film I'd been wary of as a small child as although I loved Trek some of the imagery had seemed a little to slow and weird for my tastes. I was about 15 at this stage and was fostering a real interest in movies and soundtracks so I thought I'd give it another whirl while I waited to be called down for food and games. I was confronted by the depths of space and, rather than a soaring white craft and hopeful strings, three dark Klingon warships slowly approached accompanied by Jerry Goldsmiths's driving yet ominous score. Then they were destroyed by a mysterious force. That musical cue; Klingon Battle, rattled in my head for years after. The juxtaposition of traditional orchestral score mixed with jarring electronic interruptions made space feel unsafe, tainted even. It was weirdly appropriate for someone just going through his teens and who was to go downstairs, not as the annoying kid who will never run out of energy, but to join the adult's table and play games into the night. The movie is slow and long but is one that mixes the vistas and adventure of earlier choices with a strange foreboding. it's a film that really plugs me into a specific moment one Christmas. Dune and Lifeforce are also entirely acceptable at this point in the day. 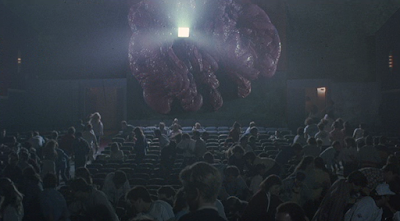 I remember one Christmas deciding I'd leave the festivities downstairs and go up to bed. Only I didn't. I'd clocked that the Blob (the remake) was on TV and thought I'd stay up late and watch it. It was glorious: weird and gory yet enormous fun. Oddly I also associate Hammer Horror with Christmas. I think the sumptuous Victorian sets are reminiscent of A Christmas Carol only with a little more bite (no pun intended). In particular I'd go with their version of Phantom of the Opera or maybe even Plague of Zombies. Either way something schlocky or classical always fits the bill at Christmas.

Of course there are other movies that mix adventure and scares with more traditional Christmas iconography. Gremlins, for example, is a much more subversive and rebellious choice than Die Hard while I always find for room Batman Returns, a movie that is by no means a great Batman movie but quite possibly one of the best Batman adaptations.

So what is the point of all this? Why would the nostalgic ramblings of a seemingly spoilt* brat be of any interest to you? Well, this is not about recounting Christmas stories but more about redefining what a Christmas movie is. It's not about snow, or whether a film is set at Christmas or whether there is a musical number. It's about what memories of Christmas they coax out of your mind. So next time someone tells you your particular picks aren't' "proper" Christmas movies maybe this argument will help you fight your corner.


* I was neither spoilt nor lucky - my parents worked hard to provide Christmases for me and my family that were well beyond their means. Now, as a parent myself, I literally have no idea how they managed to do it.