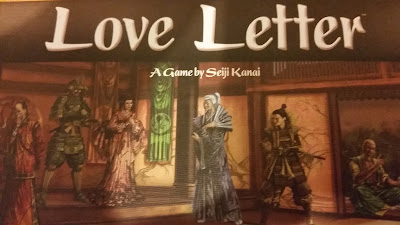 Pass a secret letter between those that live and work in the Palace in an attempt to get it as close to the Princess as possible! A simple yet thrilling game of bluff and chance. 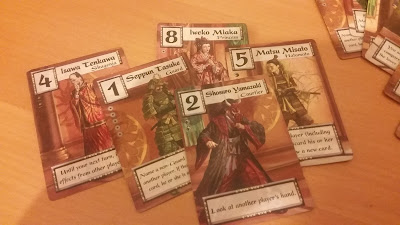 The deck is formed of eight characters each with a value from one to eight and there are specific numbers of each character in the deck (five guards, two diplomats, etc). Each player is dealt one card and the rest placed in the centre face down. On a player's turn they pick a card, then play one face up. This not only shows the team which of the characters are no longer in play but allows the player to use the character's ability. These abilities can allow you to peek at another player's hand, force a player to discard and re-draw cards or even compare hands with another player with the player holding the lowest rated card being knocked out of the round. Play continues with each player trying to work out where the highest rated card has ended up. Once the deck is empty the round ends and those left playing compare their hands, the person with the highest rated card wins. 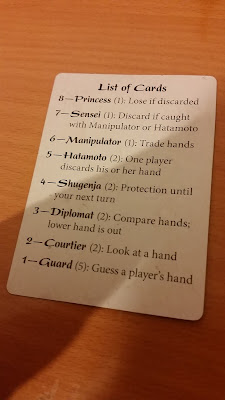 Love Letter uses much of the same strategies as poker. It not only requires you to keep an eye on which cards are no longer in play but also bluffing others to play effects that will benefit you. Since the primary game mechanic of "pick one play one" is so simple this game is all about what is happening above the table. 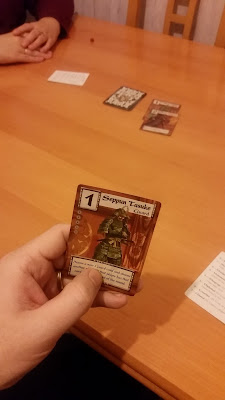 The deck is relatively small but the cards robust and the artwork beautiful. The cards come in a cloth bag and the wooden cubes, used to denote who has one a round, are simple but effective. A handy reference card that lists all of the characters, their ratings, the number of them in the deck and their abilities helps play move even quicker. It is a minimal game, and intentionally so, but what you get is well put together. Multiple different versions are available including licensed versions such as Batman and The Hobbit. 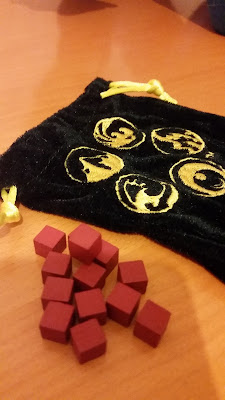 I play this most often with a less experienced gamer, a teenager and a nine-year old giving you some indication of its accessibility. It's like poker for beginners but with enough strategic complexity to engage regular gamers. It really is a great introductory game. 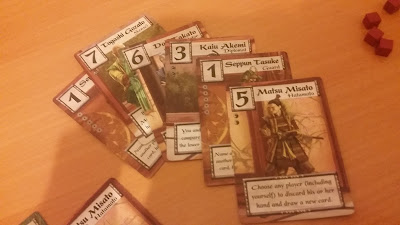 
Love Letter is a great game and at only £10 it's a great addition to a collection even if the most complex games you play are Uno and Monopoly.