New high-tech goggles pick up ghostly images on the battlefield and their inventor is dispatched to ascertain whether these ethereal assailants are a new kind of camouflage or something more supernatural.

So much of this made for/by Netflix movie works. Although clearly not a mega-budget movie it looks incredible and the visual effects are faultless. The action is well handled, the story is pretty fresh. It essentially riffs on the soldier versus monsters action formula made popular by Aliens but this particular combination of army and ghosts hasn't been tried before without heavily leaning on the horror. There is a texture to the movie that makes it feel like a tangible world despite some heavy CGI while the scale of the whole thing is tremendous.

Although it tries to ground the whole affair in reality it isn't afraid to exercise a little imagination. The factory setting in the finale looks like it was drawn by Katsuhiro Otomo, the ghosts are interesting when moving and a wonderfully silly A-Team moment leads to a bunch of super weapons including robot dogs. If fact so much of this movie is great am actually trying to pinpoint why it didn't blow my socks off. 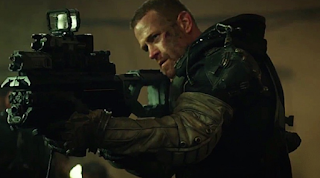 Part of the problem, for me, was the lack of interesting characters. I'm not looking for anything too deep in a robot dogs against war ghosts flick but the military team we spend the majority of the movie with are all the same kind of person. Every single one of them is tough, gruff and no-nonsense. Even the science guy is a gravelly voiced blue-steeler. There is no paranoia, no mania, no quips or no overly macho posturing. No Plisskens, no Blaines, no Hudsons - just the same squint and rasp performance. So much so I can't think of a single defining trait between any of them, nor any character names.

The ghosts are also a mixed bag. In motion these things are a sight to behold. They leap and twist leaving a smokey blur trail that creates some beautiful imagery. When stationary, however, they look like a CGI ghost and as such never quiet feel like a real physical threat. They are also pretty boring and samey. The film does explain what they are and why they all look the same but Christ this movie would have been so much more fun if there had been a variety of ghosts. I'm not necessarily suggesting they go as far as The Frighteners but a happy medium would have made for a much more interesting set of fiends. A punchier score and a little bit of gore would have also helped.

So despite all the interesting visuals it fell a little flat for me. And yet this movie has me very excited. In the 90s there was a steady stream of mid-budgeted straight-to-home genre movies that matched bonkers ideas with half decent production values. In more recent years these kinds of movies have either need a real star to get made with any money behind them (Edge of Tomorrow springs to mind) or end up being made with super-cheapo CGI a la The Asylum. This is the first time in a long time I've been drawn in by a high concept and seen it driven by a budget big enough to do the story justice while not having to neuter the ideas to appeal to a mass audience. The positive buzz around this flick makes me hopeful that modest yet crazy genre movies like this might start getting made again.

So although it didn't quite do it for me there is plenty going on to please most genre fans and rather than it being a missed opportunity this feels like it might be the start of something wonderful.
Labels: Reviews