Master of Spanish gothic horror Paul Naschy is famed for his regular appearances as werewolf Waldemar Daninsky, yet despite a werewolfography as long as the thick rope of bloody drool dangling from his perpetually gnashing maw Naschy also appeared in a number of other roles. The films I have chosen this time reflect a more diverse approach to genre filmmaking and are my preferred non-lupin entries into his body of work. 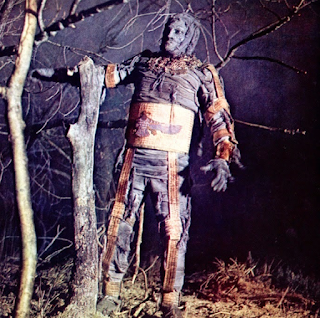 Naschy’s turn as the Egyptian undead ditches the sleazier elements of Euro-horror and commits to gorgeous sets, opulent costumes and generous gore. Playing both the Mummy and a descendent driven to resurrect it Naschy seems to have tremendous fun stalking the streets of Victorian London looking for sacrificial victims.

This is one of the most beautifully produced horrors Naschy has made. The sets, from gold laden sacrificial temples to dank but evocative sewers, display a spectrum of rich textures. This mix is also present in the Mummy costume: a composite of filthy rags and shimmering gold jewellery. These juxtaposed materials help create a rich and tactile movie that tickles all the right nerve endings. 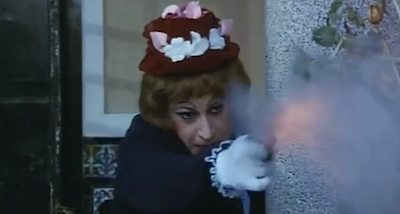 Leaving horror altogether Naschy, billed under his real name, directs himself in a crime-thriller that oozes Dirty Harry and ItalianEuro-crime. Having watched this in its original language (a language I am unable to speak) I’m not a 100% clear on the story, but it appears that Naschy is a hitman with a penchant for disguise and whose Father may have been a Nazi war criminal.

This is something of a vanity project with Naschy getting to act tough and frolic with a number of partially dressed women. Or not dressed at all. Yeah, this movie is dripping with sleaze. The flashbacks to the Nazi camps allow for some dalliance in Nazi-sploitation shenanigans while even something as simple as a pool party features be-speedoed muscle men flexing and women running around with nothing on.

What struck me more than the sex were the film's influences, most notably some direct lifts from Magnum Force. The opening credits sees a revolver being loaded and fired against a red backdrop while the pool party descends into a machine-gun bloodbath.

And just because this is an action thriller rather than a horror doesn’t mean Naschy skimps on the red. Grenades take off limbs, bullets rip through flesh and the camera lingers on the aftermath of whatever carnage has taken place so that we really get to soak in whatever fleshy wreckage has been left.

“Nazi-sploitation”, “sleaze” and “fleshy wreckage” doesn’t make this film sound a lot of fun and yet Naschy does manage to present all of this with a sense of the absurd. Naschy’s disguises make Clouseau look like the T-1000. It is really difficult to be upset by a movie that features Naschy dressed as the shittest women ever lobbing grenades at a Sheik. 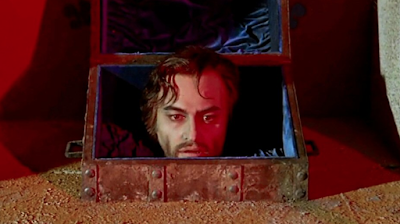 When not indulging his lycanthropic proclivities Naschy tends to dabble in medieval witchcraft. Horror Rises from the Tomb is a nice example of film that has a little of that but also manages to throw in some contemporary stuff as well. Naschy plays a master of the black arts who, along with his female accomplice, is beheaded for his dalliances with Lucifer. Fast-forward to modern times and a séance brings back the lopped bonce and unleashes all manner of ghastly goings on. This is a proper kitchen sink movie with murders, car chases, zombies, a kick-ass executioner, sex, a talking severed head and all sorts. It doesn’t quite have the integrity of The Mummy’s Revenge or the shamelessness of Kamikaze, but it’s a fun horror flick that ticks a lot of boxes.

I go on about Paul Naschy a lot on this site but his huge filmography keeps throwing up genre gems. If you’re a genre fanatic there really is loads of fun to be had with Naschy, even if werewolves aren’t you thing.
Labels: Triple-Bills