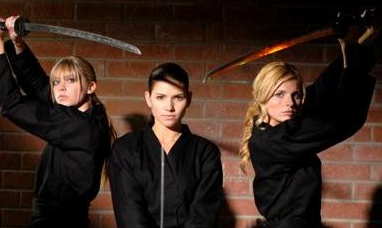 George Takei trains three 18 year-old college girls to be ninjas. He also runs a strip joint where these girls regularly strip to their undies to fund their continued education. I'm not sure I like George Takei's character in this movie.
Anyway, despite being an ethically questionable and exploitative opportunist we, the audience, are apparently meant to care when he is kidnapped by the mob for some reason or another. The girls give up their dreams to better themselves instead choosing to track down their mentor/pimp.
This movie comes in at under 90 minutes but outstays its welcome after about fifteen. Shot dirt-cheap and with no identifiable visual style aside from an overuse of Cube Spin transitions this movie has very few ninjas, very little ninja action and absolutely nothing else to offer except Michael Pare and competent sub-season one Buffy martial arts sequences. In short, imagine the trailer below lasted 80 minutes and you've pretty much established the experience you would be in for.
It appears that my grading system has at last got it right: this is a poor movie that also fails to satisfy in its ninja content. One small note; my attention began waning about twenty minutes into the film and as such the statistics below are the product of the minimal concentration required to claim I've seen this movie and, as such, may not be 100% accurate.

Ninja Kit – Katana (two of which seem to generate electricity and/or magical energy).

Notable Ninja Kills – Zero (Takei pinches a woman into unconsciousness, but it is unclear whether she is dead or not).