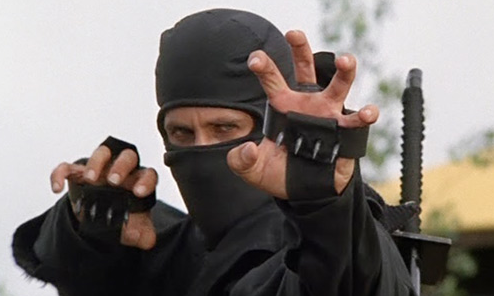 The Ninja is the most feared assassin of all. Melting out of the shadows and striking with balance and efficiency these phantoms appear otherworldly and omnipresent. Their grace and lethality are mirrored in their weapons; an exquisitely forged armoury of bladed murder tools that cut silently through air before slicing wetly into flesh. Draped in ominous black and lurking in the corner of your eye, they can attack at any moment. There might be one in the room with you right now. So ever-present and stealthy are they it is rumoured you swallow several of them in your sleep every night. Actually that might be spiders. Yeah that's spiders.

As a kid Ninjas both excited and terrified me. I would often see Ninjas adorning the covers of exciting looking video covers dressed in their awesome outfits and pulling the coolest poses my tiny eyes had ever seen outside of a comic. Unfortunately for me they were almost always accompanied by a round red sticker identifying the movie as being for people of eighteen years or older. The thought of the horrors these black-clad baddies might perpetrate made my wimpy ten-tear-old self anxious but intensified their mystique. Therefore as much as the mental images of decapitations, broken limbs and heart removal that the covers evoked repelled me the weird allure of the Ninja baited me into mentally storing those covers ready to return to them at an age when I could handle the bloodshed.

I am now of age and I am now ready to discover what those nightmarish shadow-dwellers could do that would earn them that little red sticker.

Turns out I had mostly nothing to worry about. Most of these movies were rated eighteen because the BBFC didn’t like the look of the weapons they held irrespective of whether they used them or not. Despite their tameness I have not been deterred from delving into as many as I possibly can, recording what I find. This information will take the form of a short synopsis and the following statistics:

Ninja Abilities – It is assumed all Ninjas have the ability to move stealthily, perform martial arts and have some acrobatic skills. Some movies, however, show that Ninjas can develop an incredibly diverse skill-set over time. So any unexpected, unusual or downright supernatural abilities will be noted.

Ninja Kit – Bladed weapons are the meat and potatoes of the Ninja trade, yet many also use specialist equipment to carry out their tasks. So if you want to assemble your own comprehensive Ninja arsenal, take note of this section.

Ninja Colours – Ninjas come in all colours and sizes, this section will list the different outfits that appear in the associated movie.

Notable Ninja Kills – Stabbing and slicing is expected but this section is reserved for any particularly interesting kills, whether it be creative, gory or overly used.

Ninja Activity – Don’t tell me someone is a Ninja unless they’re in costume. This section judges how much full-costumed Ninja action is in the movie.

Ninja Mythology – I’m going to assume that all movies featuring a Ninja are canonical (I think it’s safe to assume that Three Ninjas Knuckle Up is in the same series of movies as You Only Live Twice right?) and as such each movie will add something new to the Ninja mythology.

Overall rating: Nothing to do with the quality of the movie (some lousy movies will get high ratings, some good will get low) but rather a judgement on the overall quality of Ninja action. Are there enough Ninjas? Are they awesome? Are they deadly? Did they earn that red sticker? That kind of thing.

When my work is complete we might be able to pit these movies in a battle to the death to determine which is the ultimate Ninja movie.
Labels: Ninjas Ninjas Ninjas!