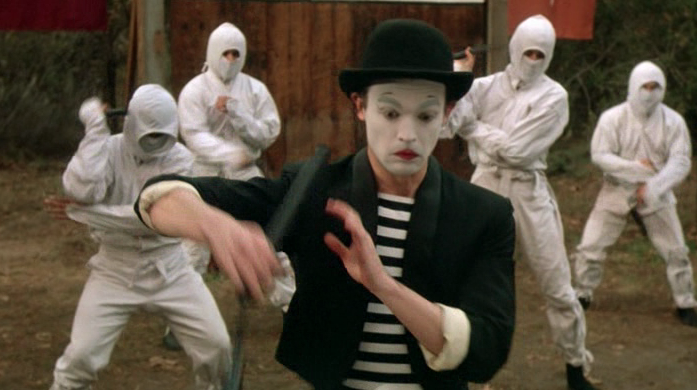 Ninjas may have been big in the 80’s, but hilarious academy-based movies were even bigger and it was only a matter of time before a genius put those two ideas together. A bunch of loveable losers enrol in a Los Angles based Ninja Academy and all sorts of hijinks ensue. Unfortunately, jokes do not.

The movie relies on the audience buying into two conceits. Firstly, that Beverly Hills has not one but two Ninja training facilities that are open to the public, and secondly that the collection of dicks enrolled could be considered relatable, loveable or engaging. The selection of bums and dropouts range from the clichéd, (the spoilt rich kid, the clumsy nerd, the Tackleberry-esque survival nut) to the utterly absurd (the mime, the lame Bond rip-off name agent 00711) and all fail to raise laughs or emit charm.

A thin contrivance regarding a rival school leads to a surprisingly brutal climatic fight, but it’s not as brutal as the total lack of laughs.

Ninja Mythology: Ninja training consists of running through the woods, shouting at your enemy and pretty much fuck all else.

Wondering what the hell you just read? Check out the introduction that explains everything you need to know about this column here!