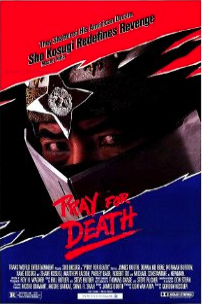 Sho Kosugi’s family falls foul of criminals, so he digs out his old (but badass) ninja outfit and goes to town on the bastards. Despite some ill-deployed eighties power ballads the movie manages to stay badass throughout. The movie has a nice opening ninja fight, Kosugi playing chicken with a pick-up truck, children fighting and a kinetic and brutal final battle that involves chainsaws, rotary blades and mannequins. If Kosugi wore his awesome outfit throughout, or if there were more ninjas in the movie it might be the perfect ninja movie.

Ninja Mythology: Some ninja’s just want to be left alone to get on with their lives.


Wondering what the hell you just read? Check out the introduction that explains everything you need to know about this column here!