The conservative crime and action movies of the 70's and 80's would often see the lives of everyday (white, middle class) americans being intruded upon by some outside force be that a gang, a terrorist, a psychopath, or some other undesirable element. The invasion of this alien element would require violence and right wing ideologies to return the world to the status quo. As the 80s ended these marginalised groups, and their capacity to buy cinema tickets, were being recognised as legitimate subcultures by hollywood in addition to mainstream audiences becoming more interested in their unfamiliar ways. As cultures began to diversify action movies broadened their subject matter and rather than treat these new cultures as an alien interruption they sought to immerse the protagonists, and audience, in their worlds.

One of the worlds that mid-budget action movies seemed to become obsessed with is that of the Yakuza. Clearly obsessed with the strict codes of honour, martial arts intrigue, exotic full body tattoos and the excuse to have those naked women having sushi eaten off them there was an explosion of movies featuring the clash between good old American crime stories and the mysterious rituals and textures of the East. Movies such as American Yakuza and Rising Sun (both 1993) and Blue Tiger (1994) revelled in exploring these fascinating new cultures. 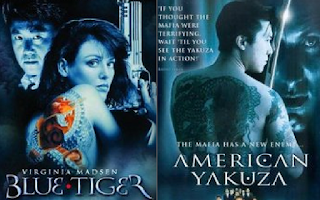 Of course that was part of the problem. Although this was indeed an attempt to engage with cultural shifts beyond "weird ethnic thug" these movies treated these new worlds as if they were mythological realms found in a Tolkien book. The main reason is that ultimately these films presented a white guy's interpretation of these other cultures and as such everyone not white and American were treated as strange, mystical and "the other'.

What is most interesting about revisiting some of these movies is what we actually learn about the American characters, especially when looking at the fusion of Yakuza thriller and buddy cop movie. Part of this cultural broadening often saw the conservative cop partnered with someone from the same cultural origin as the bad guys but what was particularly noticeable about the cops in some of the Yakuza movies I watched is that they were all fucking awful at their job. Either flat out incompetent or criminally negligible.

That's not to say that any action movie featuring cops presents an ethically idealised image of how policing should be (check out an earlier article on this) but all three of the movies I watched prior to writing this featured such shockingly bad policework I became enthralled by their negligence; way more than the crazy devotion it takes to lop a pinky off by way of apology.

Take Black Rain (Ridley Scott, 1989): We are introduced to Nick Conklin, or Michael Douglas dressed in his best 80's cop halloween outfit (or it might be Faith era George Michael, I can't quite tell) as he is under investigation by internal affairs for his involvement with another cop who might be on the take. In addition we are shown up front that he likes to illegally street race for money. He hates his superiors, despises the very nerve of I.A. investigating crooked cops and generally acts like a massively petulant bellend. It's like someone has stuck a wig, aviators and fake stubble on a two-year old in the middle of gargantuan strop. 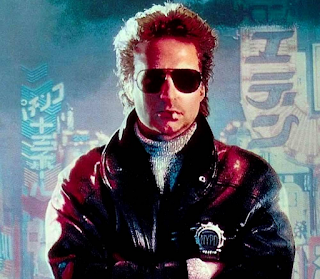 Conklin witnesses a Yakuza execution and is sent to Japan to retrieve the fleeing perp. His character goes through the checklist of trying out Japanese food, telling them about American sayings, getting pissy with the Japanese Police for not letting him run the streets with a gun and being partnered with a Japanese Detective who, despite clearly being a good cop, he berates for getting in his way for most of the film. While in Japan the only bit of real policing he does is that he steals money from a crime scene because he reckons it is counterfeit. Despite this clearly being against regulations and getting his new partner proper in the shit his hunch turns out to be right and so the Japanese police have to re-think their entire methodology. Of course they do.

Oh, and it turns out not only was Conklin's partner on the take, so was he. He was skimming money out of the evidence locker to pay for his divorce because he is clearly a shitty husband as well as a shitty cop.

His final act of bringing ruination to the good Japanese cop's career is to convince him to tool up and join him on a mega off-the-books assassination of the Yakuza boss he's been trying to track. Conklin is corrupt, arrogant and only succeeds at his job though breaking the rules and relying on sheer bloody luck.

Nearly ten years later American Dragons (Ralph Hemecker, 1998) pulls a switcheroo. This time it is Korean cop Kim, played by Jooong-Hoon Park, who travels to the US to be teamed up with Michael Biehn's Tony Luca to track down a Yakuza hitman. They begin by investigating the CEO of a respectable Japanese company only for Kim to start wailing on one of his assistants. He literally starts a brawl in this guy's office, complete with hard rock soundtrack. This happens quite a lot and the two even have a They Live style punch-up in an alley because they won't share information with each other. Luca, by comparison, is actually a pretty good cop who seems to play by the rules (mostly) and who seems to get on with the other cops, even his captain. 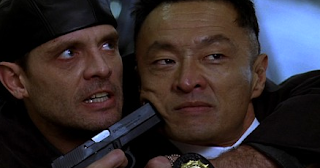 Both American Dragons and Black Rain share similar stylistic problems. Despite Black Rain being of a higher pedigree it is still a run of the mill police action movie. Scott's visual edge means the film looks gorgeous and has all the grit and texture of a French Connection-style procedural. The subject matter, though, is more fitting for your average Stallone blast 'em up and this means it is never serious enough to feel like a real cop drama and a couple of exciting motorcycle chases aside it is never exciting enough to be a full-on action film. Likewise American Dragons' arty lighting and slow-motion make it look far more evocative than most straight to video cop movies and although the action fares better (slow motion and squibby shoot-outs are rarely boring to watch) it plods along when it should rocket through its running time. It does, however, kill its bad guys in a really awesome way. It would be my favourite moment of all these movies if it hadn't been almost immediately trumped by...

Showdown in Little Tokyo (Mark L. Lester, 1991) has the same Director, heart and wanton disregard for integrity as action masterpiece Commando. It has, by the looks of things, only a fraction of the budget. What it lacks in overblown absurdity it more than makes up for with terrible policework.
The nice twist here is that that the US cop, played by Dolph Lundgren in what appears to be perpetual 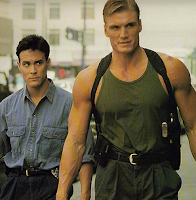 forced perspective (he looks as tall as Gandalf does to the Hobbits), is the one with all the cultural know-how relating to Japan and the Yakuza while his partner, Brandon Lee playing Japanese, has grown up in the US and knows nothing of his ancestry. Of course this nice little switch serves little to no purpose and is soon dispensed to get on with some really objectionable law enforcement.

Lundgren has an axe to grind with the big bad Yakuza (played by Cary-Hiroyuki Tagawa - who appears in so many of these films it's unreal) and despite giving Lee's character a proper talking to about respect tries to shoot him the moment his giant's eyes spot him. Later they bust into a public bath house to hassle Tagawa and his henchmen while they bathe in tiny thongs. This turns into a fist fight ending with a sumo-like thug getting knifed to death by one of our "heroes". Lundgren and Lee of course have to flee the scene when cops arrive because it is absolutely clear to everyone that what they are doing is completely illegal.

Lundgren's cop just lumbers his way through every scene like Frankenstein in denim. At one point he has to rescue Tia Carrere's showgirl from Tagawa's mansion. He just walks in shooting every bodyguard dead, grabs Carrere and casually walks through a patio window, tips a car over and blows it up. He then takes her back to his place to sleep with her despite the fact Tagawa's crime boss had sexually abused her the night before to the extent she was willing to commit sepeku moments before Lundgren showed up.

Despite this clear lack of poise, skill and ethics Lundgren's Chris Kenner is depicted as the perfect human. Not only is he a giant of a man with a perfectly sculpted body we are told he has access to an endless well of abilities. In the opening scene he drops from the skylight of a warehouse into the ring of an illegal kickboxing tournament and announces that he is arresting everyone. The two expert kickboxers decide to take him on but, you guessed it, Kenner can out-kickbox two kickboxers at once. When he takes Carrere back to his icky sex den - a beautiful japanese hut with an outside hot tub and shit - she asks him where he found such a lovely place. "I built it" is his reply, sounding like something Statham's Spy character would say. And of course there in the infamous compliment from Lee's character, who tells Kenner he has "the biggest dick I've ever seen on a man". The dude can even wear this outfit... 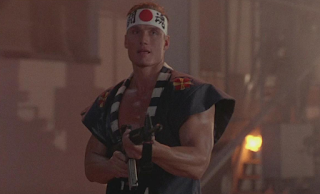 ...for the whole finale and not reduce his enemies to fits of laughter. And yet every time we are told he is amazing he just demonstrates more and more awful policing. This culminates in the American Dragons-trumping final moments where Lundgren tracks down Tagawa in a nearby parade and engages him in one on one combat. After a bloody blade duel Tagawa is impaled and flung like a dart onto a giant Catherine wheel that lights up and spins around. It is a beautiful moment and one that lead to me to lose my drink through my nostrils. 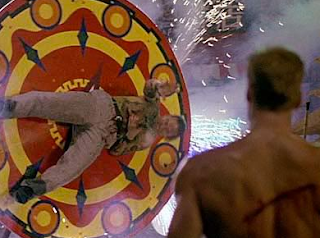 As Tagawa spins in the background Lundgren, Lee and Carrere high-five and walk off into the distance seemingly oblivious to the fact they have just ruined a fucking parade and cut a man to death with a samurai sword in front of children. What a trio of massive bastards.

After watching these movies I don't feel I've learned anything I didn't know about Japan or their organised crime but I did learn that the kind of cops normally sent to tackle them are sloppy, corrupt, incompetent, unnecessarily brutal, petty and oblivious to the collateral damage, emotional or otherwise, they cause.