Inanimate AKA Harbinger Down (Alec Gillis, 2015) 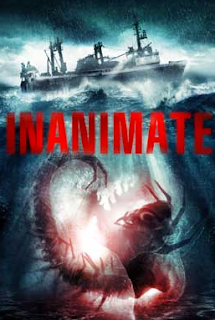 B-movies of old would often piggyback on the successes of bigger movies and produce films that would make up for the lack of production value with bizarro choices and a lack of regard for taste. Unfortunately nowadays when you go to the lower budget end of genre movies whatever promise is offered by an interesting concept or DVD cover is often squandered with piss-weak digital work and a sickly glaze of what we are told is irony while treating Zack Snyder and Paul W.S. Anderson like they're grandmasters of cinema. Inanimate suffers from some similar issues but is a step above the rest by virtue of ripping off a better class of movie.

A University professor and his student assistant hop on board a crabbing boat as it travels into the icy tundra of Alaska on a whale tracking project only to find a sinister organism buried in the ice that escapes and dispatches with the crew in a variety of slimy ways.

If you hadn't guessed already writer/director (and visual effects artist) Gillis clearly loves The Thing and god bless him he's done what everyone would want: instead of remaking or rebooting it he's gone and made his own version. So although it is extremely derivative it does at least feel new and separate from Carpenter's masterpiece. And thank Christ because although at times fun this movie isn't, by any stretch of the imagination, a masterpiece.

The movie's opening scenes can trick you into thinking your watching another Asylum-level production. Although Gillis' insistence of mimicking Carpenter means he at least gets some atmosphere on screen it feels very cheap and anaemic. I'm never going to hold a low budget against a movie (look at the rest of my shit) but this particular texture of cheapness sets off a muscle memory of sorts that forewarns me of imminent digital wankery or Hasslehoff cameos. There are some practical symptoms of low funds as well: There are few wide shots in the opening scenes, partly due to not being able to reveal larger sets but possibly also because some of the film was shot on a real ship and there was little room for camera equipment. As such this means that most of the cast are not often seen on screen in more than a two-shot and this, coupled with an inconsistent range of acting ability and some clunky dialogue, means it is hard to warm to the group of characters we are going to spend time with. So in a weird reverse the low budget impacts more on the drama than the production value.

As wobbly as this makes the opening half hour of the movie the monster action, when it surfaces, is far more exciting. Gillis is a well established effects artist with a real passion for practical work and so this film's big draw is that save for a few shots here and there it is almost all practical. The weird monsters that emerge out of the monstrous goo are again based on The Thing. These pink, slimy beasties come in all shapes and sizes and although the budgetary restraints still show at times they are infinitely more satisfying then the flaccid CGI of most of Asylum's back catalogue. The crab woman is especially wonderful. Alas Gillis employs the dreaded shakey-cam whenever a monster appears and so we never get to inspect these wonderful creatures for long. What we do see is superb though. 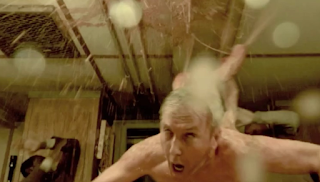 And did I mention Lance Henriksen is in this? It's almost unfair to drop a bunch of only mostly capable actors in with a guy who just eats through every scene even when not trying to. Henriksen even delivers the line "we're going to need a bigger bucket" like it's not the overused to the point of groan-inducing homage that it is. 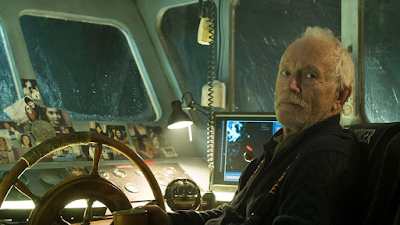 Gillis doesn't really know how to build tension and the dialogue and characterisation are fairly grim. The plotting, however, is pretty good and there is always something going and its nice to see this kind of level of production taking it's cues from movies like The Thing rather than Grindhouse or the Dawn of the Dead remake. It doesn't come close to the movie it idolises but there is enough here to enjoy and it gets a pass from me just for being earnest rather than smug, self-referential and laden with CGI wank. 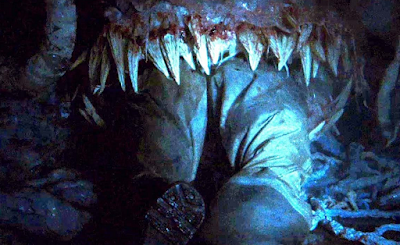