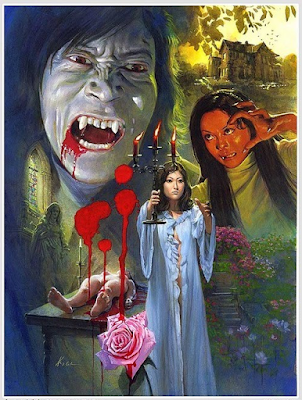 Evil of Dracula is the third in Toho's Bloodthirsty Trilogy which also includes Legacy of Dracula (AKA Fear of the Ghost House: Bloodsucking Doll) and Lake of Dracula. I have not seen Legacy and Lake has some nice moments but is ultimately a little slow moving, saving its major Dracula action up for the final 15 mins. Evil of Dracula, however, is far more rich in gothic imagery and classic horror iconography.

Plot-wise it is fairly routine: A Teacher begins working at a remote boarding school for girls only to find a number of strange occurrences and ailments have befallen the pupils there and before long he begins to suspect the principle.

Over the past twenty years Bram Stoker's monstrous creation has been somewhat neutered. In the book he is a persuasive but full-blooded evil doer; a vile creature hell-bent on inflicting misery to sustain his own miserable life. Early incarnations, from Lugosi to Lee, amped up the seductive elements but remained powerful, imposing and frightening. Gary Oldman's performance introduced a romantic tragedy to the character and although it works in Coppola's flamboyant horror pantomime the many movies that tried to build on this particular element ended up turing the fearsome monster into a lovesick fop. There are endless portrayals of Dracula, and other vampires, who are mopey, broken-hearted wimps with awful haircuts and punchable faces. The culmination of this was Richard Roxburgh's energetic rendering of the dread count as a flapping, wailing, emotionally wounded, wannabe Father who can also turn into a giant bat monster in Van Helsing. It's mad and it is clearly an attempt to bring all the various incarnations of Dracula into one performance that ends up looking like a bunch of flailing and warbling - like a performing arts student in a washing machine. Still, better than Blade 3's tree-trunk in a cape I guess.

Where the hell was I? Oh, yes... so with a bunch of pretty shitty Dracula's to choose from it was nice to discover another Dracula that is more my kind of thing. Here he is powerful without looking huge, pale-faced and ethereal but monstrous and solid and capable of at one moment being intense, intelligent and magnetic and another a hissing monster, mouth stretching to hold its rows of fangs. He doesn't get to say much and screen time is limited, but every scene he is in we are treated to a proper fucking Dracula. 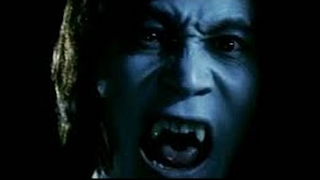 There is plenty going on when Dracula isn't on screen. This is one of those all-girls schools that has women as pupils and although it is, by Hammer's standards, quite chaste it has been noticeably sexed up from the previous movie. The business of trying to work out what is wrong with the pupils is handled well so that you are not just waiting for another one to succumb to the Prince of Darkness.

The last half hour, however, really amps up the horror elements. The imagery gets even more gothic, the gore levels are raised significantly due to a nicely unsettling literal de-facing sequence and the final confrontation between hero and vampire is a nicely escalating fight sequence. Dracula's melty-faced end is fun as well - I really miss those dissolve into skeleton effects.

Evil of Dracula doesn't come close to Hammer's Dracula movies (nor even Paul Naschy's gothic horrors) but it's nice to know that even Japan had a crack at this kind of thing. This is a solid, atmospheric and classical depiction of Dracula and if, like me, you're sick of whiney fops in face paint then it might be worth checking this out.