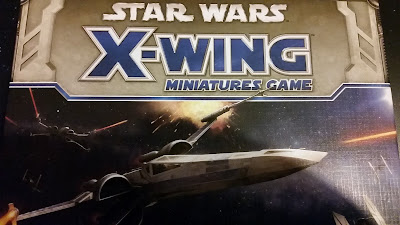 Hop into the cockpit of an X-Wing or a Tie-Fighter and take to the skies in daring dogfights in an attempt to out-manoeuvre and out-shoot your opponents. 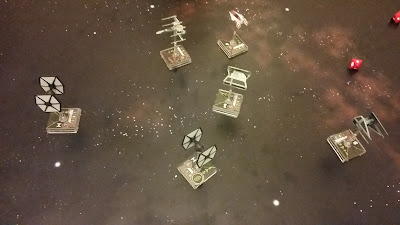 Wing is a quick to pick-up and simple to play skirmish game. In the basic set you pick either an X-Wing fighter or two Tie-Fighters, select your pilots and add upgrade cards (droids, torpedoes, strategies, etc) and deploy them in battle. Skirmishes are played over a series of rounds with each round having three phases. Phase one sees you planning your next move. Each play takes the movement dial and secretly selects their ship's trajectory. The options on the dial correspond with the movements rulers provided with the game. Once everyone has chosen their next move and placed their dials face down on the play area the second phase begins. The pilot with the lowest skill level reveals their movement first. They take the movement ruler they have selected on their dial, places it in front of their ship then moves to their ship to the end of the ruler. The remaining players do the same in order. Phase three is combat. The range ruler is used to check which ships can be hit by others. A number of red attack dice are rolled by the attacking ship, while the defending ships rolls green dice. Every evade symbol rolled on green cancels out a hit on red. Any hits left are taken off the ships total. Play continues until all enemy ships are destroyed. 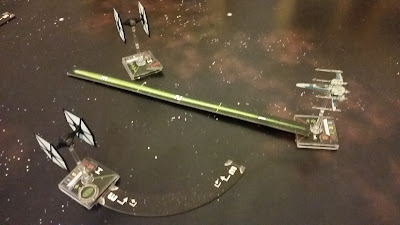 This game is played almost entirely on the table yet a number of additional rules and strategies add depth rather than complexity to the game. At the end of the activation phase actions can be played depending on what are available on the pilots' info cards. These actions can include last minute emergency manoeuvres, award tokens that allow you to alter the results of die rolls and target locks to bring torpedoes and other missiles into play. Pilots each have unique skills and upgrade cards can add strategies alongside weapons. This means that some pilots work well with others while some ships work well in formation. Ultimately a lot of the strategising happens when you are establishing your squadron. 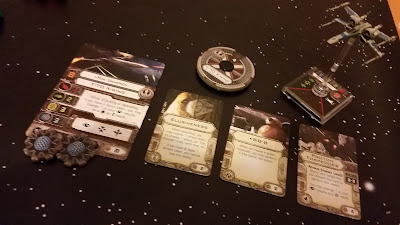 It's Fantasy Flight again, so you can rely on a well made game. As usual there are an abundance of firm and well designed tokens, cards with excellent artwork and nicely laid out rulebooks. The main draw, however, is the ships. Accurately rendered, fully painted and with no assembly needed save the bases these are excellent and worthy of collecting in their own right. The basic set, as I have said, comes with two Tie-Fighters and an X-Wing but pretty much every starfighter from the original trilogy and expanded universe you can imagine are available as expansions. Then there are bigger ships, like Slave-1 and the Millenium Falcon and even super large ships like the Tantive. All ships come with more pilot and upgrade cards and in some cases new rules meaning they aren't just good to look at but add to the game in meaningful ways. 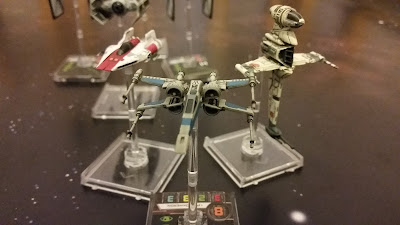 Purists might want to by the original set however I went with the Force Awakens version because the tutorial play was a little better laid out (and it has some non-skirmish based missions in there too). Rather than reading and then trying to work it all out you play as you go meaning we were playing in about 10 minutes of opening the box. The basic play is really simply and accessible by various ages and skill levels. The bolt on advanced rules add depth and running time and might require a bit more of an experienced player but its a game you can learn to play as you go. It really is as accessible a tabletop wargame as you could want. It can be played on any flat surface although playmats (like the one pictured) can be purchased to add a little extra immersion to the experience. 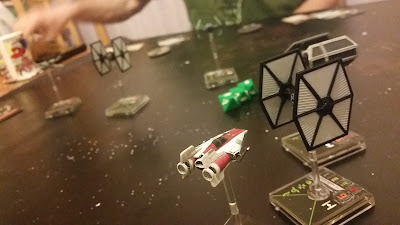 I can't remember a time when I was so quickly impressed by a game. Simple, well built and with seemingly limitless potential to expand this really is a class A tabletop experience and at only £20 - £30 (depending on your outlet) for the basic set it is incredibly value for money. Seriously, you should just go and buy this thing. It's awesome. 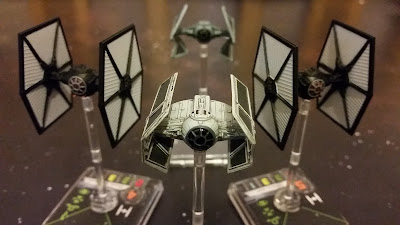