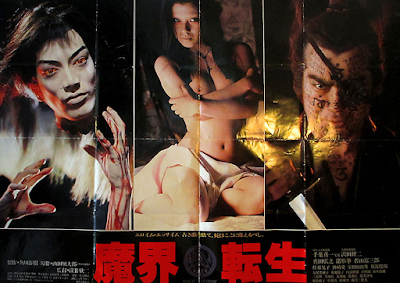 As the camera cranes up from a knotted nettle bush a dense forest of spikes is revealed. This network of spears, each topped with a grey-fleshed human head, is layered between a carpet of thick fog and a hot pink sky. It is the aftermath of the slaughter of an army of Christian rebels and their leader, dressed in ceremonial armour, wanders through this phantasmagorical diorama, swearing vengeance to the skies as they turn from pink to blood red and summoning demons to aid him in his mission of retribution. 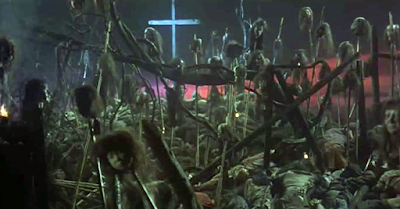 Kinji Fukasaka knows how to open a movie. Samurai Reincarnation is a visually arresting movie, showing image after image that are at once fantastical and nightmarish. Unfortunately the narrative, especially in the first half of the movie, doesn't quite match the aesthetic.

The revenge hungry Christian lord spends a good hour of the movie recruiting his army of demons. He summons a betrayed wife from the dead, prolongs the life of  master swordsman, gives a serial killer the promise of fresh victims and turns family members on each other. His band of undead warriors burn across feudal Japan; their ultimate goal to seduce their enemy, curse his people and bring everything he rules over crashing down in flames. At least that is my best guess because the plot isn't entirely clear (though this is as much to do with the weak dubbing as it is the visual storytelling). The recruitment part of this movie is a little sluggish and even when their are spurts of incident they are often not as thrilling as they need to be. 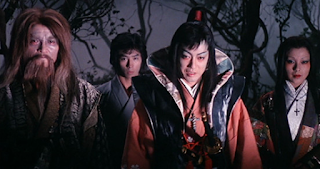 And yet it is difficult to pull ones eyes away even when the movie runs slow. The visuals are stunning and the design, from intricate samurai armour to set dressing, is iconic and stylised. Even costumes that would appear, on paper, to be fairly simplistic are rendered in memorable shapes and textures. Sonny Chiba (yes, Sonny Chiba is the main dude) is instantly iconic in with his wild hair, crazy eye patch and black robes. 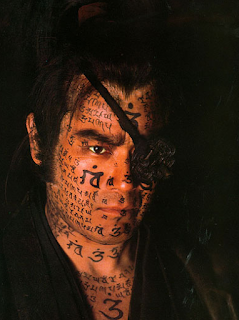 There comes a point, about 70 minutes into the movie, where the action on screen catches up with the wild imagery. A sword dual on the beach is thrilling, efficient and brutal while a running battle against an army of warriors in a flaming Tenchu, captured in a series of ambitiously blocked long takes, is worthy of being the climax. Especially considering one of the fighters is played by the Lone Wolf himself, Tomisaburo Wakayama. Wearing a grey wig and playing a slightly frailer swordsman than we are used to he still gets to let rip with a blade, cutting down assailant after assailant. How this will play for those not familiar with the Lone Wolf and Cub series isn't clear, but for a diehard fan like me I was close to cheering. 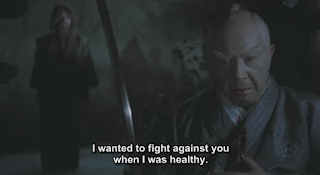 It isn't the climax though. Oh no. Following this battle we get to see a showdown between Chiba and Wakayama in the burnt out husk of the collapsing Tenchu. The battle doesn't quite live up to the promise, but seeing those two titans of Japanese action cinema clash swords in such an epic surrounding thrills none-the-less. 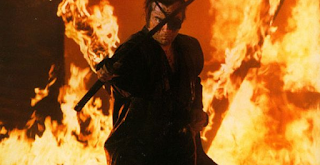 This movie isn't a home run, but it comes close. The languid pace of the first half, no real characters to root for, the lack of fierce blood sprays synonymous with samurai movies and a bewilderingly abrupt ending makes this a frustratingly difficult movie to go crazy over. It is, however, full of imagery and iconography that are unforgettable. Anyone even attempting another Mortal Kombat movie should watch this movie. Samurai Reincarnation doesn't provide much for the brain or emotions, but feeds your eyes and nerves until they are fit to burst. 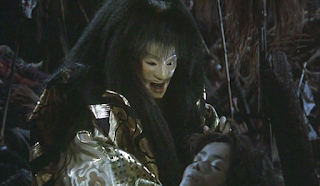