Imagine a magical world where you are a heroic character, blessed with infallible skills and the power to overcome evil and solve all problems in an instant. This is not a Tolkien-esque fantasy world I am describing, nor a delightful fairytale landscape. I'm describing the world of the right-wing paramilitary cop. 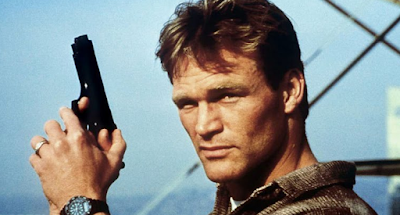 I am a voracious consumer of violent action movies. Movies that emerged from the hard-edged crime thrillers of the 70s and solidified in the 80s as relentless shoot-em-ups before merging with the more stylised action in Hong Kong to form the more operatic and less precise bloodbaths of the 90s. Nearly all of these movies featured muscular men, often in positions of authority, operating beyond the conventional laws that they find so restrictive, to bring down criminal elements in the most efficient and brutal way possible. I've clapped as bullets have ripped through mad mercenary's foreheads, laughed as the necks of drug dealers have been snapped and taken immense pleasure from watching corrupt politicians take high dives off of skyscrapers. And all without any actionable evidence or with concern for the wider consequences.

As I have aged I have found myself become more and more empathetic of other people and more convinced than ever that violence genuinely doesn't solve anything (at least without creating a spectrum of brand new problems). As such the ideologies of these movies have become increasingly abhorrent to me and yet while my sensitivities can often stop me from enjoying the morally skewed movies I loved as a naive and selfish youth I've found that the allure of action movies hasn't faded and this has been somewhat difficult for me to reconcile.

Last month I binged a selection of classic action movies including Tango and Cash, Hard Target, Cobra, The Last Boy Scout, Invasion USA, Stone Cold and One Tough Bastard. Some of these have less troublesome ethics than others while some of these movies have more distracting subtexts but it was One Tough Bastard that not only started me thinking about this little conundrum more seriously but also helped me resolve it.

I won't elaborate on the way my mind connects weirdly disparate dots but after watching the movie I recalled a review I wrote for Hercules and The Haunted World and a turn of phrase I used that I didn't think to apply in this genre. Hercules (or Heracles for the pedants out there) is a guy who doesn't have many problems in life. He generally drinks, laughs and rolls around with women. When a problem does arrive he normally has one of two responses: 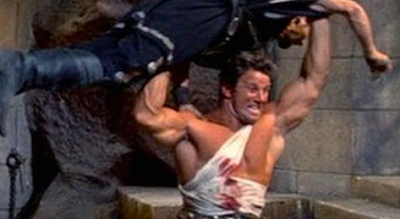 This throwing-based strategy generally works. Hercules uses mere strength to solve all problems and as much as his world is steeped in magic and mythology it is this fantasy of might that is the most fantastical. It is not that we gain satisfaction from watching bad guys crushed under rocks or flung into space, although violence can be made palatable and pleasurable in any number of ways in cinema, but that problems can be solved so easily and so instantly and with so little thought.

In One Tough Bastard  Brian "The Bos" Bosworth plays a military instructor whose Wife and Daughter are murdered in a convenience store robbery gone horribly exciting. Bosworth survives his own wounds and wakes up in hospital only to find the perpetrator under the protective custody of a Detective played by the ever magnificent Bruce Payne and his glorious haircut. It is clearly explained to The Bos that the killer is needed to take down a wider criminal element and bring closure to the many victims of their crimes, that his own justifiable want for vengeance must come second to the needs of the many.  Naturally Bosworth beats up Payne's taskforce (literally as they are explaining this to him) and then goes on a kill crazy rampage to bring the scumbag in. Fuck the needs of the many. 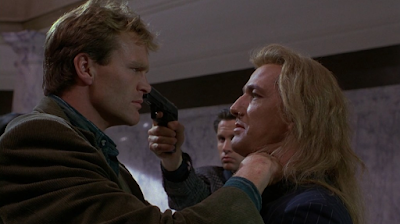 What prevents the protagonist from just coming across as a dick is the specific narrative context constructed around him to make his actions justifiable. To begin with we are never asked to care about the needs of the many. Any potential other victims are never given names or faces and so all we have to relate to is a man whose family we have seen die. That helps the justice of one man (the movie's alternate title is One Man's Justice) override that of anyone else. Secondly, Payne and his cronies are corrupt cops who are protecting the killer because he is in their employment. The world around Bosworth's character has been constructed to validate his actions. 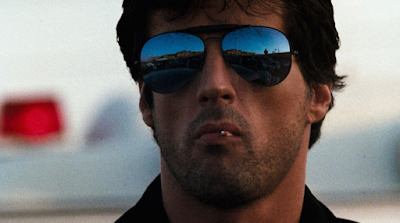 Cobra plays much the same. Marion Cobretti isn't without flaws (all action cops have one or two of the usual hang-ups - drink, divorce, bad diets... whatever) but his nose for the guilty is infallible. He can, without evidence, finger the guilty party and do whatever he can to bring them in. He not only operates outside the law he despises it for preventing him from murdering bad guys quickly enough but his actions are justifiable because we are shown he gets results.

Invasion USA features an army of broadly drawn Communist invaders coming to America and blowing shit up. We see them bazooka white-fenced suburban dream homes, explode school buses, attack a mall at Christmas and attempt to blow up a Church. Their actions are written to validate the overly simplistic politics of the filmmakers (foreign people are bad) and justify the actions of the hero who shows up and blows everyone away with little care for due process. 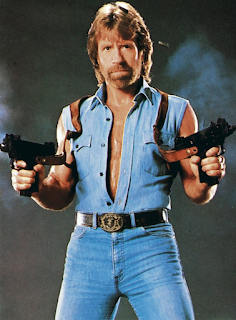 In the real world these problems are complex but politics, consequence, collateral damage and escalation do not exist in these worlds. The gun is aimed, the trigger is pulled and the problem, no matter how complicated, is solved. This is how Roger Murtaugh can shoot an unarmed man holding up a papers showing his diplomatic immunity in the face and keep his job. How many cops have we seen decide to arrest the bad guy only for them to pull a gun and force the cop to shoot them dead? It literally screams at us that due process isn't the way to fix things. 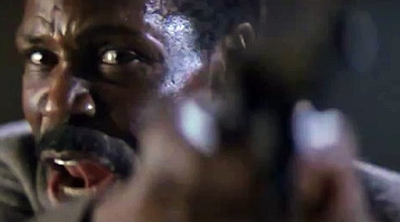 This very right wing approach is pure fantasy. Look at those that try to apply these heroics in the real world. Look at how real conflicts have only escalated and got messier. Drone strikes and vigilante justice don't work in the real world. They are as fantastical a solution as waving a wand and saying a silly word. They are simple solutions and it is that simplicity that still attracts me.

Wouldn't it be wonderful if I could throw a boulder at my overdraft and clear it? Or find a work/life balance by driving a flaming pick-up into my career. If only I could leap out of my front door and unload two clips of ammo into that dick that keeps parking over my drive and have no-one try and take me to task for it. Well, maybe that weasily by-the-books guy that has been telling me to ring the council and solve it that way but I can just lay him out before the credits role.

The solutions found by the Paul Kerseys, John Rambos and James Braddocks of the movie world are morally objectionable but desirable in that they offer simplistic solutions to the complexities of modern existence. They are presented in a narrative that allows their contempt for true justice and borderline homicidal tendencies to be desirable traits and they are gifted with the skills and might required to resolve our problems. I don't love these movies because I want to see street punks gunned down but because the idea that all my problems could be composited into a single, unquestionably evil figure who with the simple squeeze of a trigger would go away forever is weirdly comforting. Oh how it would be glorious to ride a dragon through the clouds, wave my wand and silence that bully or pull a Berretta 92F and solve extremism with one shot. Might is magic... fantasy... and that is how these films still bring me pleasure.