Although movie history tells me that Star Wars spawned a cavalcade of knock-offs I have found it very difficult to locate any movies that come close. Of course its influence can be seen all over the place but movies that actually contain the complete package of whizz-bang energy, parade of design and use of miniature effects and photography that those movies thrived on are quite hard to find. Normally dropping a tier of production would unearth plenty of movies of the required ilk but aside from some TV shows such as Buck Rogers and Battlestar Galactica it's really only Battle Beyond the Stars and Spacehunter that fall within this bracket (and Spacehunter only just counts as I'll explain later). I have therefore decided to drop down even further and look at the ultra low budget, often European, Star Wars... ahem... "Inspired"... science fiction epic. The three films chosen are therefore of a similar era to the original trilogy, have much the same tone, are not comedies or parodies, are not from Japan (as I've written about them a lot already) and although made on the cheap rise above the "men in spandex watching footage of space ships from other movies on a screen" flicks. 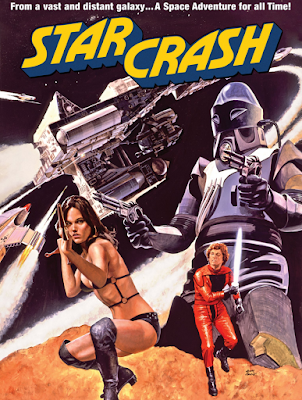 Starcrash is probably the most well known cheapo Star Wars knock-off and despite being devoid of any real narrative has plenty of elements that work in its favour. For the most part it manages to function under its own steam rather than relying on direct lifts from the Star Wars movies. It does have an Emperor,  a jedi-like powerful hero and a Vader-like dude in black armour but each has their own little spin. The Emperor is a good guy, the Jedi guy has indistinct energy powers and the ability to know everything that is going to happen (which means after every scene he looks smug and tells everyone he knew it was going to occur) and our man in black is actually a robot cop that switches sides halfway through the movie.
The cast is great: Caroline Munro leads the movie (and is a proper space hero, not some Princess in distress character) and is backed up by the wonderfully named Marjoe Gortner as the punchable master of everything jedi, Joe Spinell as the perpetually cackling cape-flapping evil Lord, David Hasselhoff who is introduced wearing a golden mask that fires lasers from its eyes, Robert Tessier (you'll recognise him when you see him) and Christopher fucking Plummer.
Since it's a Cozzi fantasy movie there is plenty of stop motion including a giant robot and two robot guardians that Hasslehoff gets to have a lightsabre duel with. Johnny Barry was somehow convinced to produce the score and although the plot is thin and the dialogue laughable the movie never stops throwing bizarre images at your eyes.
The high point is near the end and involves the Emperor launching an attack on The evil Lord's battle-station. Shaped like giant hand that clenches when in battle mode the station is still vulnerable to attacks from coffins being fired through the windows, from out of which burst a couple of soldiers with laser guns. The fact that windows are being broken in deep space and no one gets sucked out is by-the-by (science is not the movie's strong point, the Evil Lord wants the Emperor defeated by sunset even though, again, they are in space) as the laser-fight is actually quite exciting. Sparks fly and soldiers, armed with guns that have giant bat-wings on them, fall in slow motion. It's silly, exciting and fun all at once.
Starcrash isn't a great movie but it has a good cast,  nice score, some half decent production values (considering) and is never boring. 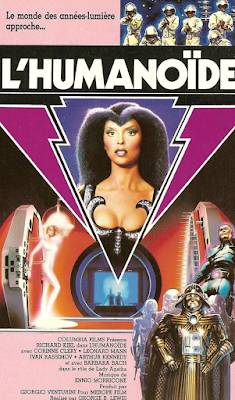 The Humanoid isn't quite as satisfying as Starcrash but is far from the dry, joyless void that many of these knock-offs can turn out to be. Richard Kiel is a space rogue who is turned into an indestructible monster, or "humanoid", by an evil scientist determined to provide an army of super soldiers for an evil conqueror. Barabara Bach plays an evil Queen who squishes topless women in a giant juicer so she can feed on their life-juice (eww) and stay forever young.
The movie bears no resemblance story-wise to Star Wars though actually comes across as more of a direct rip-off due to lots of familiar imagery. Desert planets, a cute robot, a shoot out on a Death Star-like docking bay, a jedi-child in a judo outfit and a villain that looks almost exactly like Darth Vader. It's not quite the parade of joyful absurdity that you'd hope but has enough to keep you going. Ennio Morricone's score is full of delightfully odd choices, Kiel is far more fun and engaging as the rogue hero than he is as the mindless beast (which kind of makes you wish he had more chances to actually act) and the action finale is another exciting space shoot-out.
The stand-out moment has to be when Kiel, with his morality back but still with the mind and strength of a monster, lobs a girder at four stormtroopers and decapitates them all in a row.
It isn't as colourful or relentlessly absurd as Star Crash, but has more peaks than troughs. 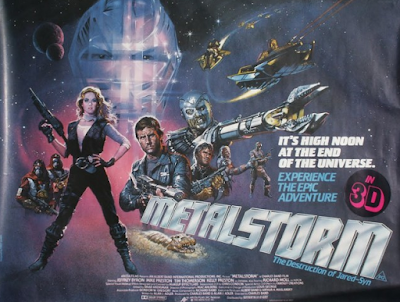 Released the same year as the superior Spacehunter: Adventures in the Forbidden Zone, Metalstorm only just about qualifies for this list. Both movies have more in common aesthetically with apocalyptic movies since they mainly feature armoured vehicles crashing around a desert. What makes them qualify as Space Opera, in my mind, is that they are both set on alien planets and feature interesting creatures and technologies not normally found in your average Mad-Max homage.
Metalstorm in particular features lasers, a space-sled chase, crystals that induce evocative nightmare visions and the movie's ace in the hole, Baal. This badass motherfucker is a green skinned cyborg who shoots thick green acid out of his robotic left arm. He looks like a Masters of the Universe character brought to life and brightens the screen every time he appears. Oh, and there is a glowing energy monster at one point as well.
Nothing gets quite as fun as the previous two movies and it could do with at least one spaceship battle (though the flying sled duel counts). It won't quite quench the thirst for Star Wars antics but it does offer something different from the previous two offerings. Watched in this order you'll notice the amount of desert increase in all three films meaning that you probably won't even notice the absence of space in this particular space movie. And the armoured vehicles crash really well.

The inclusion of a film that doesn't included any space combat should be an indicator of the slim pickings available for those looking for intergalactic war movies with the same vibe as Lucas' space saga. Once your done with the A list, have watched the best of the B-list these are the three you are probably best watching, if only for the space coffins, the multi-decapitation and the stone-cold G that is Baal.