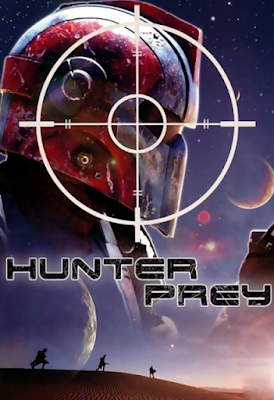 Low budget and/or straight to DVD sci-fi adventures tend to rock the same aesthetic nowadays. Hey, if bleach-bypass effect grading, cool blue tones and cut-scene CGI are you're thing then knock yourself out. I, on the other hand, miss the days of miniatures, practical creature effects and stop motion. That's not just for any nostalgic sentiments - that shit still works. If you need proof then look no further than Hunter Prey.

Former Stan Winston Studios effects artist Sandy Collora made a name for himself directing the Batman fan short Batman: Dead End. Although there was talk of him taking the reigns of a whole host of major studio features his next, and to date last, feature was this low budget science fiction survival movie.

A ship transporting three soldiers and their prisoner, the last kind of its race, crash land on a remote desert planet. The prisoner escapes and is hunted by the surviving soldiers; or is it hunting them? To reveal much more about the plot would do the movie a disservice, not because of any particularly major twists but because the way information is revealed over the course of the narrative has been done with great care. It is that great care that keeps the movie interesting as most of its runtime is just two people wandering around a desert.

Although it is set in a space opera style universe it is more Enemy Mine than Battle Beyond the Stars. The low budget means that the scale is small. The opening shot, and one of the films few CGI effects, sees space debris hurtling towards the planet. After that we already on the surface as our protagonists wake from the crash. There is a nice bit of model work at the end but beyond that the film is just a desert, an occasionally digital planet on the horizon and a couple of dudes in super-cool armour. 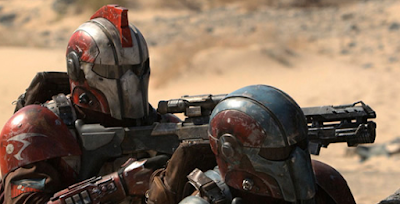 The design influences on the soldiers are clear, so if you think Boba Fett has got awesome dress sense you'll be happy staring at these guys. The prey, on the hand, is rocking an outfit that is part Wrath of Khan engineering suit part Battlestar Galactica spacewear. The weapons and alien make-up are good too.

And that is pretty much all there is to it. Its not up there with the best sci-fi films ever made but it features beautiful desert photography, a nicely woven story and some nice, albeit slight, production value. If only more low-budget sci-fi could work out a way to make them like this...
Labels: Reviews