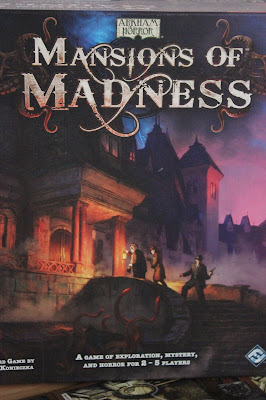 Be consumed by Lovecraftian lore as you and your team of supernatural investigators explore a series of foreboding mansions uncovering clues, solving puzzles and doing battle with unspeakably foul beings until you can find and stop the source of the evil that pervades the halls. 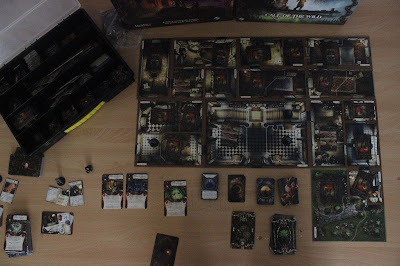 One player becomes the Keeper and uses a series of room tiles to build a mansion as instructed by the scenario rules. Once set up is complete the Keeper takes on the role of the evil that has infected the mansion. Using an army of monsters and event cards the Keeper will try and complete their secret objective while the other players, who have taken on the role of the investigators, try and stop them. Players move their characters around the spaces in the mansion using their allotted actions to move, search and fight amongst other things. Each room has a stack of cards. Some of these cards will contain nothing of interest, some items that can be used as weapons or tools while other, more important stacks, contain clues that will lead the players to other rooms in the mansion. These more vital stacks are often topped with a lock and/or obstruction card that require a particular item or the solving of a puzzle. Once all the clues have been found players should be able to determine what the Keeper's objective is and what rooms contain items vital for stopping the Keeper. The whole game is timed by a stack of event cards that when the listed number of turns have passed are flipped and resolved. When the last card is flipped all secrets are revealed and the players will learn whether they are able to succeed or whether evil has prevailed. 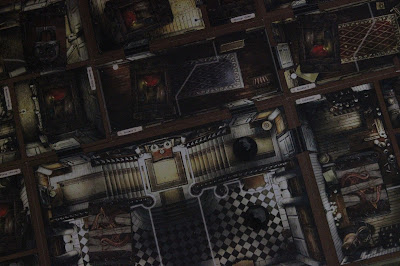 Mansions of Madness thrives on what is happening between the players. This game places itself somewhere between traditional board gaming and roleplay in that it encourages storytelling and atmosphere building. Each scenario presented comes with rich "flavour text" that sets the tone and provides a back story to the events. Each card also contains evocative descriptions of the events occurring in an attempt to make players feel they are living a Lovecraft story rather than just playing in his mythology. A Keeper happy to embellish and perform, therefore, can really help a game feel more than dice rolling and card flipping.
With a lot of games like this the objectives are normally made aware to everyone. In Mansions of Madness the players don't know what the Keeper is trying to achieve until they have revealed all the clue cards and this means they need to employ some skills of deduction of their own while the Keeper will need to throw them off the scent by sometimes sacrificing creatures or acting in ways that are contradictory to the actions of previous rounds.
The Keeper inflicts physical damage when monsters attack but can also issue different types of mental trauma that inhibit players actions. This means there is a layer of strategy involved in dealing damage as well. 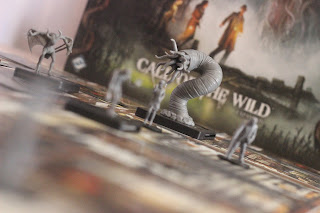 Fantasy Flight Games produce beautifully crafted products and Mansions of Madness is one of their best. The basic game is stocked with multiple decks of cards, thick cardboard tokens and game tiles (including a variety of logic puzzles to solve) and a legion of wonderfully sculpted playing pieces. Incredible artwork adorns every item and each assembled mansion is a joy to explore visually before play even starts. Everything, even down the tactile qualities of the materials used to construct the pieces have been designed to add to the experience. It's almost worth buying the game just to own the pieces. 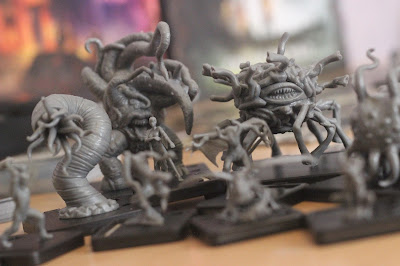 This is not a game of beginners. The set-up alone is long, complex and fraught with the potential for error. Since the game functions on clues leading to one another each stack of cards must be compiled exactly in the order stated in the scenario guide. The cards required are often being taken from thick wads of hundreds of cards. The process of going through them and finding the right ones, then assembling them into the stacks would be a lengthy process alone, but knowing that one wrongly placed card can render hours of play null and void means that the level of care required increases the set-up time considerably.
Once the game starts and players get into the swing of moving around and searching it moves quite freely. Once things hot up, though, the game can get quite complex. The sheer number of cards and tokens can become difficult to handle. There are also rules for a whole range of game mechanics (such as barricading doors, hiding in boxes, using spells, solving logic puzzles, etc) meaning that players wanting to explore all available options will often grind the game to a halt while rule books are scanned and mounds of tokens searched through. This gets easier the more you play but can often make early games run very slow. Packing all the cards and tokens that have been thrown about during play can also be a bitch. 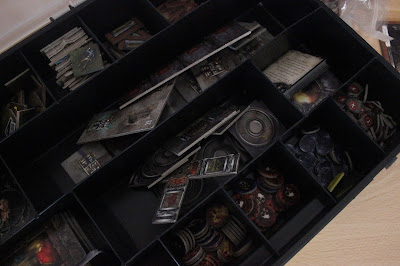 The game can also be very difficult. In most of the scenarios I have played it seemed that one wrong turn or missed clue can leave players without enough time left to complete their objectives. The finite timing on the game is a good thing (as games like these could go on for hours without it) but it is pretty unforgiving.
That's not to say this game isn't worth the effort. If you're a fan of Lovecraft's worlds and played a few of these before there is a lot to enjoy and to be honest most of the stress of managing tokens, working through encyclopedic rule books and spending a good 45 minutes sweating over the set up rests with the Keeper alone.
There are a number of expansions for this game. Call of the Wild takes the action outside in to the mansion grounds and woods and although there are a few new rules thrown in the set for these scenarios is far quicker and less likely to go wrong. It also seemed easier for the players to win some of the scenarios.
There is a new addition of the game due out that removes the Keeper from the game, instead using an app to generate the clues. This should make the game far speedier to set up and play.
One of the games core strengths, however, is replay-ability. The core game comes with a number of scenarios and the key narrative elements of each scenario can be changed. The Keeper essentially decides from one of three "twists" which in turn informs where the cards are laid. This means you can play the same scenario three times and it be different each time. Players also get a choice of weapons and traits meaning their characters can be played in different ways as well. 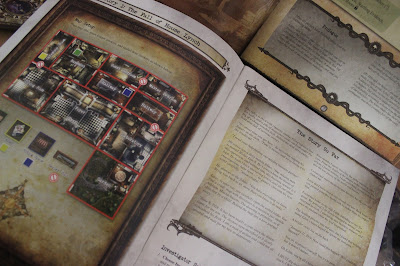 A finely produced game that immerses you in the world of Lovecraft. It's time consuming to set up and tough to win if you're a player but rewards repeat play and for the most part is an atmospheric and exciting game. If you've played tabletop or roleplay games, like your horror and are willing to spend an afternoon on a game this comes highly recommended. 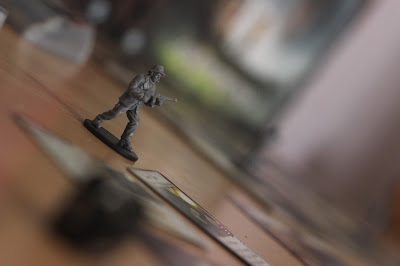