Island of the Fishmen AKA Screamers (Sergio Martino, 1979) 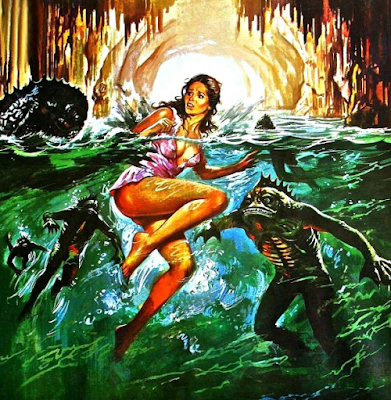 I love a good aquatic creature feature. There is nothing quite as satisfying as watching a performer in a full rubber fish costume emerge from a shimmering lagoon to mess with someones day and Island of the Fishmen is one of my favourites.

Sailors from a shipwrecked prison ship find themselves cast upon the beach of a mysterious island where a couple of them are almost immediately picked off by a piscine fiend. If that wasn't bad enough the island is littered with traps and dangers. A few of them traverse these hazards and arrive at a large plantation style mansion where the dastardly Rackham lords over the local black magic practicing population and keeps Barbara Bach's Amanda Marvin in semi-captivity. As the plot unravels we find that Rackham has Amanda's scientist Father working in the bowels of his mansion creating the fishy foes to explore a sunken city (which may or may not be Atlantis) in search of treasure to line Rackham's pockets.

The movie is an absolute delight. The Fishmen costumes are wonderful and look good either stalking on land or cutting through the water in some of the movies nicely executed underwater sequences. The locations are exquisite and the sets, that include mad scientist labs and underwater docks, are rich in detail. Performances are on point too, especially Richard Johnson who eats the scenery like Pacman.

The narrative plays out slowly, building to an exciting finales that includes fist fights, an army of Fishmen and an erupting volcano. That doesn't mean the film is ever boring, though, as there is enough fishy frights peppered throughout the films earlier moments. 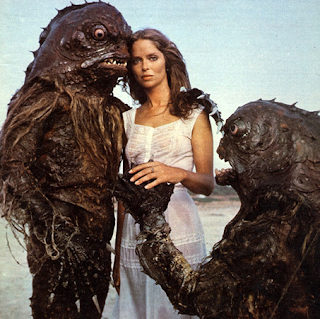 Although blood is spilt and Bach does get a white dress a little wet in one scene this is not as gory or sleazy as one would expect from an Italian horror movie made in the late 70s. In fact when it was bought for release in the US it was deemed not gory enough. In addition to new scenes being filmed a trailer was especially shot showing a pulsating organic creature as a voiceover explained the movie would show audiences what a man being turned inside out would look like. Renamed Screamers for this release audiences soon complained that the film had nothing to do with people turning inside out and that the footage in the trailer didn't appear in the film at all. The footage was edited into the movie (although I can't think for the life of me where it would have fit) and re-released. The film largely sank into obscurity, especially outside of Europe and had been difficult to find. One reason for this might have been due to copyright.

There are shades of Dr Moreau and, to a lesser degree, Lovecraft's Shadow Over Innsmouth but you can't sue a film for being derivative. More on-the-nose was some of the footage re-shot for the US release. Investigating the lab our heroes discover a creature being genetically engineered in a casket. In the original cut the creature looked like this:

In the newly shot footage, however, the creature looks a little more familiar:

Universal have been famously protective of the designs for their monsters and I can't imagine they'd have been happy with this movie using the likeness of one of their greats let alone the implication that this movie is a canonical origin to the Creature.

All this aside the original Italian cut is a fun monster movie with significant production value. It feels very much like classic Hammer at times and is well worth your time if you like this sort of thing.