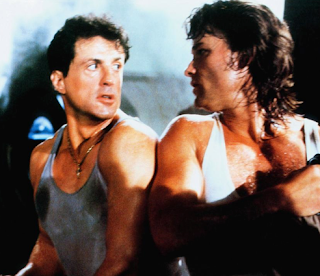 Although the concept of homoeroticism doesn't inherently imply subtext it has, in a cinematic landscape that has only been progressive in fits and starts, often only been visible to those willing to read between the lines. This has been especially so in the hyper masculine action movies of the 1980s. Apart from, that is,  Tango and Cash.

Tango and Cash is, without doubt, an erotically charged story about two cops who learn to love each other despite their differences. Since it was produced in the 80's the codes now associated with a myriad of different sexual and cultural identities have all been lumped into woefully broad 'not straight' bracket (so I hope it doesn't appear as if they are my insensitivities or ignorance coming through) but both characters are clearly identified as having sexual identities that separate them from the then considered "norm" while being compatible with each other. This isn't a buddy-cop movie but a lover-cop movie. There is no subtext, only text.

Ray Tango (Stallone) is a well-dressed, articulate and debonair cop (think Paul Feig with a gun) who is happy to bend the rules but ultimately likes to play things by the books. He has a nice, well-decorated office and takes a great deal of care for his Sister (Teri Hatcher). He also shoehorns in a number of jokes about marrying men that kind of come out of left field. He is in no-way repressed, but is a little conservative with his sexuality. Tango's gun, incidentally, is a compact nickel-plated revolver: it's small, classy and modest but gets the job done.

When the two of them meet they are framed by Jack Palance's super-mobster and they find themselves in prison. Their courtship begins for real when they share a shower together and compare penis sizes. Again, this is not subtext - they actually check each other's dicks out.

Palance does not intend for them to survive prison and formulates a plan that culminates in a brutal torture sequence at the hands (and jaw) of Robert Zdar. Cash nearly buys the farm, which clearly upsets Tango, but they are saved at the last minute and set about breaking out.

Once on the outside they split, with Tango leaving instructions for Cash to meet him at his Sister's strip club-come-night club. Cash obliges but is followed by the Police and so has to leave the club in full drag, flirting with a Police officer as he does. 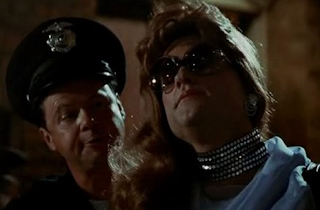 Cash is clearly comfortable and confident in women's clothing, so much so that he doesn't fully change out of it when he and Tango's Sister get back home. The two have some chemistry with each other and this leads to a massage. When Tango gets home and sees the two of them together he is somewhat perturbed (as the camera angle is designed to make it look like they were having sex) but calms a little when he realises the object of his affection isn't making moves on his little Sister and is still potentially available. The sister is a bit of red herring; it is assumed that Cash fancies her but he never actually explicitly makes moves on her. Nowhere near as explicit as his moves on Tango. He makes a crack about dating her towards the end but this is merely to rile Tango rather than to state intent.

In the final scenes Palance's empire has been destroyed and the trio perch on a ridge, overlooking the fireball and talking about the future. Tango and Cash talk to each other, almost entirely ignoring the Sister between them. Her only offering is that the two of them "work" well together. The final shot; a newspaper still of the two as re-instated Police Officers, is oddly framed. They have high fived but are holding hands in mid air while brandishing their ID badges as others look on and smile. It is composed as a wedding photo, their shields displayed like rings. Check out the guy on the left, he couldn't be happier for them. 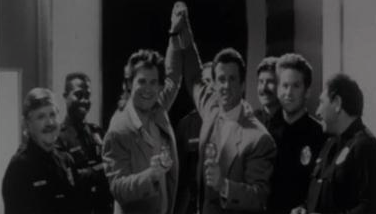 Along the journey are a number of other little clues and so many references to asses it's hard to shake the man-on-man frisson generated. Only the sister is the spanner in the works, the last vestige of heterosexuality thrown in to make this all less obvious but even she is largely superfluous and used merely as barrier for the two super-cops' burgeoning relationship. Even the marketing seems to have been designed to push this: The adjectives available to describe an action film are abundant, yet the international DVD cover runs with "Stallone and Russell deliver sweaty excitement (and) sex appeal" while of the three screen shots on the back the one is Russell in drag.

Elsewhere the film just goes nuts. Palance keeps mice in a box and has a maze for them built into the decor of his office just to make a point. Brion James' infamous accent will make you forgive Dick Van Dyke and the gloriously over-the-top finale, a cross between Mad Max and Knight Rider, comes out of nowhere. Even amongst all this craziness the feeling that you'll leave this movie with is how lovely a couple Tango and Cash would make.