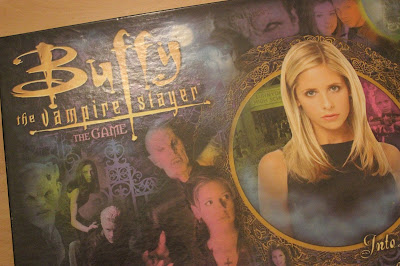 Some time back when there were family board games, specialist miniature war games and little else in between Hasbro produced a Buffy board game that looked like your typical tie-in but introduced elements now familiar with regular tabletop enthusiasts. Take on the roles of your favourite scoobies and do battle against the forces of evil in one of four big-bad based scenarios. Will you defeat the Master, outfox the Judge, confound the Mayor or destroy Adam? 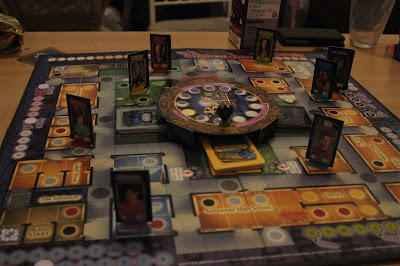 One player takes on the role of evil and selects one of the four scenario cards that detail the basic set ups and the objectives for both bad and good. The evil player then takes control of evil vampires like Drusilla, Darla and Spike. The rest of the players share out Buffy, Willow, Xander and Oz between them. The good objective tends to be destroying the bid bad while the evil objective tends to be getting the minions to collect the items required to resurrect/transform the big bad and wipe out the good guys. Along the way good players can pick up research cards, weapons (some of which allow you to stake vampires) and help (in the form of some of your series favourites) while evil players pick from the evil deck for cards with similar effects. Artefact cards with special items, some integral to completing the objectives, are hidden under the corners of the bard and spell dice used to retrieve them while fights are played out with dice rolls. 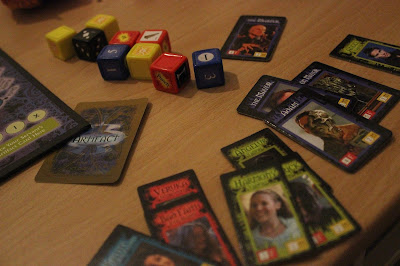 Pitting players against one another is always good for above the table play and your evil player can really stick it to the goodies. While some weapon cards allow heroes to wipe out vampires with one jab of a wooden stake evil cards can allow vampires to sire heroes and use them against their friends. Strategy is key, especially in the Judge scenario which requires a single character to have both an artefact and a specific research card with which to destroy it. In one of the games we played these cards were split across two characters on either side of the the board and it took some thinking and lucky rolls to get one of them to run the gauntlet of vampires to make the exchange. Additionally the evil player cards are hidden behind a screen meaning they can resurrect villains or sire vampires seemingly out of the blue. And then there is the phases of the moon chart. Certain die roles can advance the moon into different stages, some benefitting evil while other benefiting heroes. In the full moon phase Oz turns into a werewolf which makes him a more formidable opponent but also makes him lose all his cards (disaster if he's carrying a vital artefact). Sunlight, on the other hand, causes all vampires to scarper to the nearest indoor building. Triggering these phases at the right/wrong time can have a massive impact on play and provides a number of ingenious ways to screw over your friends. 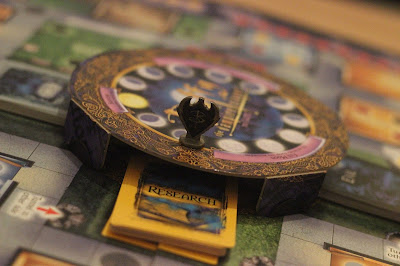 With the exception of the nice metallic phase counter everything else is cardboard standees. It's fine, though doesn't give you a lot in the way of collectables. The board has two levels which is cool and although the map of Sunnydale is a little Cluedo in its design all of the key buildings from the series are there. This is also the case for characters. Although you only get to play a select few the help deck provides you with not only fan favourites but some real obscure characters too. The dice are a little weak being that they are hollow plastic with stickers on. Everything else is well built and works and the design is clear though nothing particularly evocative. 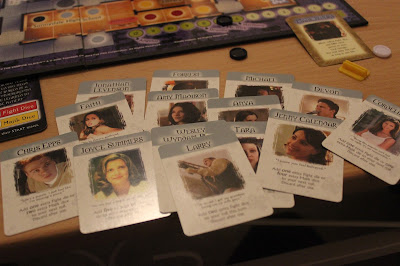 The game is actually pretty simple to play and works as an entry level game for those looking to escape your basic board games. The four scenarios are pretty similar and don't offer a whole lot of range, meaning more experienced players may find it doesn't have a lot of staying power. 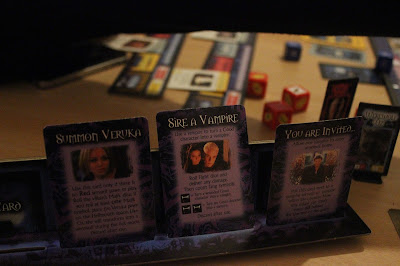 It's fun and it's been made by and for people who love the show. It's a nice way to ease people into more complex play it's just a shame the crafting of some of the counters and die isn't quite as a exciting as it could be.