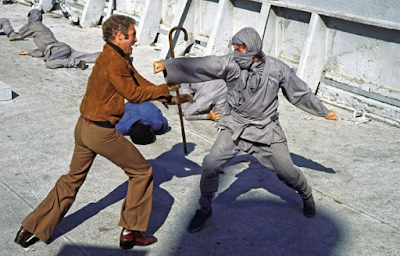 Sam Peckinpah directed a movie where James Caan fights ninjas. Let that settle in for a second. We good? Okay. Here comes the bad news: not only is it not great but the ninjas don't show up until right near the end.

Caan and his partner, played by Robert Duvall, are two private contractors working for a shady government agency who are tasked with playing bodyguard to an individual of great importance. Duvall, however, betrays Caan and cripples him before going onto murder their MVP. Caan gradually works himself back to health before taking on a job that brings him back into to Duvall's orbit so that he can exact some much desired revenge. The job: protect a Chinese crime family from being executed by a ninja order.

This all sounds like juicy stuff and that's before you contemplate what Peckinpah might bring to the table. It is, by all standards, a fairly fun-of-the-mill seventies crime film that comes with all the expected conventions. There is an improvisational flow to the dialogue and in the first ten minutes the rapport twixt Caan and Duvall is effortlessly established. Yes, Duvall is teasing Caan for sleeping with a girl with an STD which mainly consists of him laughing maniacally in his face. It plays fairly misogynistic and taking into account this sexual encounter happened at one of those 70's parties where women lounge around with their boobs out means it's safe to say the politics of the era are as present as the conventions. The film seems to be covered in a thick film of dirt and grit and the violence is fast and brutal. If you like the textures and sounds of 70's movies there is plenty to enjoy here.

What disappoints is that this is neither classic Pekinpah (his trademark slow motion cross cutting doesn't come into play until the final action scene) and the ninjas are absent for most of the movie. Both of these missing elements come together delightfully in the final sequence as Caan and ninjas battle it out on the decks of abandoned ships. It's not Wild Bunch, its not even Getaway, but its fast and fun and set in a stunning location.

The witty opening text and the raw new wave feel of the dialogue scenes could lead you think this might be an intelligent study of black-ops in the US but the movie ends up being a fairly average action film. It's fast-paced and exciting but does not live up to the promise of either its subject matter or the talent involved.

Ninja Abilities – Zilch. They can't even take out James Caan with a walking stick.

Ninja Mythology - Ninjas have a flair for theatrics and like to build up an entrance. Sometimes, though, they can build it up so much when they do appear it is something of a disappointment. Know your audience ninjas!