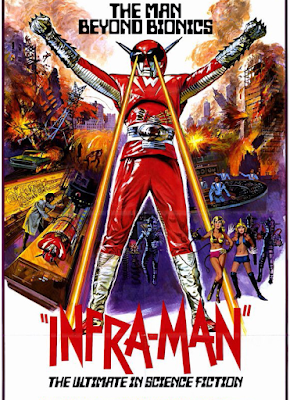 The legendary Shaw Brothers take the formula of masked super-hero versus crazy monsters so popular in Japan (Kamen Rider, Super Sentai, Ultraman, Spectreman, etc) and serve up their own bat-shit crazy version.

When Princess Dragon Mom; a valkyrie-like warlord who can transform herself into a dragon, brings a horde of monsters to invade earth it is up to a professor and team of scientists to stop her. Much like the various series Inframan takes inspiration from the team of scientists consists of a multitude of young men in crash helmets, colourful foil jump-suits and armed with pistols. In the event of an alien invasion it is down to the science team (rather than the army) to fight them off. The professor therefore introduces (and by that I mean volunteers) one of the scientists to the Inframan project.

He is augmented with super-human DNA and cybernetic engineering that allows him to transform into a super-powered robot covered in what we are told is an ultra-hard alloy but that looks like the kind of stuff used to cover hard edges and corners in children's play areas. Regardless, Inframan takes to the skies to do battle with the frequent attacks by the evil Princess.

First up she summons a plant creature and a drill-handed turd monster to cause havoc. Drill-hand hunts down one of the science team so that he can be kidnapped and brain-washed while the plant creature sinks into the ground and unleashes its tendrils into the science lab. Of course Inframan shows up and gives the vegetable bastard what-for.

While Inframan is busy thrashing the vegetable (not a euphemism) the kidnapped scientist is being brainwashed. This leads to a motorbike chase and a showdown with another of the Princess' bizarre creatures and her army of frankly awesome looking skull-faced stormtroopers. Although dangerous, this gives the science team a real opportunity to gather some useful data. I was lucky enough to get a hold of one of the science team's write-ups of their experiment:

Aim - To defeat a big orange Spider creature and the skull-faced dudes it is hanging out with.

Apparatus - Motorbikes, foil suits, the broadest definition of the term "scientist" that we can get away with.

Method - Drive the motorbikes into the soldiers and hope for the best.

Hypothesis - One of our group will suddenly transform into a red kung-fu robot and kick seven shades of shit out of the bad guys.

Results - To begin with all went as planned. Granted, most of us just fell off our bikes and got the crap kicked out of us but as I predicted one of us turned into a robot who slapped that Spider guy about a bit. What took us by surprise was an appearance from Thing 1 from The Cat in the Hat that turned up and started shooting laser beams at us. Our robot friend quickly blew him up with his own lasers and returned his attention to the Spider dude who had now grown into the size of building. Our robot therefore decided to grow himself to the size of a building, using science no doubt, and threw the Spider into a nearby power plant.

Conclusion - I have, at some point in my life, sustained a serious brain injury the effects of which are only just starting to show.

After all this tomfoolery the Professor is kidnapped and transported by way of speedboat to the Princess's lair. Inframan must kung-fu his way through legions of skull-faced guards, destroy the last of the monsters and do battle with the evil Dragon Princess herself.

As you may have guessed Inframan is never boring. The effects and costumes are as ropey as you'd expect. Its as if the Shaw Brothers had produced a Pertwee-era Who. Yes, it's that awesome. The costumes may be poorly constructed and painted by an infant art-class but the colourful exuberance of the whole affair is hard to dislike. The finale is a prolonged martial arts battle in the Princess' lair and is controlled chaos at its most joyful. Fists fly and feet flurry as bodies are thrown into the air exploding whatever ever they make contact with (even water). The two tin robots with slinky heads are the icing on the cake and final battle with the Princess in Dragon form ups the absurdity even more (seriously Inframan, you're not going to be able to cut her head off. Give it up man.) 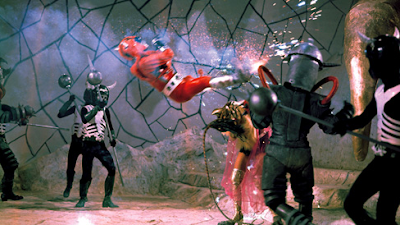 This movie was made for me: it's got super-heroes, martial arts, monsters, kaiju and shuns narrative logic and integrity for imagination way beyond its ability to make real. It has one of my all-time favourite shots in a movie and above all else the way the drill-monster walks makes me giggle like a right tit. Inframan is an all-time fave. Bonkers and brilliant.