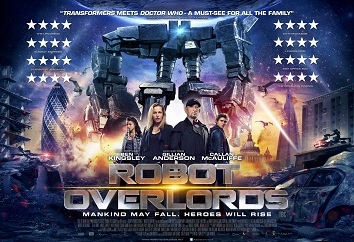 Jon Wright, Director of the excellent Grabbers, again delivers a low budget genre surprise. Years after robots invaded earth humans are imprisoned in their own homes. The robot invaders want to learn as much as they can about the human race and promise to leave the planet unharmed once they have found out everything they need to. It is this promise that convinces some of the human race to volunteer (or collaborate) and enforce the imposed rules to make the whole scenario move that much smoother. Smoothness, however, does not make for exciting drama and so a group of kids, lead by a young boy who feels his Father's disappearance has something to do with the invasion, short out their electronic trackers and head off into the abandoned cities dodging robot drones and collaborators along the way.

The movie's poster might lead you to think that this is a cheap Asylum Transformers knock-off but as with Grabbers Wright proves assumptions are dangerous things. From the start the movie is well shot and focussed on creating characters and situations that are engaging. The story moves along briskly and has some nice attention to detail. 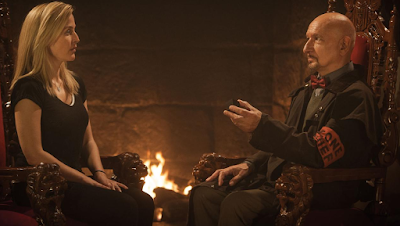 Appearances from Gillian Anderson and Ben Kingsley help spice things up and it is clear neither of them are phoning it in. In particular Kingsley's character is quite meaty. The young leads are fine but aren't particularly charismatic and since we stay with them for most of the running time the whole film feels like a budget YA adventure (for better or worse).

Wright again manages to produce some excellent effects work from his tiny purse. The robots come in a few shapes (including flying drones, gun mounted crab-droids and a super creepy robo-child) and are all convincing enough. The main walking robots are the weaker link, looking a little like the kinds of robots I used to make out of lego as a child. They still work though and it means that the screen is rarely absent cool things.

The effects really come to a head in the giddy finale which has a balancing act on the tip of a mid-air space craft, a Spitfire dogfight and a money shot that competes with most mega-budgeted blockbusters. The fact that all this happens in broad daylight is even more impressive. So ambitious and exciting was this climax it is almost the sole reason I'm recommending this movie. 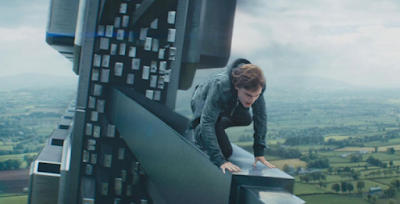 Above all else the film feels very British. There are shades of Tripods and new-Who and it never feels like it is trying to Americanise any of its elements.  It may not be the home-run Grabbers was but it is a home grown and fun sci-fi adventure, suitable for the family. It also clearly states the case that Jon Wright should be getting a lot more gigs than he is.