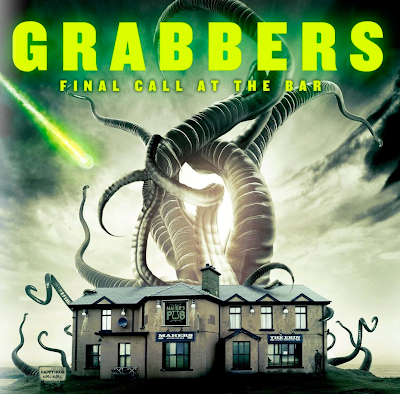 I'd been putting off watching Grabbers for some time, largely due to some prejudices I have towards comedy horrors. You see, after Shaun of the Dead hit as big as it did, a slurry of copycats splurged their way onto the market attempting to cash in what was seen as a fairly easy genre-hybrid to replicate. Unfortunately horror comedy is by no means easy.
Some attempts are valiant but often end up either being too scary to be funny or too funny to be scary. Attack of the Werewovles is a fine example of a film that is for the most part excellent, yet suffers from each of the genre conventions working against each other with every well-earned horror moment being ever-so undermined by the comedic tone of the movie as a whole. If this were the worse case scenario then I could live with it, but actually most horror-comedies are neither funny nor scary and usually consist of unlikeable losers yelling swear words at each other while poorly-staged zombie gags play out around them.
Finding out that Grabbers featured tentacle-based monsters didn't help either. I love me a tentacle, but knowing this was a modestly budgeted film that would likely use undercooked CGI to render them made the chances of this film being ninety minutes and change that I would enjoy very slim indeed.
What motivated me to give it a try I don't know, but boy was I pleased that I did because in terms of balancing these too often conflicting tones Grabbers joins Sean of the Dead, Evil Dead 2 and An American Werewolf in London in getting the mix just right.
Police Officer Lisa Nolan (Ruth Bradley) arrives on a remote Northern Irish Island to help support alcoholic Officer Ciarán O'Shea (Richard Coyle) hold the fort while his superior officer is away. Unfortunately giant blood-thirsty alien squids crash land and start to eat their way through the already small population.
Most of the film plays it straight only dipping into comedy when we are introduced to the locals. Yet the comedy is never at the expense of these characters but actually allows them a little depth beyond being monster-fodder. In fact, making these characters amusing allows us to warm to them, and therefore care about them, in a way that we normally wouldn't. 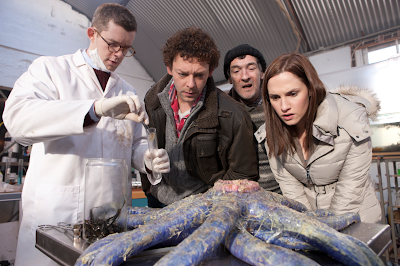 The discovery that alcohol poisons these creatures leads the populace to stage a lock-in at the local and get utterly shit-faced. It would have been easy for the writer to hang the whole film on this comedy hook, yet rather than use it as gimmick it allows the director to play with the absurdity of the situation. Both Evil Dead 2 and An American Werewolf in London use the degeneration of the characters mental state to court delirium and often generates humour from allowing the characters to actually interact with the fantastical rather than just running away from it. In this case it is the booze-sodden brains of the characters that allows us to see the horrible events through their eyes not as horrific and disturbing or silly and ironic, but by hitting what I think is the most important tone when playing with comedy and horror: hysteria.
Performances back up the hard work of the writer and director, in particular Bradley and Coyle who both create warm and relate-able characters. Coyle ensures alcoholism never sucks the fun out of proceedings while equally ensuring it never becomes schtick. Bradley never allows her characters initial stuffiness to make her unlikeable. When she is eventually talked into getting drunk the shedding of her stiffness is a delight to watch but again never at the expense of the character. These two actors turn in almost invisible performances creating not characters but actual people. 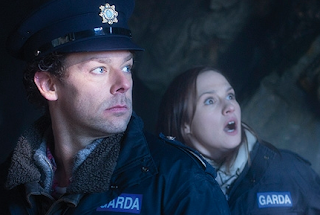 The film is gorgeous too, with production value oozing from the screen. The photography of the island is beautiful and the choices of location are always evocative. When the narrative threatens to box us in at a pub it comes as a relief that rather than settle on a one-locale siege the film spends just the right amount of time there and then swiftly moves to an exciting excavation site for the finale.
My worries about the monsters were also unfounded as I cannot recall a single duff effects shot. The grabbers are distinctly Lovecraftian in conception being alien and tentacley and all. Even the tubular baby monsters, kind of meat Slinkys, are reminiscent of the Old-ones from At the Mountains of Madness. 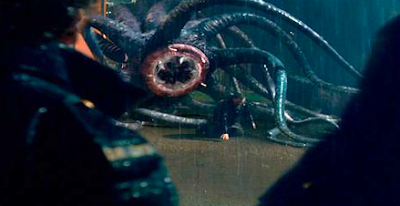 Grabbers never tries to be anything but a creature feature. It doesn't go for huge gags, or forced iconic comedy characters. It simply gets everything it tries to do absolutely right. And considering the number that have tried to mix comedy and horror and failed, that is massive achievement indeed.