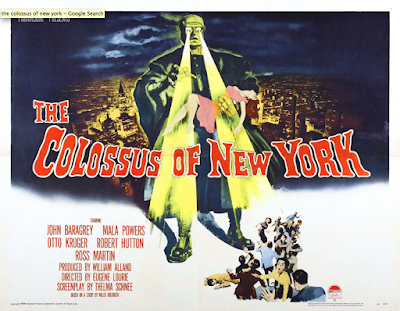 On the eve of announcing a scientific discovery of great humanitarian benefit a noble scientist is killed in a car accident. During the funeral service the deceased's Father, also a scientist, flips at the notion his son's death was part of some grand plan instead arguing it was a ridiculous and random death that robbed the world of a genius-level mind. He enlists the help of his surviving son, a innovative mechanical engineer, to build a robot body to keep the brain alive and mobile.

The central conflict for this fun b-movie is essentially science versus spiritualism. The Father argues that everything required to make a person who they are is housed in the brain and that the soul is a myth. With this in mind, the Father feels that merely keeping the brain alive will return his son and, more importantly, his son's work.

The conflict isn't rendered with any dramatic urgency for the most part of the movie. The ideologies are spoken out in literal terms and the rest of the movie is shot in wides so that it is clear where everyone is and what they are talking about at all times. As a result the film doesn't have a lot of energy or subtlety. Thankfully there are a lot of other things that it has going for it.
Even though the dialogue is clunky the acting is, for the most part, quite natural. The wife of the deceased is particularly good in what is a fairly conventional and thankless widow/object of desire character. The cinematography and script sometimes force the actors to veer a little towards the theatrical but there are moments when the naturalistic performances actually help create real people on screen.

The main selling point of this movie is the monster, a towering expressionistic robot that looks like it has lumbered right of the set off Fritz Lang's Metropolis. The style of the design is at odds with the rest of the production and, indeed, most of the designs being used in US sci-fi and horror movies of the era. Its glowing eyes and brain give it a bit of extra menace and the fizzing electrical sound that accompanies its emotional changes really make you feel like the monster is in constant pain. It is a frankly gorgeous creation and watching it emerge from a river, slyly step out of the shadows or blast a victim with its awesome War of the Worlds style eye beams is always a joy. 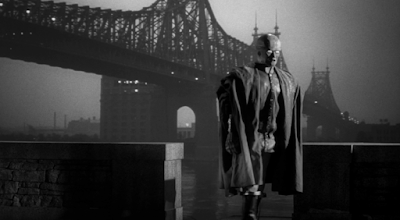 Of course the brain does not survive the process in quite the way the Father intended. To begin with it exhibits weird abilities, like an omnipotent consciousness and the ability to predict the future. When the robot sees his brother trying it on with his widowed wife it snaps. Big robot + odd powers + emotional betrayal = psycho-bot. And so its broken thought process leads it to eventually deciding that humanitarianism is for chumps. Since the needy of the world, or "human trash" as the colossus calls them, require the support of science they are effectively stopping progress. So the monster decides to wipe out all do-gooding scientists. This culminates in an awesome and brutal scene where the Colossus just indiscriminately mass- disintegrates scientists at a function. 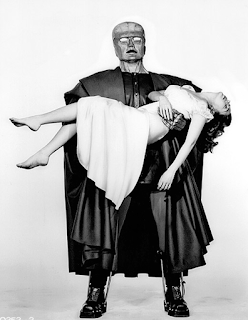 Alas it ends on a slightly less thrilling note. The Colossus'  is just turned off, while the morally questionable Father basically says "whoops, my bad" and walks away unpunished. The movie isn't a home run by any standard but the performances are engaging and the ideas strong, if unsubtle. It is the Colossus, however, that steals the movie.