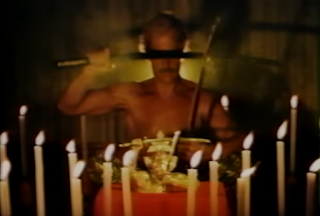 Writing a regular piece on ninja movies meant it was only going to be a matter of time before I had to discuss a movie produced by Godfrey Ho. Ho's name is more associated with ninja movies than even Sho Kosgui yet for less then laudable reasons. Ho has become known as the king of copy and paste movie making in that he essentially takes existing movies and splices in new footage of ninjas (or reuses his own footage, often featuring poor old Richard Harrison) while re-dubbing the whole affair to try and make some kind of logical sense of the mess. Some of these movies actually survive this process and although not good are at least reasonably cohesive. Diamond Ninja Force, however, is a different beast altogether.

Diamond Force Ninja seems to have been constructed using a haunted house movie, a couple of poorly orchestrated ninja fights and some footage of Richard Harrison from previous Godfrey Ho movies (yes, the Garfield phone makes a comeback). Neither Harrison or the ninjas interact at all with the cast of the haunted house movie save through the occasional telephone conversation and both strands of the story resolve themselves independently of each other. It's like someone has cut the fight scenes from Enter the Dragon into the Exorcist at random points, only if both of those movies were utter shit.

The plot used to paste these disparate narratives together is that the Black Ninja Clan have discovered that a property owner has dug up an ancient ninja burial ground that holds the secret to ultimate ninja power. They therefore decide to unleash some ninja devil magic on the owners of the land; the Wong family (George, Fanny and their son Bobo). This power essentially curses their home and creates the illusion that it is haunted. I say illusion, the ghosts do become sentient at one point. One ghost in particular likes to feel herself up while watching George and Fanny go at it even going as far to lure George off to a misty field to have a crack at him herself. All things considered that's a pretty specialised ninja ability. 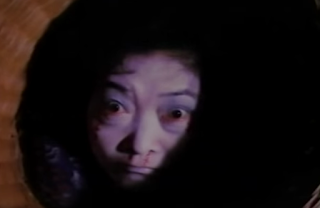 While these supernatural occurrences plague Fanny and her family Gordon (Harrison) holder of the Golden Ninja Warrior Statue and agent of the Ninja Diamond Force decides he is going to remotely protect them by hunting down the Black Ninja Clan: The least fearsome ninjas ever committed to film. The credentials required to be a ninja are somewhat relaxed in the Black Ninja Clan. I mean, these guys are typical members: 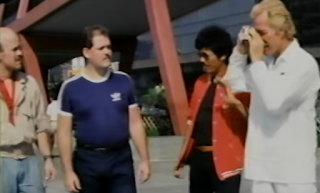 That's right, Fat Adidas, Bollywood Thriller and Bisto Dad are ninjas. Most of the bad guys hang out in tracksuits and other casual wear, look thoroughly out of shape, are largely white and exhibit little to no martial arts prowess at all. Harrison, on the other hand, rocks up in a red ninja suit, cartwheels about for a bit then kills them before signing off with his signature moustache reveal (his version of a mic drop). 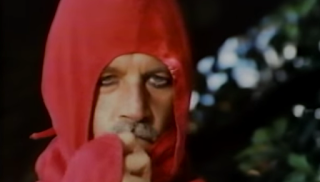 The musical score, no doubt also lifted from other movies, is awesome and at times sounds like it belongs in a Sega Megadrive game. There is one good shot, where Harrison's stunt double cartwheels out of the way of a thrown axe in slow motion, and the end fight is just about competent enough to be enjoyable. The finale to the horror section also exhibits some competency and atmosphere. Beyond that Force: Ninja Diamonds is so disjointed that neither narrative strand makes any sense at all. Don't get me wrong, it was the most fun 90 minutes I'd spent in a long time, but it curiously manages to achieve none of the basic criteria a movie should either as an exercise in traditional storytelling or as an abstract work. Diamond Ninjas are Forever Force has no commercial or artistic value at all. It does feel like an unsolved puzzle that provokes the occasional childish giggle, like someone has thrown a load of scrabble tiles on the floor resulting in some of them spelling rude words.

Ninja Mythology - The Golden Ninja Warrior statue bestows great powers on the owner, none of which shall be put to any practical use in any fight ever.

Favourite Non-sequiturs Possibly Generated by Poor Editing of Repurposed Footage - Fanny tries to fix her tap but manages to tear her skirt off completely. She ties it back on immediately and it is never mentioned again. Also, Richard Harrison have a pleasant chat with a poster of a bound and gagged woman behind him.

Fine Writing - "I've sent a magician to help you", "The reason you are here is for a very big plan" and "The treasure and the missing magic could be ours".

Overall rating: It defies all expectations of what a ninja movie would be, which is exactly what a ninja would do. So either 1 or 10.