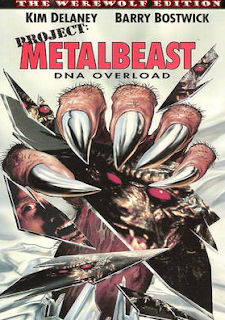 I imagine If I were to tell you the plot of Project: Metalbeast (AKA Metalbeast AKA Project: Metalbeast - DNA Overload) centred around a captured werewolf being cryogenically frozen only for its human form to be defrosted twenty years later and unknowingly used in military experiments to perfect a synthetic metal skin thereby resulting in an armoured werewolf stalking an army base the movie you might conjure in your mind would be pretty awesome. As is often the case with these kind of things the movie doesn't come close to living up to its potential.

The good news is the werewolf (and other make-up effects) are excellent. We get a fair bit of werewolfery in the opening scenes and the creature is a fully practical werewolf suit. Unfortunately after the wolf is put on ice we have to contend with forty-five minutes of nothing really happening. The military base is really just an experimental facility and is made up of generic looking office spaces and plain corridors. These locations aren't lit or shot in any evocative or atmospheric ways. The scenes that play out in these bland locations generally consist of a military advisor (played by Barry Megaforce Bostwick) bullying the scientists into taking huge risks and those scientists debating, in a very basic way, the morality of what they do. It plays out more like a procedural medical drama than a robot-werewolf on the loose movie. 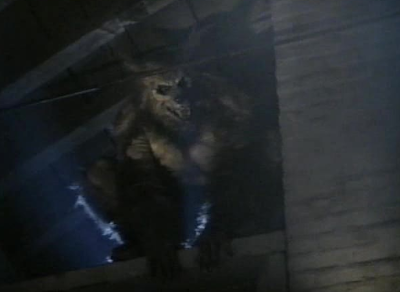 Of course the hope is that this is all a slow tease for when the wolf finally gets loose. When it does, at about the hour mark, it again squanders potential. The metal wolf suit is fun and worn well by icon Kane Hodder. The problem is that the movie never really takes time to effectively generate scares and all the kills are soft. Victims are often thrown around rooms or lifted out of frame so that we can hear, rather than see, them die. It lacks the inventiveness and gore of a slasher movie and actually plays only a little more brutal than your average Buffy episode. 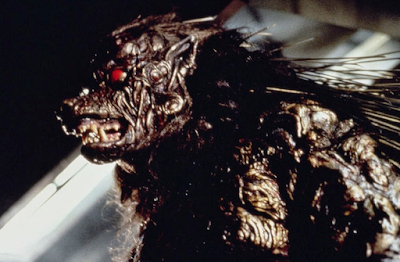 That is not to say the film is entirely without merit. The make-up, as I have already noted, is excellent throughout and Bostwick is clearly enjoying himself. In fact his demise is the most satisfying on-screen death of the movie. The Metalbeast tosses him around a little and claws at his face before lifting him into the air and pulling back its arm ready to deliver the final blow. While dangling above the ground and anticipating death, Bostwick actually takes time to fix his hair before having claws plunged through his chest. Again, it is not inventive or that gory, but it works and the hair-fixing injects some wry levity the rest of the movie really would have benefitted from.

The rest of the movie consists of the wolf chasing the leads around some generic boiler room sets until it is properly exploded by a silver-laden bazooka shell. It is a fun ending but not enough to make up for the lack of thrills in the rest of the movie.

One of the absolute highlights of the movie, however, is Conrad Pope's unapologetically bombastic orchestral score. It is an unusually big score for a movie of this scale. It is derivative at times, feeling very John Williams and in the case of some cues sounding like direct lifts from Michael Kamen's first two Die Hard scores (they aren't direct lifts, but very close) but in most cases the score elevates the material making it appear more exciting than it actually is.

Metalbeast is not without its pleasures and the final half hour is fun whatever way you look at it. The problem is you have sit through nearly sixty minutes of boring characters saying boring things in nondescript locales before you get to any of the good stuff.
Labels: Reviews