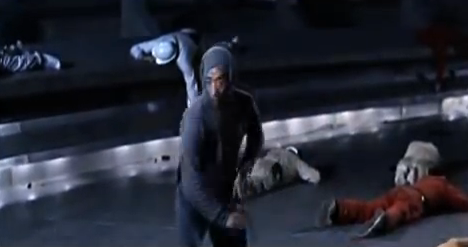 James Bond, the pride of Britain, fakes his death so he can travel to Japan, dress up as a Japanese person, sneer at women who he is not attracted to and kill whoever crosses his path. Part of this patriotic agenda is teaming up with a bunch of ninjas lead by his Japanese counterpart Tiger Tanaka. These range from traditional ninjas and samurai to modern gadget ‘n’ gun wielding assassins. Their moment to shine, however, is when they assault the villainous Blofeld’s secret volcano lair. It’s a Bond movie, so gore is as limited as problematic racial and sexual politics are abundant, but it is nice to see ninjas pop up and shine in a mainstream western movie a good fifteen years before they were popularised.

Ninja Mythology - Every ninja clan has a secret Sean Connery and here is a tip in case you want to spot one; they’ll be the one wearing racist make-up.