My biggest problem with the The Thing prequel/remake (you know, The Thing thing), was that is was almost exactly the same as Carpenter's movie just presented with a modern aesthetic. I nearly turned it off halfway through not because it was doing anything badly but because I felt I knew every beat in the narrative and because it was so similar it was impossible not to constantly compare it to its superior predecessor. I don't have a problem with remakes but sometimes I feel the productions would work so much better if they wasn't living in the shadow of something far greater.

Blood Glacier is an Austrian horror movie that is exactly what I wanted from The Thing prequel. Set at a research station in a remote frozen wasteland, a team of scientists discover an eerie blood red glacier. This discovery launches them into a fight for survival against a parasite that enters the body, mixes with the host DNA and then incubates a fast growing hybrid creature. As the parasite passes from created to creature it absorbs more and more DNA resulting in a parade of weird genetic mishaps that hunt our heroes down one by one.

Comparisons to The Thing are justified, but it is enough of its own movie to be judged alongside Carpenter's film rather than against it. The main difference here is that our main characters are not cut off entirely from civilisation. This results in a less claustrophobic film but it amps up the threat levels as the danger of the parasite infecting the rest of the world is far more imminent. It also allows the addition of more characters in the middle of the movie. Since more characters means more potential hybrid monsters this injects the movie with an added layer of tension rather than defusing what was already there. The DNA leeching parasite hook allows for some wonderfully bizarre creatures including an insect-like bird-of prey with an impressive feathered wing span and a lethal stinger. The monsters are mostly, if not entirely, practical and despite a couple of moments of rather over-enthusiastic puppeteering (for my money the goat monster would have looked far more imposing slowly raising its head out of the darkness) they are all the better for it. 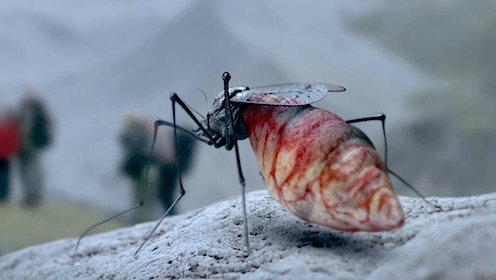 But it's the tone of the movie that makes it all the more watchable. It's a creature feature through and through and one that goes out of its way to give you a fun time. Crucially the sense of fun never over powers the tension. It is a little difficult to warm to the characters and there is an overriding feeling that there is something missing, but this is a well made monster movie that manages to feel both modern and classical at the same time. So if you feel like watching something like Carpenter's The Thing but want more than a slightly faded carbon copy, check out Blood Glacier. 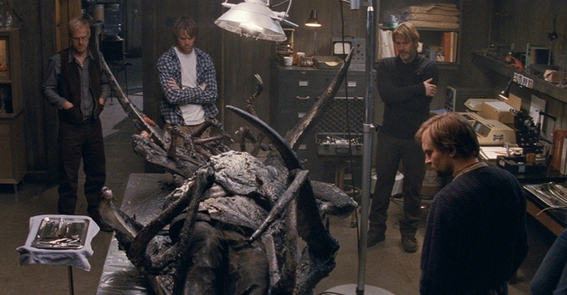