Skip to main content
Labels
Posted by Doctor Gogol May 07, 2017 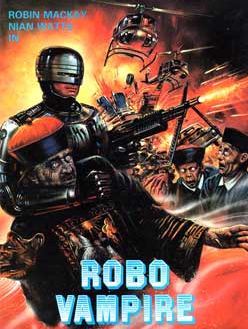 I continue my descent into the self inflicted chore that is the Robo-Warrior Trilogy. The second in this unofficial series is Robo Vampire, a movie that is significantly better than its predecessor in every possible way. That doesn't make it a good movie though.

The opening sequence is promising. A couple of soldiers march what I assume is a POW into a derelict jungle town only to be set upon by those hopping mad (*takes a bow*) Jiangshi. The location is detailed and evocative, the violence nicely handled and the leaping vampires aren't just painted cyan but actually caked in rotting flesh make-up. Liberal use of a smoke machine instantly adds production value and the beautifully weird detail of the vampires breathing puffs of smoke when then hiss evidences some thought has gone into this sequence. It feels very much in line with Italian zombie movies, even more so when the vampire doesn't just suck his victim's blood but rips a mouthful of meat out of his throat.

We then join a criminal gang who, as seems to be convention in this series of movies, wants to train vampires to help their heroin pipeline. This leads us to the mystical lair where the vampires are trained. This location again features atmosphere and strong make-up effects. It also at this point that the film got away from me a little.

I must confess the film wasn't holding my attention 100% but I expected some smoother transition to a sequence where a Chinese wizard fights a female ghost in a see-through dress in an alley way. The two supernatural combatants fly around the alley attempting to magic the crap out of each other leading to one move where the wizard slides backwards across the floor leaving a trail of sparks and fire from his feet like Back to the Future's Delorian. I think the female ghost is the deceased wife of the lead vampire and I'm pretty sure they reach a truce at the end of the scene. To what end I'm not sure. 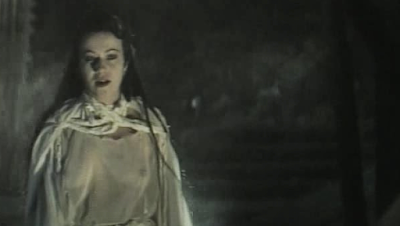 Doesn't matter because we suddenly find ourselves in a forest in a battle between drug runners and soldiers who loose the battle due to the appearance of the Jiangshi. One of the soldiers is mortally wounded and back at their base a difficult decision is made regarding the fate of their downed colleague:

Nurse
It was a fatal wound. He's dead.

The soldier bows his head in sadness and sighs.

Soldier
(Beat)
Since Tom's dead I'd like to make use of his body to make an android-like robot.

Following this tender and moving moment we get a montage of them building a robot solider. Since this appears to the the origin of the Robo-Warrior I'd imagine this movie is a remake of its first film a la Evil Dead 2. Please note this is merely my attempt to make some narrative sense of what we are seeing as this is by no means an actual coherent series of movies. The people making them can't establish a canon from scene to scene so to expect them to carry a through line from movie to movie is maybe asking a little too much.

The new Robo-Warrior seems to have had more effort put into his outfit though I would not say it is a better costume. It looks like he's had a bunch of pillows spray-painted silver and taped to him. It's awkward and wobbly and far more restrictive than the previous outfit. It is, however, far more derivative of Robocop both in the way he moves (a jerky robot movement) and the treatment of his voice. He doesn't do any martial arts either just shoots things with a very large machine gun. 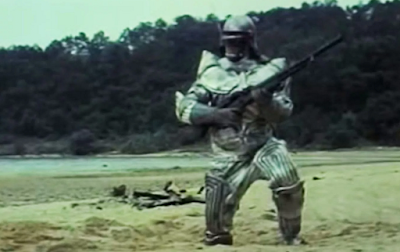 From this point on the movie is a bit of a blur. Characters are introduced and dispatched without any real sense of who they are. There is a kidnapping and rescue plot, lots of fairly competent shoot-outs, a gorilla-faced vampire that shoots fireworks out his arms and in the finale the female ghost returns, whips her top off and fights the wizard to the death.

If this movie, like its predecessor, was spliced from a number of disparate movies it is far more difficult to pick apart the separate pieces. I guess that is a good thing? Either way it still makes very little sense. It's better looking, gorier and the horror and fantasy elements work quite well though.

If this arc of improvement carries through to the final film of the series then I might be in for a fairly accomplished B-movie mash-up. I have high hopes* 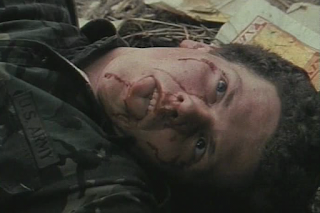 *Spoiler alert, I have already seen the third movie at the time of writing and it's fucking bullshit.