Skip to main content
Labels
Posted by Doctor Gogol May 01, 2017

I have long maintained that I have not grown out of my childhood but added to it. As such many of the things that thrilled me as a child still do. Like many I grew up with Star Wars. The interstellar adventures of that series, plus its many illegitimate offspring, filled me with images of crazy aliens, fearsome troopers and exciting cosmic dogfights. In science fiction there seemed to be no cap on imagination. Fantasy, on the other hand, wasn't quite as boundry-less. Of course the imagination was stimulated with sorcerers and monsters yet the locales seemed a lot closer to home. It wasn't much of a stretch to imagine the local wood was a mystical forest filled with warriors and mythical creatures while a metallic blade was far easier, and more visceral, to simulate than a laser one. Mixing the two therefore seemed like a no-brainer to me.
The distinction between the two genres is pretty thin but few movies have actually gone out of their way to take the conventions of both genres and mash them together in such a way that draws attention to itself. Unsurprisingly those that do I carry very close to my heart, irrespective of their objective successes. 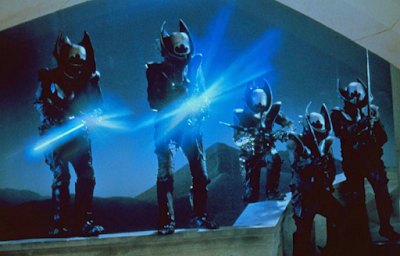 Krull is almost as straight a fantasy fairytale as one could ask for. The handsome prince and his bride to be are typical of children's fantasy stories as are the picturesque green hills and cute castles nestled within them. It is, at times, close to live action Disney. Thankfully a whacking great space castle lands in the midst of it all spewing forth laser-wielding stormtroopers. It's not quite an alien invasion meets fairytale movie (although someone needs to hurry up and make one) but the bizarre structure of the Black Fortress and the slightly-hi-tech armour and weaponry of the awesome Slayers (my personal favourite evil foot-solider) tip the balance to science fiction more than expected. The nightmarish leader, named The Beast, is a full on horror movie creature that also adds an edge that pulls the movie from light fantasy, even with all the flying horses and men in tights.
The movie isn't quite as propulsive or swashbuckling as it could be, the cast is excellent and all are game but never quite generate chemistry while Ergo, the comic relief, threatens to become the Jar-Jar of his day more than once.
It is the exciting design and utterly wonderful score by James Horner that elevates this stuff above most 80's fantasy movies while the inclusion of laser wielding stormtroopers and a gnarly space beast give the movie a particular electricity for me. It is one of my absolute faves and I'll glaive the shit out of anyone who judges me for it.

Masters of the Universe (Gary Goddard, 1987) 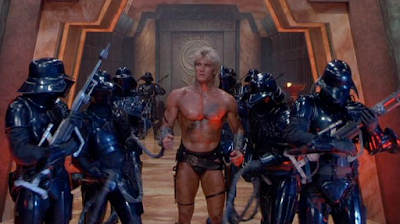 Stop looking at me like that. I know, this movie manages to be derivative of everything except the source material it was based on. It features an actor in the lead role that can barely articulate a sentence. The fish out of water shit not only gets old in a narrative sense but dates the film instantly. It ain't good, I know it.
There are lots of reasons why this film ended up the way it did. Massive budget cuts, restrictive notes from Hasbro and a whole spectrum of production issues meant that what was already probably a bad idea had no chance of coming out on top.
That being said I fucking love this movie. Lundgren's lines aren't delivered well but the dude looks the part. As in, he actually looks like a Boris Vallejo painting that graces the cover of a fantasy movie's VHS cover rather than the stringy feeble found within (I'm looking at you Deathstalker movies). Secondly I can't help but giggle with joy watching a proper movie barbarian hack away at armoured robot soldiers with a sword one minute, then zoom around on a flying disc blasting away with a laser gun the next.
Skeletor is the nuts as a part-sorcerer part-Vader big bad. His mercenaries are a mix of cyborg lizard-men and chain mail-wearing sword experts. Oh, and a werewolf with a laser gun.
Considering the movie was up against it money wise it is never afraid to go big and often manages this thanks to a familiar but rousing score by Bill Conti. The moment Skeletor arrives on Earth, flanked by legions of robo-troopers in his flying throne-ship while scored with Conti's own take on Holst's Mars the Bringer of War is absolutely exhilarating.
It's a shame they spend so much time on Earth as the conflict on the barren world of Eternia would have been a lot more thrilling, yet the mix of space opera and swordplay creates an anachronistic frisson that accompanied by its unashamed bombast manages to steam-roll right through any critical faculties I might have going into it. I love it. 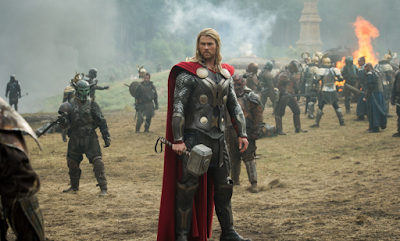 It may seem odd throwing a massively budgeted, populist summer blockbuster into the mix but the fact this movie is about a space viking with a magic hammer that is based on a comic book shows how little we appreciate the extent to which cult material now forms our mainstream diet. The Thor movies have always been presented as the runt of the Marvel litter appearing on favourites lists often only above The Incredible Hulk and Iron Man 2. I think this is unfair, especially with regards to the sequel.
It does have a weak villain and doesn't quite have the vibe the others Marvel movies have, but I remember during my first viewing thinking to myself "this is like Krull but with money behind it". After a CGI heavy prologue we are launched into a typical fantasy battle. Armoured warriors clash sword and axe with marauders. What differentiates this from your usual fantasy battle is the inclusion of laser bazookas. Add to this a giant rock monster and a god with an indestructible lightening hammer and you've got the stuff of heavy metal album covers.
The money and the visual effects supporting this film allow for the cohesion between genres to set a little more smoothly to the point where most audiences take the sights for granted. The assault on Asgard, for instance, plays like a big budget action scene as expected but features imagery not unlike that of the Lord of the Rings trilogy with lasers, space craft and flying boats thrown in.
For all the criticism thrown at Marvel's "bland" house-style it should have been given points for being so damn beautiful. Yes, The Guardians movies and Doctor Strange have given the third movie the confidence to go bold with colour and design but this movie has that as well. Some of Kirby's designs are right there in the marauder's armour and although colour doesn't soak the screen primary highlights pop in the back of almost every frame. This movie feels like what the other movies on my list wanted to be and although that might be lost on a lot of movie goers for those, like me, with particular tastes it is a thrill. 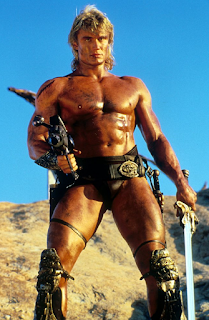