Skip to main content
Labels
Posted by Doctor Gogol May 16, 2017 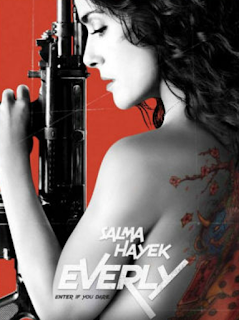 Die Hard has spawned a great number of offspring featuring any combination of sealed-off locations and wrong time/place dudes with a secret talent for anti-terrorism. Although Everly contains some of the same DNA as Die Hard, right down to the Christmas setting, it is by no means your average child. If Under Siege and the like are the Sawyer family, Everly is Leatherface.

Everly (Salma Hayek) is trapped in the apartment of a Yakuza boss, forced to be his lover through fear of reprisal on her Daughter. When it is discovered she has made contact with Police the boss sends waves of assassins after her. As the threat escalates Everly must find a way to get herself and her family out of the apartment and to safety. 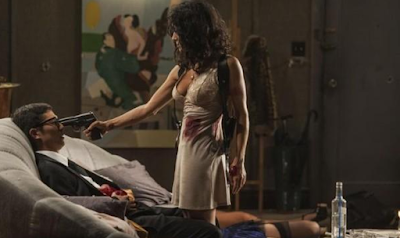 Everly begins in the immediate aftermath of a gruelling sexual assault. It is a tough place to start a movie and with a cinematic landscape full of abused women it is easy to feel a little distanced from the proceedings right from the opening. It is that landscape that is the issue more so than the treatment of the assault itself. Unlike many rape revenge movies this does not fetishise the act. The assault itself happens before the film starts meaning our titular character gets out of victim mode and right to the revenge part as quickly as possible.

It's clear Lynch isn't interested in cheap voyeurism not just by having the assault take place off screen but by his treatment of Everly's body and costume. Normally a character finds themselves losing both clothing and, depending on the severity of the action, flesh throughout an action movie. Although this stands to reason (explosions tend to damage clothes) it does mean that action movies often function as some perverse striptease with finely honed bodies getting more naked and sweatier as the violence escalates. In this case, however, Everly starts the movie completely naked and adds layers of clothing as the movie goes on. Sure, she gets her fair amount of damage, but the gradual adding of layers shows a systematic conditioning after the awful event that preceded the movie. We literally see Everly build her armour in front of us. 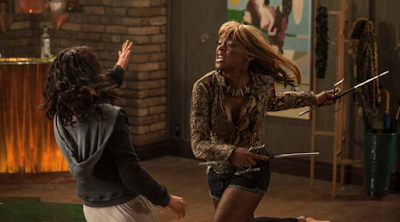 Filming around the sexual assault, so that we have effect more than cause, is by no means a cop-out or lack of conviction but a consistent aesthetic. Although the film never shys from the grotesque, the camera often parks on the outskirts of action. Characters vanish round corners or into doorways only to expel clouds of smoke and debris from within. Explosives are flung out of shot and broken bodies flung back in response. One especially satisfying set of kills happens behind closed doors while the collateral damage is viewed through security cameras. 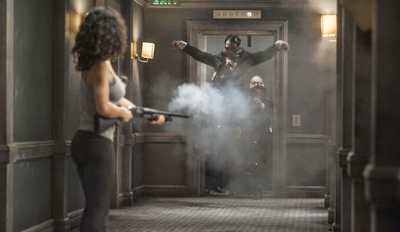 All of this is risky for an action movie and, attempted without skill, could be disappointing. I imagine there are many explosion hungry action movie lovers who might feel a little malnourished. Director Lynch's expertise in knowing how to block, frame and cut this kind of action means that it is beautifully rendered. The timing of the sequences is razor sharp and manages to be both brutal and very funny in equal measure.

And it is nowhere near as risky as the utterly insane middle segment of the film. I don't want to say to much as you'll get some pleasure out of wondering what the hell is unfolding in front of you but I don't think I'll be leading you astray if I tell you it kind of feels a little like Big Trouble in Little China played as straight horror. 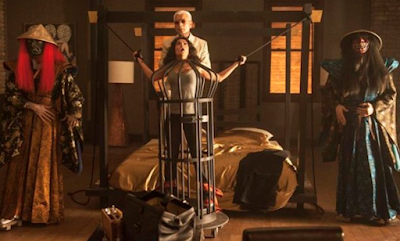 When you have a single character in limited locations you need a real talent to hold it all together. Hayek is incredible in this movie. She walks a precision line allowing her to play vulnerable and badass while reacting to brutal reality and almost cartoonish absurdity without ever feeling inconsistent. She has a real Pam Grier vibe throughout and I'd love to see her in more of these kind of roles. 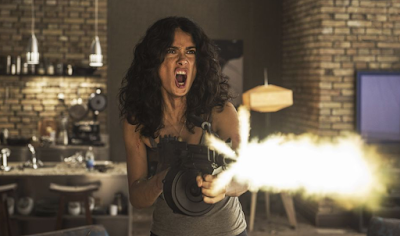 Everly might leave your more traditional action fan cold as it is far from conventional. Yet for a movie that takes so many risks, not just in the more bizarre moments but in the very meddling with action vernacular, it features action that puts most competitors to shame.