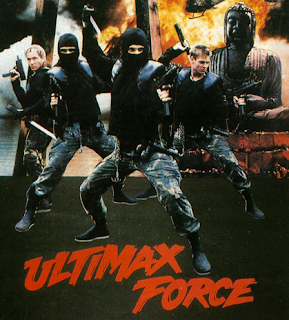 I approached my first ever viewing of Ultimax Force with great trepidation as its exciting cover was a childhood fascination of mine and I knew that it could not possibly live up to the epic gore-soaked ninja war that I'd imagined all those years ago. A far cry from the masterpiece I'd concocted it is by no means a chore to sit through and, above all else, the action that fills the bulk of its running time is efficient and, at times, exciting.
Ultimax Force, no doubt labelled so because they are ultimate to the max, are comprised of four army vets who have also studied the ways of the ninja. Like a lot of 80's war movies they have been re-activated to go back to the jungles of Asia to liberate abandoned POWs. An early ninja training session gives way to half hour of mucking about trying to get into the country but once all that stuff is out of the way it is non-stop action. To the max... the ulti-max.
Most of the action is military based and involves uzis and grenades being flung left right and centre. Swords and chains are used occasionally but it's mostly bullets that fill the screen. Thankfully the shoot-outs are nicely handled. The crowning moment is when one of the team leaps off of a hut and somersaults into a crowd of soldiers flinging grenades from both hands. It is perhaps the most ill-advised manoeuvre ever conceived and, unsurprisingly, results in the team member getting gunned down in slow motion, to the max.
The force get their own back, however, by leaping from their hastily made pits beneath the ground and uzi-ing the living shit out of their teammate's murderers. This is the closest we get to any real ninja abilities, although the silencers they attach to their weapons make them sound like laser guns. I'm not sure that odd foley is strictly a ninja power though. Speaking of sound effects it would be remiss of me not to mention the hilarious mortar launching sound effect that sounds less like artillery and more like someone firing a conker from their arsehole.
What earns this movie significant points (beyond the compromising nostalgia linked with the poster) is the costumes. Part military body armour, part traditional ninja outfit they look fantastic to the max in every frame (even if the leader looks a bit like Benny from Abba) and is a literal translation of the mental image I had of myself during every game of childhood war I ever played.
Ultimate costumes, maximum action, ultimate maximum force. Ultimax Force.


Ninja Abilities – Somersaults, leaping from under the ground.

Ninja Mythology - Ninja teams carry straws of different lengths to randomly determine who leaps absurdly into the path of bullets. They call them 'sacrifice pipes'.